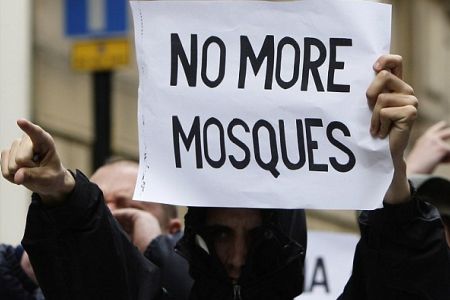 Islam is a religion of peace, free from disquieting and excruciating thoughts. It not only forbids the mischief on earth but also allows the followers of other religions to live in the Islamic state and practice their religion without any pressure of changing faith. In Islam, peace is the only rule and war has always remained the exception. But it’s a lamentable situation that in today’s time the word Islam is being associated with terror, mass killing, kidnapping,suicide bombing and other most vicious acts whose prohibition in Islam is very clear.

It took only few years for people to change their perception of Islam from the most peaceful religion to something which ratifies violence. Thanks to today’s media and the bewildering conspiracies of which gave the world enough reasons to impeach the peaceful nature of Islam.

Imagine this, you went to a shopping mall with your family and as you entered, your presence magnetized most of the peoples’ attention. Some felt insecure while others had a fear. People started gazing at your children and wife thinking of you as an enemy of humanity. You wouldn’t be surprised, because such reactions for a practicing Muslim are very common. Islamophobia (fear of Muslims) is spreading like a wildfire, some believed that it’s a result of September 11 attacks on World Trade Centre while others associated it with the growing population of Muslims in Western nations.

The recent outbreak of ISIS “Islamic State of Iraq and Syria” under the leadership of Abu Bakr Al-Baghdadi known for their mass execution has again resulted in questioning the acceptability of Islam as a peaceful religion. Many conspiracy theories have erupted revealing the support of USA behind the existence of ISIS with the aim of disrupting the Middle East. An alleged linkage of Abu BakrAl-Baghdadi with the national intelligence agency of Israel, “Mossad” is also gaining attention. The members of ISIS are always veiled, they can be anyone, who knows? Another self-claimed Islamic group“Boko Haram” in Nigeria has caused mayhem through a wave of bombings, assassinations and abductions. In April 2014, they kidnapped 276 female students from the Government Secondary School in the town of Chibok in Borno State of Nigeria.

Such recent events and the claims of their occurrence in the name of Islam have resulted in baneful outcomes.  Muslim minorities living under the rule of non-Muslims are facing a severe crisis. In various towns and villages of southern Xinjiang of China, Muslims are living under the most direful and un-wanted circumstances. “Throughout Ramandan, police intensified a campaign of house-to-house searches, looking for books or clothing that betrays “conservative” religious beliefs among the region’s ethnic Uighurs, women wearing veils were widely detained, and many young men arrested on the slightest pretext, residents say. Students and civil servants were forced to eat instead of fasting, and work or attend classes instead of attending Friday prayers” An excerpt from the article “China’s war on terror becomes all-out attack on Islam in Xinjiang ” published in the month of September in Washington post.

Even in Australia, the Muslim women fear for their safety. The Burqa or veil in Australia is considered culturally obstructive and a sign of oppression of Muslim women. In the aftermath of 9/11, a number of political leaders and public commentators publicly professed that wearing Burqa or veil is un-Australian. Women are completely defenseless and vulnerable in public spaces and are now faced with being forced to remove their veils under threat of violence.Due to the rising anti-Islam sentiments and Islamophobic crimes against Muslim minorities in France, the French Muslim groups have also urged that government to take a stronger position to tackle such noxious acts of violence.

In many parts of the world, Muslim properties are vandalized. In Srilanka, Muslims account for only 10 percent of the population and last year a mob of hundreds of Buddhist extremists set fire to a clothing store and warehouse owned by Muslims in Pepiliyana, a suburb of the capital of Colombo. Much to our dismay, the mosques are also being targeted by Vandals – spray-painting abusive messages of hate. Many such incidents have been reported in Indonesia, Sweden, India, USA and other parts of the world.

The fear of Muslims in the USA and various other countries is on the rise. Many non-government organizations and political groups have come up with various campaigns to defame the true nature of Islam. Some do it for political gains while others out of their misinterpretation of Islam. The 969 Movement in Burma is strongly opposing the existence of Muslims in their region who belong to the ethnic group of Rohingya, this movement contributed to a situation that resulted in the killing of hundreds of Muslims and left thousands displaced. Another anti-Islamic group EDL “English Defense League” in the UK is known for their street demonstrations and other campaigns against the spread of Islamism and Sharia. Anti-Muslim hate groups are a relatively new phenomenon in every part of the world, they have only one thing in common they don’t want Muslims to be part of their countries. Jihad Watch, Bare Naked Islam, Escaping Islam, Islamthreat.com, Sharia Awareness Action Network, Islam: the Religion of Peace (and a big stack of dead bodies), Prophet of Doom, Christian Phalange, US defense league, Aggressive Christianity, Freedom defense league, Stop the Islamization in America, Radio Jihad and the list goes on, are a few among the most vicious organizations whose sole reason of existence is to eradicate Islam from the world and spread hatred and falsehood about Islam. India has also joined the race of defaming Islam. The hate-filled speeches of political leaders and their new propaganda of “Love Jihad” are also creating havoc for Muslims in the country.

Now who would tell these ignorant people that Islam condemns the killing of innocents, kidnapping, and suicide bombing? Who would go to each and every American and tell them it was your government who attacked World Trade Centre, so that they would get legitimized reason to attack Afganistan and other Middle East countries? Who would go to the leaders of ISIS and Boko Haram and ask them where it’s written in our books to kill and kidnap innocent human beings? Who would convey to each and every person in the world that Islam promotes peace and justice not decimation? Who would make the world understand that Islamic Sacred Law promotes justice by giving all members of society their rights? Who can do that without real knowledge?

In that regard, the growing reliance on online sources is very harmful. A few years ago, I read an article on the internet about the unacceptability of Hadith as an authentic source of knowledge. It was crafted so beautifully and the wording was so powerful that after reading it one could easily find one’s self in the state of great confusion. Honestly speaking, almost for one month I stopped reading Hadiths, and doubted about their authenticity.Later, when I had a discussion with a student of knowledge, I came to know that the article many things which have no association with Islam which otherwise I believed because of my ignorance. If a person doesn’t have a sound knowledge of Islam, he/she can easily be turned into someone who opposes the truth. It is thus very important to rely only on authentic sources for comprehending our religion otherwise chances are that we can only bring harm rather than any good to our community. And now is not the time to be content with that kind of risk.

West can go to any extreme for defaming our religion. They use falsehood to destroy our brotherhood, but we use the message of Allah for reverting them to become part of our brotherhood.Most of the people who earlier hated Islam later became part of Islam. Due to our ignorance most of the times we too misrepresent Islam, but the one who wants to know true Islam should travel back by 1400 years. This can be possible only by studying Quran and other authentic books of Islam.