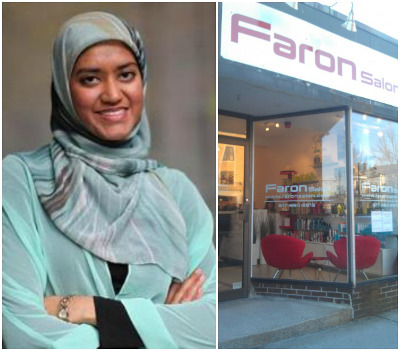 For some haircuts, Zaynah Qutubuddin and her stylist squeezed into the salon’s break room, beside the trashcan, the microwave, and the bathroom door — a private, if dim, substitute for the studio with big mirrors.

Sometimes her mother — a psychiatrist, not a stylist — trimmed her hair. Once, Qutubuddin tried a salon that agreed to book only other female clients while she was there but neglected to mention their male employee.

Muslim women like Qutubuddin, who wear the headscarf known as a hijab, confront a difficult challenge when it’s time for a hair cut. Male stylists are out, since Muslim women remove their hijabs only around women or around men in their immediate families. And even at women-run salons, a male client could pop in at any moment.

“Islam is also about cleanliness and modesty while being covered,” Qutubuddin said. “When you don’t have a place to go, that is a hindrance.”

Slowly, as the number of Muslims in the area has grown, things are beginning to change. Not long ago, in Cambridge, a salon opened on Massachusetts Avenue near Porter Square, advertising its studio as “hijab-friendly.” The studio, called Faron Salon, has a private room for women who cover their hair.

Here, Qutubuddin, 28, has settled into a room with all the same conveniences as the rest of the salon: red chair with hydraulic lift, hair-washing station, dryer, mirror, and magazine rack. The door is marked “private.” She uncovers without worrying that a male employee or client will glimpse her hair.

Although Faron, which opened last year, may be the first to advertise its “hijab-friendly” room, Muslim women have been finding ways over the years to create zones of privacy for themselves. The names of sympathetic stylists get passed along, woman to woman.

At Ojee’s in the Back Bay, owner Ojee Hosein has been styling Muslim women’s hair for decades in the basement, where she has two shampoo bowls and two cutting stations. Her employees know they have to ask before they come downstairs.

“When I have a sister, I don’t let anyone come down until I finish,” said Hosein, who grew up Muslim in Trinidad and Tobago and often covers her hair on the street, but not at work.

Other women prefer to have their hair cut in their homes. Jill Alban, born in Brazil, has become well-known among hijabis for traveling from her home in Quincy to their houses to cut their hair. About 85 percent of her clients are Muslim.

Alban is opening her own salon in Braintree in a few weeks and she, too, has created a private room for her Muslim clients. “Only girls are allowed to come into this place,” she said.

When Suzan El-Rayess decided to begin wearing the hijab as a graduate student at Columbia University, she had to give up her hairdresser, who was a man. He was “a complete artist and I loved how he cut my hair,” said El-Rayess, who grew up in Winchester. “But I guess priorities shift.”

This, after all, why was she decided to start wearing the headscarf: She felt that she was defined too often by the way she looked, not by what she thought or what she did.

Faron Fares, the owner of Faron Salon in Cambridge, was stunned a few years ago to learn of the difficulty Muslim women who wear the hijab face when they try to get haircuts. Fares’s Egyptian husband is Muslim, as is she.

At her previous salon, in Harvard Square, Fares began to offer special Sunday appointments, when the salon was closed, for women who wanted privacy. When she moved her business closer to Porter Square, she built in the separate room.

“I’m very proud of this room,” said Fares, who was born in Cambodia. “I’m a woman and we should all feel absolutely fabulous at any time.”

She posted fliers at local mosques, advertising her services. Recently, in the weeks before Eid, an important Muslim holiday, she had two Muslim customers a day, twice the normal number, she said.

Non-Muslim customers have also asked to get their hair done in the room, including women who are receiving chemotherapy for cancer that has caused their hair to fall out.

Not everyone has supported her work. After she opened the room, she said, “I have some backlash” from a few of her other clients, asking why she would cater to Muslims. “I educate them,” Fares said. She explained why some Muslim women cover their hair, and why privacy is important to them. This appeased most of her angry clients, she said.

About 36 percent of Muslim women in the United States say they always wear the hijab when they are out in public, according to the Pew Research Center. (Another 24 percent say they wear the hijab most or some of the time.) The center estimates that about 45 percent of the country’s 1.8 Muslims are women.

Homa, a Muslim woman who lives in Boston and spoke on the condition that her last name not be used, was also a veteran of the search for a female-only haircut at other salons.

“I would go earlier or after hours and request if the salon had a back room,” she said. “It didn’t always work out so well. Someone would walk in.”

Qutubuddin, who only leaves her Cambridge apartment with her hair covered, has been wearing the hijab for a decade. Her mother does not wear the hijab; her younger sister began covering her hair in seventh grade.

As a freshman at Virginia Commonwealth University, Qutubuddin decided this felt like the next step in fulfilling her religion’s dictate to dress and act modestly. Once she started, she noticed that she got fewer catcalls than her non-Muslim friends.

Qutubuddin wrote about her experience at Faron Salon on her blog, relieved to end her search for a salon that could accommodate her.

“And how awkward is it to call up and ask, ‘Hey, so when I make an appointment with you, could you not book any dudes at the same time?’” she wrote.