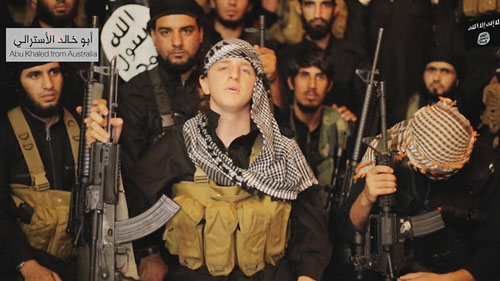 Leaders of Australia Muslim community have strongly condemned the threats made against their country by fighters of the so-called “Islamic State” or ISIL, deploring the group’s use of Islam as a “cover” for their atrocities.

“We condemn in the strongest possible terms any threat against Australians and reiterate the position of His Eminence, the Grand Mufti of Australia, Dr Ibrahim Abu Mohammad, who previously said: ‘The recent so‐called ‘fatwa’ from overseas making reference to Australia as a target has no religious authority and must be rejected’,” the statement was quoted by Sydney Morning Herald on Tuesday, October 21.

“On this occasion, Dr Abu Mohammad said: “It is utterly deplorable for violent extremists to use Islam as a cover for their crimes and atrocities.

“Their misguided actions do not represent the overwhelming majority of Muslims who emulate the pure teachings of Islam such as justice, mercy and freedom.”

The angry statement, signed by leading Muslim organizations, followed the release of a video on Tuesday showing a man with an Australian accent is shown holding a rifle and wearing military clothing.

The man, named on the video as Abu Khaled from Australia, showed him surrounded by dozens of armed and masked fighters and making threats to the US, UK and Australia.

The man in the video later directed part of his two-minute message to Western leaders, among them Prime Minister Tony Abbott.

“To the leaders, to Obama, to Tony Abbott, I say this: These weapons that we have, these soldiers, we will not stop fighting, we will not put down our weapons until we reach your lands, until we take the head of every tyrant and unti the black flag is flying high in every single land,” he says.

The Muslim leaders demanded an urgent action to find out how young people became radicalized.

“We believe that there is an urgent need to examine how this 17 year‐old youth felt the need to leave the country and fight with a proscribed terrorist organization overseas,” the statement by Muslim groups read.

“It is also imperative that the government commits further resources into addressing the root causes of radicalization which need to be identified and adequately addressed.”

The speaker in the video is believed to be 17-year-old Abdullah Elmir from Western Sydney who ran away from home some four months ago.

Abdullah hasn’t been seen since June after telling his mother he was going fishing.

Later, he sent a text message to a family member asking them to tell his mother he had “gone”.

Elmir family lawyer Zali Burrows says the government had photos of Abdullah clearing customs and that it may have been tracking him to see how fighters are recruited.

The Prime Minister’s Office has issued a statement, saying the video highlights the “very real threat” posed by ISIL.

“As the Prime Minister has said on many occasions, IS [ISIL] is a threat that reaches out to Australia and our allies and partners,” it reads.

“That is why Australia has joined the Coalition to disrupt and degrade IS in Iraq and is giving our law enforcement and security agencies the powers and resources they need to keep Australia and Australians as safe as possible.

“Australians should continue to be confident to go about their daily lives as normal.”