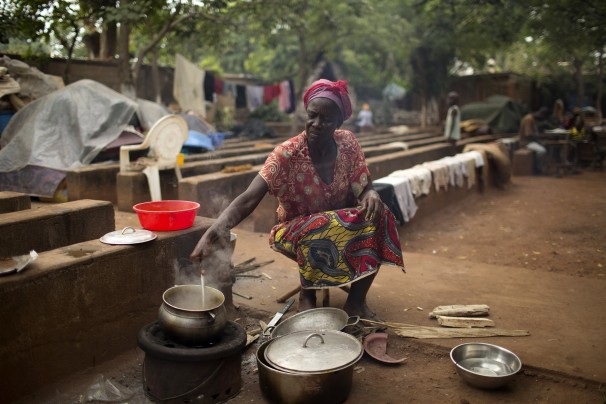 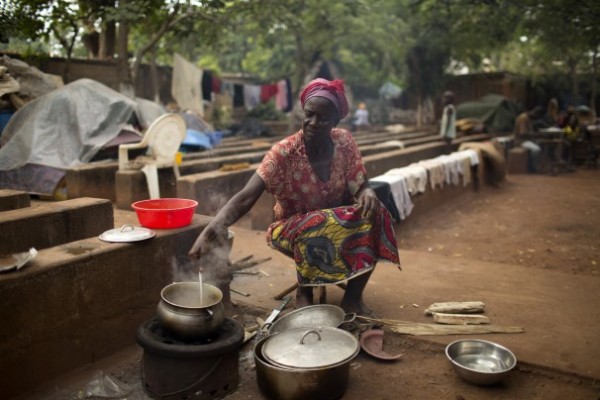 BANGUI, Central African ­Republic — The door is unhinged and the rooms are bare, signs of that afternoon when Christian vigilantes arrived at Henriette Oumpo’s mud-brick house to kill her husband.

“They broke down the door,” she recalled, her face etched in grief, “and they began searching for him.”

Her husband, who is a Muslim, escaped through a back window. Clutching knives, the fighters looted the couple’s possessions. Then they prepared to kill Oumpo, 60, and burn the house down. But some neighbors intervened and informed the fighters that she was a Christian by birth. So they spared her life on one condition.

“Renounce Islam,” one of her attackers said as they left. “Or else we will return and kill you for marrying a Muslim.”

Marriages between Christians and Muslims have survived the chaotic upheavals that the Central African Republic has endured since gaining independence from France, the former colonial power, in 1960. But the latest cataclysm is shattering these mixed unions, dividing families and communities. U.N. officials and aid workers are worried that the brutality and vengeance could permanently destroy the relationships between Christians and Muslims here.

Today, Oumpo’s husband, Idriss Alaas Muhamed, lives in a bleak enclave of charred and looted shops and houses called PK5. It’s one of the last remaining Muslim areas in a capital paralyzed by religion-based hatred and violence.

The couple’s 11 children, ages 22 to 40, also have fled their homes. One son was killed by a Christian mob as he walked to work in mid-January.

“I have lived in this place for 40 years, and all my children were born here,” said Muhamed, 67, perched on a bench across from a mosque compound crowded with refugees. “I never expected this. None of us did.”

The attacks that have killed thousands and displaced hundreds of thousands began with a coup one year ago. As Muslims seized power for the first time in this Christian-majority nation last March, they brutally targeted Christians. In response, Christian militias rose up and targeted Muslim enclaves. Their assaults intensified after the country’s first Muslim president, Michel Djotodia, resigned in January under pressure from regional leaders.

Shadowed by fear, tens of thousands of Muslims have fled the country. Entire Muslim neighborhoods have emptied out, homes have been torched, bodies have been set afire in streets. As the exodus continues, more mixed families are likely to be shattered, U.N. officials and aid workers say.

During a recent visit to the northern town of Kaga Bandoro, Dieng recalled meeting an imam who was married to a Christian. The Muslim prayer leader was fleeing to neighboring Chad but leaving his wife behind, an act that would have been unthinkable a year ago.

“The tendency is they don’t leave the families behind,” Dieng said. “They take them with them.”

Abdel Hafiss is trying to do just that.

He is Muslim. His wife is Christian. They have been married for two decades and have seven children. Five months ago, Christian militias raided their neighborhood, on the outskirts of Bangui, the capital. Hafiss fled, but his wife stayed to protect their house. Three of their children left with him, and four stayed with his wife.

Today, Hafiss, 40, and the three children live in a mosque. It is only five miles from his home, but a visit there could get him killed. The Christian vigilantes reign over his community. He hasn’t seen his wife and four other children since he fled. And they cannot visit him without risking the wrath of the vigilantes.

Hafiss, a slim, mild-mannered teacher, senses that his family is disintegrating. For months, he has been trying to persuade his wife by cellphone to flee to Chad with all their children. But she has refused. Chad is a predominantly Muslim nation, and she is worried about abandoning the only home she has known in her adult life.

“My wife says, ‘If we leave, they will destroy our house,’ ” Hafiss said. “I told her, ‘Our life together or the house: Which is more important?’ ”

Hafiss knows he must leave. The mosque is constantly attacked by Christian militias, known as anti-balaka, or “anti-
machete” in the local Sango language. On a recent day, a boy was hacked to death.

Now and then, Haffis’s mind drifts back to a better time. “I was a student when we married. I visited her family. She visited mine. She was welcomed in my family. I was welcomed in hers,” he recalled. “Christians and Muslims lived in peace. That is all gone now.”

As in most African nations, tribal identity is more important here than national and religious affiliations. Muslims and Christians can be found in most tribes in the Central African Republic. Many people marry outside their faith, and it’s not uncommon for one partner to retain his or her religion rather than convert.

But these days religious identity is trumping tribal identity.

Take Herve Ouassiri’s predicament. When he was in his 20s, he converted to Islam. At the mosque, he was known as Abubakar. His Christian in-laws embraced him. But several months ago, as Christian militias took control of his neighborhood, his relatives gave him an ultimatum: Convert back to Christianity or else.

So Ouassiri fled the area and returned to his father’s home, along with his Christian wife and baby son. His in-laws have severed all contact with them. Ouassiri and his wife spend their days inside the compound and have not left the neighborhood. They fear the in-laws might target them.

“They want to force me to stop going to the mosque,” said Ouassiri, 43. “I don’t know what they will do to me if they find me praying. They might try to kill me.”

That’s what happened to Alpha Passi. The 37-year-old Muslim shopkeeper lived with his Christian girlfriend, Eugenie, and his two boys from a previous marriage.

“Eugenie was like my mother,” said Abache, Passi’s teenage son.

The couple had an argument so loud that neighbors could hear them. Passi ordered Eugenie to leave the house. Neighbors recalled the words she screamed when she was outside: “This will be the last time for you to have a girlfriend.” Then she left.

That evening, Christian vigilantes showed up at the house. They said they were Eugenie’s relatives and had come to pick up her belongings, recalled neighbors and Abache. The fighters also accused Passi of harboring some Seleka Muslim rebels. Passi told them to return in the morning. But they fired bullets through the door. Passi and Abache hit the floor.

There was a long silence. Thinking that his assailants had left, Passi stepped out onto the porch. From behind a tree, the gunmen took aim.

“They shot him dead,” Abache said.

Passi is buried in a grave next to his house. Eugenie has vanished.

Around Bangui, a seismic social shift is underway. Muslims are leaving mixed areas; Christians are taking their place.

Seated outside her house on a recent day, Oumpo’s face was filled with anguish. She has made a difficult decision.

Muhamed has decided to leave for Chad, but she won’t join him. She knows no one there. “When he leaves, it’s finished,” she said. “We will never see each other again.”

She hopes to live with relatives in a Christian neighborhood. But she is worried that they may no longer accept her because she converted to Islam. “If they don’t welcome me, I will go somewhere else,” Oumpo said.

Wherever she goes, the vigilante’s ultimatum will haunt her. She has already given up the head scarf worn by many Muslim women. “I will not wear any Muslim clothes. I will not go to a mosque,” she said. “I will pretend I am a Christian.”