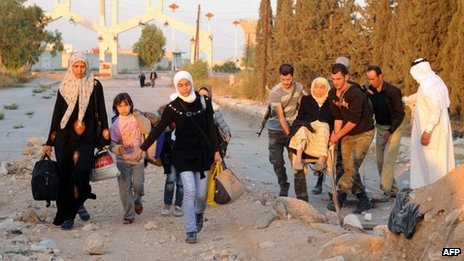 A group of Syrian clerics have issued a ruling – or fatwa – allowing people living in besieged suburbs of Damascus to eat meat that is normally forbidden.

In a video, the Muslim clerics said people could eat cats, dogs and donkeys to stave off hunger.

The fatwa comes amid reports of starvation in the besieged, rebel-held Damascus suburb of Muadhamiya.

Aid agencies have urged the government to allow humanitarian supplies to the area, where many residents are trapped.

Hundreds of civilians, some carried on stretchers, were able to flee Muadhamiya at the weekend following a temporary ceasefire.

In a message to coincide with the Muslim holiday of Eid al-Adha – normally a time for celebration and feasting – the religious leaders authorized those left in the Ghouta agricultural belt around Damascus to eat animals usually considered unfit for human consumption in Islam.

The clerics said it was a cry for help to the whole world, adding that if the situation continued to deteriorate, the living would have to eat the dead.

It is not the first such fatwa issued in the Syrian conflict.

Similar religious edicts were announced in Homs and Aleppo when the fighting in those cities was at its fiercest.

Aid agencies have said that providing food and aid to areas under attack should be as much a priority as the programme to dismantle Syria’s chemical weapons arsenal.

The general director of Medecins Sans Frontieres (MSF), Christopher Stokes, has described it as an “absurd” situation when chemical weapons inspectors are able to drive freely through areas in desperate need while aid convoys are blocked.

Hundreds of people were killed on 21 August when rockets filled with the nerve agent were fired at the suburbs of Zamalka, Ein Tarma and Muadhamiya. The inspectors did not establish who was responsible, but the government and rebels have blamed each other.