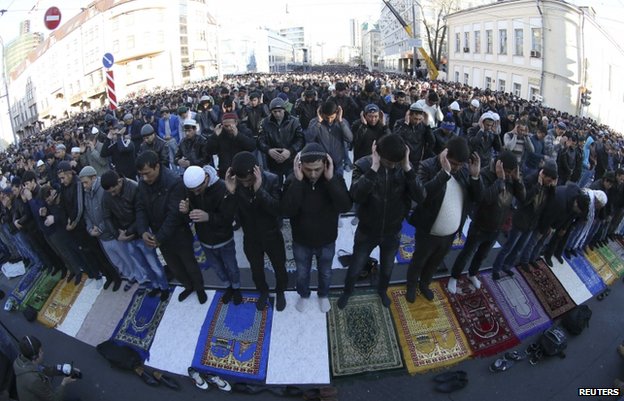 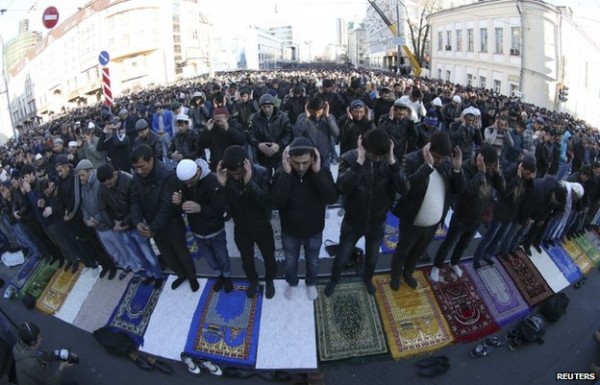 Moscow is now home to 2 million Muslims – more than any other city in Europe.

So when the faithful gathered Tuesday for the start of the Eid al-Adha holiday, tens of thousands of men unrolled their prayer mats on the asphalt of Moscow’s streets. Last year, they prayed outside in rain and snow.

Looming overhead were the new minarets of the Moscow Cathedral Mosque, a century-old mosque that is now being expanded. It is one of only four mosques in all of Moscow.

“Certainly mosques are needed. Mosques are needed in each micro-district,” said Abdul Bari Sultanov, a Russian Muslim from Tatarstan, a historically Muslim region, after prayers Tuesday. “As well as madrassas, schools, imams so that people would be morally prepared for meeting their God.”

“They understand the politics of suppression — direct suppression,” said Dzhemal, who has criticized Moscow’s policy on Islam since the Soviet days. “And they don’t understand that this will create problems for themselves much worse then those they are trying to understand now.”

Moscow Mayor Sergei Sobyanin has vowed that no new mosques will be built in Moscow. He claims that the Muslims praying in streets on holidays are largely Central Asians, guest workers who will eventually go home.

“It has turned out that the praying Muslims are not at all Russian citizens and they are not Moscow residents,” Sobyanin recently told Ekho Moskvi. “They are labor migrants. There are only 10 percent of Moscow residents among them and building mosques for everyone who wants it – I think this will be over the top,” continued the mayor.

“Muscovites now get irritated by people who speak a different language, have different manners, with aggressive behavior,” he added.

The spark that set off the incident was the stabbing death last week of a young Slavic Russian man. An immigrant from Azerbaijan was arrested in the case on Tuesday.

Analysts called the anti-immigrant riot a modern day pogrom. While police released most of the rioters, they detained 2,000 migrant workers for identity checks. Politicians called for banning apartment sales to foreigners and for imposing visa restrictions on migrants from the southern Muslim nations that only a generation ago were part of the Soviet Union.

After the collapse of the Soviet Union, Isolda Kukushkina moved to Moscow from Ukraine, a nation often seen as Russia’s cultural and religious cradle. On Tuesday, near the Moscow Cathedral, she looked at the rivers of Muslim men who flowed past her Orthodox Church, dedicated to St. Philip and worried about Moscow’s future.

“It will be Muslim, I am afraid,” she said. “Believe me I like them, but Moscow must be Slavic. It should be somehow balanced. But this influx of immigrants influences our life in a bad way,” said Kukushkina.

For now, Moscow’s future is playing out on the streets, defined by prayers – and pogroms.