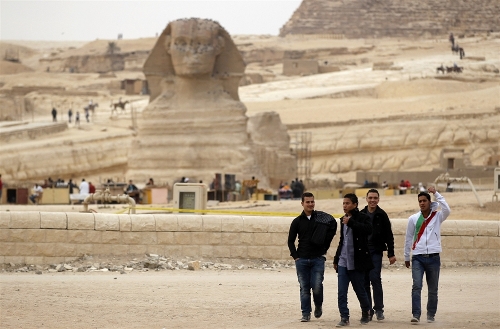 Egypt may install security cameras at tourist sites to deter militants from targeting visitors, the Interior Ministry spokesman said on Tuesday, Oct 8, just hours after suspected Islamists mounted another fatal attack on police, according to Reuters.

“There’s a security plan in place in tourist areas that will maintain stability in these areas and there is complete coordination,” said the spokesman, Hany Abdel Latif.

“We expected all these problems because we are in a war against terrorism,” he said without elaborating.

The attacks are the most sustained since an Islamist insurgency that was crushed by then-President Hosni Mubarak in the 1990s, when militants killed tourists, government officials and policemen. A total of about 1,200 people died on both sides.

Gunmen killed a police officer and wounded another in the Suez Canal city of Port Said on Tuesday, security sources said. The police were guarding a customs office south of the city.

Political turmoil and bouts of violence have hammered the tourism industry, a traditional pillar of Egypt’s economy and a main source of foreign currency, since Mubarak’s fall in 2011.

Militant attacks have multiplied since the military ousted Morsi on July 3, raising concerns in the West that it is no longer safe to visit Egypt’s pyramids, bazaars and beaches.

The economy is expected to grow by 2.6 percent in the fiscal year ending June 2014, according to a Reuters poll this month, well below the 3.5 percent the government expects to achieve.

In several years preceding the 2011 uprising against Mubarak, the economy grew at about 7 percent annually.

Attacks by militants in the Sinai have killed more than 100 members of the security forces since early July, the army spokesman said on Sept 15.

Security forces killed hundreds of pro-Morsi protesters in Cairo in August and then arrested many of the Brotherhood’s top leaders in an attempt to cripple the movement.

Though the Brotherhood, which renounced violence decades ago, has been weakened, Islamist groups which sympathize with it show no signs of giving up protests against Morsi’s ouster.

With Egypt’s oldest and best organized Islamist movement now effectively excluded from mainstream politics, the stage may be set for an Islamist insurgency to take hold beyond the Sinai, a stronghold for militants which is near the border with Israel.