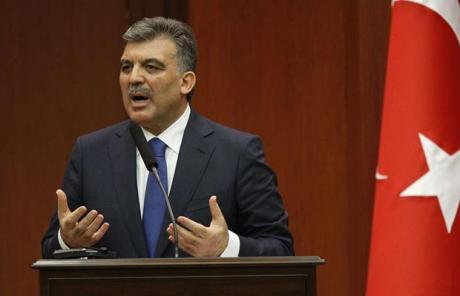 President Abdullah Gül warned the Muslim world last Friday of the possibility of facing the darkness of the Middle Ages as Europe once did if interest-based beliefs are combined with sectarian identity politics following the Arab Spring.

“Will a renaissance that enjoys peace and prosperity or a regional era of recession in which people will be subjected to new troubles as a result of regional rivalries start at the end of this process in the 21st century?” the president asked the audience while delivering the keynote speech at the fourth İstanbul Forum organized by the Center for Strategic Communication (STRATİM).

According to the Gül, no country, society or sect will benefit from such an era, as he called the intra-civilizational clash a “disaster scenario” which would be worse than a clash of civilizations.

Gül said there is no dilemma between Islam and democracy and a pluralist rule, in which all faiths and cultures can find space for themselves, appeals to everyone. However, he said, “In no country was there a transition to a pluralist democracy overnight,” as he added that a process to establish democracy in any given society is necessary.

President Gül also referred to his landmark speech at the ministers of foreign affairs meeting of the Organization for Islamic Cooperation (OIC) in 2003, well before the people’s movements in the Arab world were ignited, in which he called on the Arab world to put its house in order. “I had directed attention to the need for change in the region in my 2003 speech,” he noted.

The president also called for a political exit strategy in Syria to be initiated by the permanent members of the United Nations Security Council (UNSC) and Syria’s neighbors to end what he called a proxy war in Syria.

Gül said an earlier-planned Geneva II peace conference should convene with extensive preparations so as not to leave any room for diplomatic ambiguity as was the case with the first one. According to Gül, the first Geneva meeting failed because it faced tactical struggles without any sanctions or a timetable.

While criticizing the international community for its indifference in the face of the deaths and displacement of hundreds of thousands of people in Syria, Gül described the UNSC’s decision on Syria — which is aiming for a political solution in the country — as a positive development, noting that it should be supported by all. According to Gül, many international actors, including Turkey, agree that a new administration in Syria is necessary after all the bloodshed in the country.

Gül laid out a solution forcing the Syrian regime to obey the conditions of a transition process as the method to be pursued to end the civil war in the country. “What is critical here is for the international community to create a political environment that would reflect the will of the entire Syrian people,” the president added.

P5 consensus not enough for solution in Syria

According to Gül, although necessary, the consensus of the P5 (the five permanent members of the UNSC) is not sufficient to realize an exit strategy in Syria. “As I said in New York last week, there is a political process and including the countries which are indirectly involved in this issue is necessary,” Gül said, implying Iran without directly naming anyone.

In response to a question about reconciliation in Syria, Gül said this does not only involve the P5 countries and regional countries which have “strong structures” in Syria are also part of the issue. Gül also said he had mentioned the involvement of Iran and Russia in the Syrian problem before. Stating that he is making a realistic assessment of the case at hand, Gül said Russia’s position in Syria is not “surprising” after the crisis in Libya, referred to Russia’s resentment on the immediate launch of military action in Libya following the UNSC’s decision to give the green light for such an action.

Stating that the crisis in Syria is deepening and calling the situation there “shameful for humanity,” Gül reiterated his belief that the most reasonable way forward, as someone who once pioneered a similar process for Iraq, is to initiate a “Syria’s neighbors” process.

According to Gül, the UNSC, which adopted a resolution at the end of September that demanded the eradication of Syria’s chemical weapons but does not threaten automatic punitive action against Syrian President Bashar al-Assad’s government if it does not comply, has openly showed that the conflict in Syria poses a threat to international peace and security.

In the face of concerns over radicalism and extremism in Syria in the Western world, Gül said he has been stating from the very beginning that the lack of an immediate political solution to the problem in Syria would result in radicalism.

According to the president, the people in Syria are stuck in a dilemma between a Baathist regime and radical elements which would only prolong the stalemate.

Meanwhile, Prime Minister Erdoğan said during a TV program on Thursday that Syria is heading towards a sectarian war. Stating that he has received new intelligence on Thursday, Erdoğan said members of a “different sect” are ferried to Syria by planes to fight there. “These are warriors and are involved in the war in Syria. We are facing such a danger,” Erdoğan commented.

As far as Egypt is concerned, Gül said the responsibility of building the future of Egypt lies on the shoulders of all Egyptian people. “We want Egypt to return to democracy as soon as possible and accelerate its economic development before it exhausts its own energy,” the president said. According to him, it is not only the Arab world but also the whole region and the international community who will be hurt by instability in Egypt.

The Istanbul Forum, which hosts domestic and international foreign policy experts, journalists and academics, is expected to continue on Saturday as well.