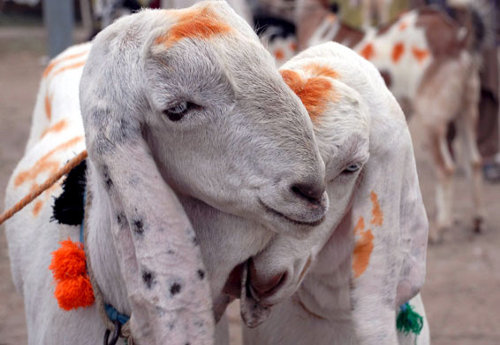 It is not their meat nor their blood that reaches Allâh, it is your piety that reaches Him. Indeed He has subjected them (animals) to you so that you may glorify Allah for guiding you, and give glad tidings {O Muhammed} to those who excel in good. (22:37)

1. Nabi Sallallahu Alaihi Wasallam is reported to have said: “For every hair that is on the sacrificial animal, one reward is recorded for the person making the Qurbâni.”

2. It is related from Hadrat Ayesha Radiallâhu anha that Nabi Sallallahu Alaihi Wasallam has said:“There is nothing dearer to Allâh during the days of Qurbâni than the sacrificing of animals. The sacrificed animal shall come on the Day of Qiyamah with its horns, hair and hooves (to be weighed in Thawâb). The sacrifice is accepted by Allâh before the blood reaches the ground. Therefore sacrifice with an open and happy heart.”