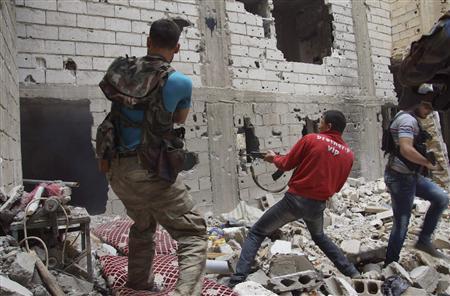 PanARMENIAN.Net – Syrian rebels including the al Qaeda-linked Nusra Front have counter-attacked east of Damascus to retake a town that served as a conduit for arms from Jordan into the capital before it was seized by government forces last month, rebel sources said, according to Reuters.

The rebels’ struggle to end four decades of Assad family rule has been complicated in part by internal divisions along ideological and political lines, as well as a shortage of heavy weaponry that could decisively turn the tide of conflict.

But in a rare move, brigades operating in Ghouta, a largely agricultural region on the eastern outskirts of Damascus, have united under one command to wrest back the town of Otaiba, two miles northeast of Damascus international airport.

“This is a huge target no brigade can deliver on its own, even al-Nusra cannot do it alone, so we all agreed to unite to retake it,” said a commander whose brigade is one of the 23 taking part in the battle. With God’s will this will be a decisive battle in rural Damascus that will stop the advance of the regime army and reopen the supply route.”

Brigades from the Western-backed rebel General Command and Islamist units joined forces over the weekend and pledged to share weapons and fighters. They took as their flag a white banner with the Muslim declaration of faith.

“We are fighting for the same goal and that is to topple Assad – so why shouldn’t we unite?” said a commander from an Islamist brigade involved in the battle.

Government forces have regained the initiative in the past few weeks, pushing rebels from areas close to central Damascus.