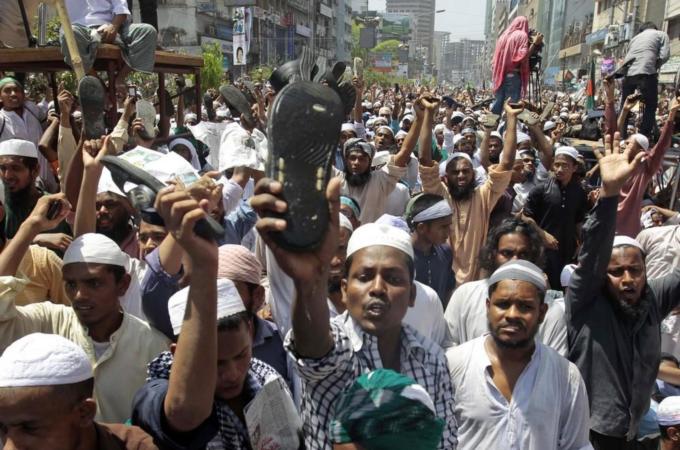 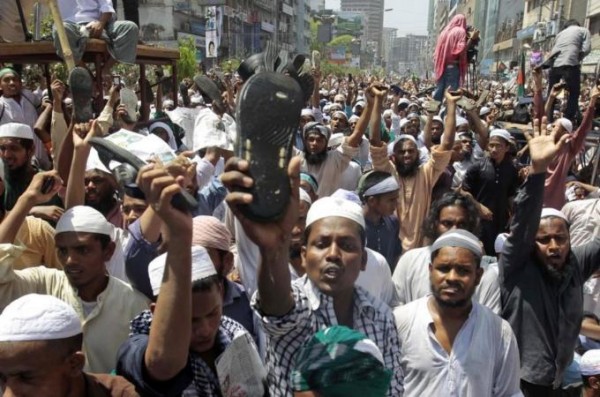 Dhaka, Bangladesh – Founded only a few years ago, Bangladesh’s Hefazaat-e-Islam [“Protectorate of Islam”] has recently been thrust onto the centre-stage of national politics by an extraordinary set of circumstances.

Unlike other outfits that operate here in the capital, Dhaka, the Hefazaat group is headquartered in the port city of Chittagong, where hundreds of madrassahs draw tens of thousands of young Muslims for schooling.

Many of these madrassahs teach only Islam, using Arabic as the medium of instruction.

The Hefazaat’s leaders and activists, who take strict views on religion, are almost wholly drawn from these schools.

Ahmad Shafi, the 93-year-old supreme leader of the Hefazaat, is also the chairman of the Bangladesh Qaumi Madrassah Education Board that oversees all such schools across the country.

Born in Rangunia in Chittagong district, Shafi was educated in two madrassahs before he went to Deoband in India for higher Islamic studies. He returned to teach at the Hat-hazari madrassah, where he had once studied, and later became its rector.

He describes the Hefazaat as not political, saying that its goals are “purely religious”.

He was present at a party rally in Dhaka on April 6 that drew nearly 200,000 people, but did not speak himself. Instead, his statement was read out by one of the younger leaders.

On May 5, he skipped another Hefazatarally in Dhaka completely.

Shafi’s goal is clear: he wants a Bangladesh run totally on Islamist precepts, and an end to the secularism that has long been one of the declared principles of the country.

The birth of Hefazaat was triggered by the 2009 Women Development Policy draft, which gave women equal rights by inheritance. In the face of fierce protests by groups such as Hifazat, the parliament later passed a watered-down draft just giving greater rights to women on acquired property.

Among the 13 demands put forth by the Hefazaat is a ban on the public mixing of the sexes.

“A ban on the public mixing of sexes and such other demands would put women back behind the veil,” Kazi Shahrin Huq, a journalist working in Dhaka, says.

Many of her female colleagues were attacked during Hefazaat’s April 6 rally.

Leading women’s rights groups have condemned the Hefazaat as “anti-women” and plan to organise a rally on May 9.

Others, such as Dhaka University Vice Chancellor AASM Arefin Siddique, say the group is anti-democratic.

“Hefazaat-e-Islam campaigning against democratic forces in the name of religion is acceptable in no way,” Siddique said.

“They’re trying to impose their own opinion on others.”

Hefazaat’s resurgence in recent months is, at least in part, a backlash against a campaign launched by youth activists and bloggers who are demanding capital punishment for alleged war criminals involved in Bangladesh’s 1971 war of independence against Pakistan. Tribunals set up to try alleged war criminals began in 2010 and are ongoing.

As part of the bloggers’ campaign, tens of thousands of Bangladeshi men and women began congregating at Dhaka’s Shahbagh Square , calling for a more secular society, and the death penalty for religious leaders and others allegedly involved in widespread killing and rape during the war.

Jamaat-e-Islami, Bangladesh’s largest religious-political outfit, has been in a tight spot since the war crimes trials began.

One verdict handed down by the tribunal said the organisation itself, and not just its leaders, was party to the crimes against humanity committed during the 1971 war.

Jamaat controls only two seats in Bangladesh’s 300-member parliament. With a ban on the party a real possibility, some suspect Hefazaat’s rise came about because Jamaat needed another outlet to do its bidding.

“The Jamaat was on the defensive, its leaders in docks for war crimes and for supporting Pakistan,” says a spokesperson for the Shahbagh Square movement.

“A new Islamist force was needed and up came the Hefazaat.”

The Shahbagh activists have alleged that Hefazaat has been financed by Jamaat.

“They are out there to save the Jamaat-e-Islami, to thwart the war crimes trials, to push the same fundamentalist agenda,” says the spokesperson.

Last week, the left-wing minister, who was also a guerrilla leader during the war, was scathing in his description of Hefazaat: “It is a fundamentalist force, it is anti-democratic, it is anti-women. It is against everything Bangladesh stands for.”

Shafi belongs to a band of Islamists that did not always toe the Jamaat line during Bangladesh’s liberation war.

Many in the Deobandi school of thought backed a united India and rejected the partition that created Pakistan in 1947.

Their fraternity with Jamaat therefore baffles many historians.

But Prime Minister Sheikh Hasina Wajed and opposition leader Khaleda Zia both appear to be cosying up to Shafi and trying to cultivate the Hefazaat.

Sheikh Hasina, who allowed a team of pro-Hefazaat officials to see her at her home before the group’s April 6 rally, says her government has already met some of the group’s 13 demands.

Police arrested four bloggers whom the Hefazaat described as “atheists”, and there is now a home ministry committee that scans remarks considered to be anti-Islamic. Hasina, predictaly, has drawn a lot of flak from secular groups.

Zia and the 18-party alliance she heads supported the Hefazaat’s Dhaka blockade on Sunday, which led to considerable violence in the capital and the town of Narayanganj.

Two policemen and a border guard were among the 14 people so far acknowledged as having died during the violence.

Shafi’s son-in-law is head of Islami Okyo Jote (IOJ), which is part of the Zia’s opposition alliance. Shafi himself uses the IOJ headquarters in Old Dhaka.

In his latest public speech, in the northern city of Bogra on April 29, Shafi sought to deliver a no-nonsense message: “Anyone wishing to retain or regain power must meet the 13 demands.” And to Sheikh Hasina, he was even more specific: “You must leave the company of the atheists.”