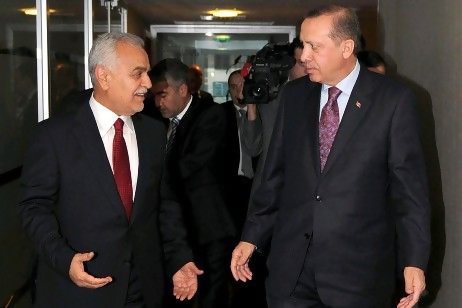 The Turkish-Qatari axis played a critical role in the escalating conflict leading to a state of civil war in Syria. Today the same axis is influencing internal forces in Iraq with the aim of establishing a new Free Army and starting an internal conflict. What Turkey has not fully understood is the special peculiarities in the composition of Iraqi society which are completely different from those of Syria. In Syria the Arab Sunni Muslims represents around 65% of the total population, while the rest of the population are Allawites, Shi’a Muslims, Orthodox Christians, Christian  Armenians, Circassians, Sunni Kurds, and Druze. The composition of Iraqi society is the opposite. The majority of Iraqi society is composed of Shi’a Muslims, while the Sunni are a minority, as are the Kurds.

The state of Iraq is represented by 18 counties (governorates) and the Sunnis are the majority in only three of these 18 counties – as well as the Kurds – mostly Sunni Kurds with Shi’a Kurds living to the North East of Iraq. So the middle of Iraq as well as the south is mainly composed of Shi’a, while the west of Iraq is inhabited by its Sunni population, and the North of Iraq is Kurdish. In addition to these main sects, other indigenous ethnic minorities have also existed in Iraq since its beginnings as a state.

The picture gets further complicated as we examine the countries that surround Iraq. Iraq is surrounded by Turkey to the North, Iran to the East, Syria and Jordan to the West, and Saudi Arabia and Kuwait to the South.

The interference of the Turkish-Qatari axis in the internal affairs of Iraq may have hugely far-reaching consequences. First the pillar that this Axis rests on is the Arab Sunni sect. This sect lost control of Iraq as a result of the overthrow of Saddam Hussein’s regime. The political horizon of this sect is still limited to a return to the past. This is the root of a great dilemma as the ‘politicians’ representing this sect cannot live with the present as presently constituted. All their efforts and actions are directed towards gaining back their lost authority. This tendency prevailing within this sect receives unlimited support from neighbouring Sunni countries. Turkey has made its support to the Iraqi Sunni minority no secret as Turkey’s Prime Minister issues, from time to time, clear statements supporting the Sunnis, beside his open attacks on the Shi’a-dominated Government of Iraq.

What are the options open to the Iraqi Shi’s majority as they face serious confrontation from the Sunni minority backed by the Turkish-Qatari axis?

The answer will depend on the nature of these threats. If these confrontations escalate and represent a permanent threat, then the option of dividing Iraq will become a reality, since the three main social components of Iraq would no longer be able to co-exist. The establishment of a Kurdish State in the North of Iraq will have further knock-on effects in relation to Turkey. If this ever happens then the Kurds in Turkey will have enough reason to declare their independence and merge with the Kurds in the North of Iraq. Such a development will push Turkey towards an attempt to annex the North of Iraq and put an end to the Kurdish rebellion.

The three governorates in the west of Iraq could establish an independent Sunni State. But what are the options lying before such a Sunni state? If the civil war in Syria leads to the establishment of an Islamic state run by the Muslim Brotherhood, then the Sunni state in the west of Iraq has the opportunity to merge with a newly-established Syrian Islamic state. The other alternative is to merge with Jordan. Otherwise, it is hard to see how the Sunnis in Iraq could establish an economically viable state.

The future of the Shi’a majority

But by far the most controversial of these futures is that relating to Iraq’s Shi’a majority. The establishment of a Shi’a state in the middle and south of Iraq will lead to significant and far-reaching geopolitical consequences. For this state will possesses one of the largest oil reserves in the world. And at the same time it is located next to another Shi’a state – that is Iran.

Any newly-established Shi’a state will have the following options. It is economically viable and can stay independent. This option will be the most likely scenario, especially if this state is not confronted by Sunni threats and conspiracies. Practically, and taking into consideration the prevailing regional axes and Turkish/Arab Sunni ambitions, the most logical conclusion would be a merger between a newly-established Shi’a state in Iraq and Iran. Although this conclusion is the opposite of what Turkey desires, it is the most logical conclusion given the continuous confrontations and conspiracies that have been and are being directed at the Shi’a in Iraq.

Such a scenario will turn Iran into a regional superpower controlling huge oil and gas reserves and moving very close to Israel. This development will create the need for entirely new balance of power calculations.

But, whether the Shi’a in Iraq will remain independent, or merge with Iran, a simple calculation can show that Iran under both scenarios is the real winner. This is basically the most important unintended consequence of Turkish sectarian involvement in Iraq.