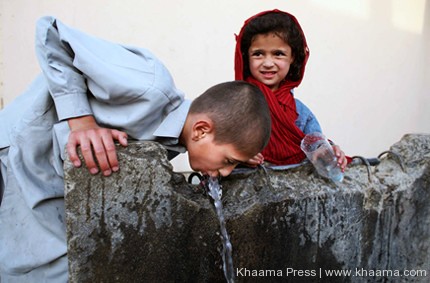 According to available figures, about 73 percent of
people in Afghanistan lack access to clean drinking water and 95
percent do not have access to sufficient sanitation. As a result,
diarrhoeal diseases are responsible for the death of 48,545
children every year in the country.

Lack of access to clean
drinking water and sanitation is a chronic problem not only in
rural areas, but also in most of the Afghan cities which are
developing — unplanned — at a rapid rate.

Even in the Afghan
capital, Kabul, barely 25 percent of people, according to some
reports, have direct access to potable water.

The overall majority of
people in Afghanistan do not have access to running water, they
fetch water from open sources such as rivers, springs, streams,
ponds and wells.

The water taken from the open sources is
usually contaminated and its use usually leads to wide-spread
water-born diseases. Afghanistan has 2,775 cubic meters surface
water per capita per year. Experts believe that 1,700 cubic meters
of water per capita per year is sufficient to satisfy the water
needs of the country for domestic use, food production, industrial
use, and uses for energy and the environment. However, Afghanistan
lacks the capacity to properly utilize, manage and distribute the
water to meet the water demands of its citizens. It’s not
just the water There is only one
health worker per 7,000 Afghans, according to the United
National Consolidated Appeal 2012, and one female health
worker per 23,000 Afghan females. The Consolidated Appeal also
reports that the number of teachers in schools remains well below
international standards, with one teacher per 101 students, and one
female teacher for every 344 female students. The results of
the Afghanistan Mortality Survey Report
2010 indicate that nearly 57.4 percent of the
population in Afghanistan live within one hour’s walking distance
from a public health facility. Therefore, limited access to medical
facilities and the absence of knowledge, skills and the ability to
effectively manage diarrhoeal diseases usually leads to the death
of 133 children per day. The government of Afghanistan has
reaffirmed its commitment to reaching the Millennium Development
Goals (MDG), including increasing access to safe drinking water
from 27 to 50 percent and to proper sanitation from five to 50
percent by 2014. By 2020, they aim to increase access to both by
100 percent. However, experts believe that the informal development
of cities, lack of central sewage systems, large levels of
migration from rural to urban areas, political and social
instabilities, natural disasters, continuous droughts in most parts
of the country, and lack of an effective coordination between
government institutions and national and international
organisations will make it impossible for the government of
Afghanistan to reach the MDG in safe drinking water and sanitation
by 2020. Consumer Rights and Services Organization (CRSO), which is
an independent non-governmental organization and promotes consumers
rights protection in Afghanistan, calls on the government of
Afghanistan and international organisations to seriously work for
the development and implementation of an integrated health policy,
intersectoral collaboration and communities’ inclusion to
effectively address and overcome health problems, including
diarrhoeal diseases, and ensure access to clean drinking water and
enough sanitation. Access to clean drinking water and enough
sanitation is the basic right of every Afghan citizen; therefore,
the government of Afghanistan should take the lead in ensuring that
the rights of its citizens are met.