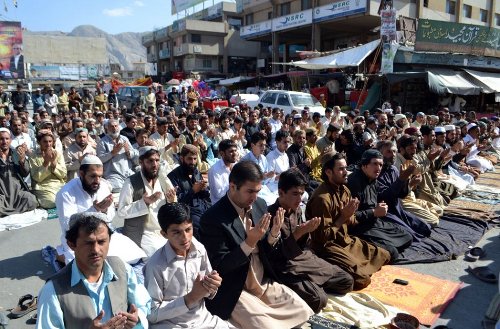 Pakistani police have arrested several suspects in the shooting of a 14-year-old girl internationally recognized for documenting atrocities committed by the Taliban.

Officials say the arrests took place in the northwestern Swat Valley, where Malala Yousafzai was shot in the head and neck Tuesday by Taliban gunmen as she left school.

Few other details were released on the arrests.

Earlier Friday, a Pakistani military spokesman said Yousafzai is in “satisfactory” condition. Major General Asim Saleem Bajwa said the next few days will be critical in the recovery of Yousafzai, who remains unconscious and on a ventilator.

A Taliban spokesman in the Swat Valley said Friday the group’s leaders decided a few months ago to kill Yousafzai, and assigned gunmen to carry it out.

Pakistanis at mosques across the country prayed Friday for Yousafzai’s recovery.

Yousafzai is being treated at the Armed Forces Institute of Cardiology, Pakistan’s top military hospital in Rawalpindi. Doctors say she has a 70 percent chance of surviving.

The Taliban says she was “pro-West,” and that she denounced the militant group and called U.S. President Barack Obama her idol.

Yousafzai is renowned for documenting Taliban atrocities in the area near her home in Swat Valley, and for promoting education for women. She wrote under a pseudonym – Gul Makai – in a blog published by the BBC.

In her blog, Yousufzai described life under the Taliban in 2008 and 2009, when militants carried out beheadings and other violence in the territory they controlled, large areas of the Swat Valley in Khyber Pakhtunkhwa Province.

In Geneva Friday, a group of U.N. experts urged Pakistan’s government to ensure that school children, particularly girls, are protected in the country, and that extremist groups do not prevent Pakistanis from realizing their human rights.

The experts said trying to assassinate a 14-year-old girl who is supporting the rights of girls to receive an education is a “shocking” attack on human rights defenders in Pakistan.