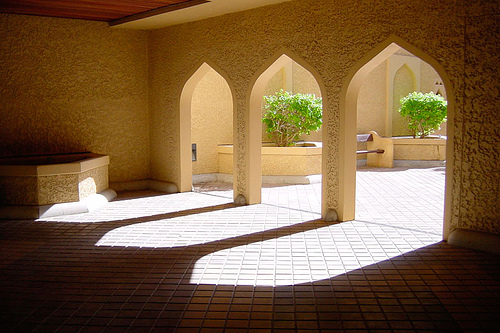 (May the peace and blessings of Allah be upon him, his family, and companions)

WHEN the Mosque was nearly finished the Prophet (peace and blessings of Allah be upon him) gave orders for two small dwellings to be attached to its eastern wall, one for his wife Sawdah and the other for his betrothed, ‘A’ishah. The building had taken altogether seven months, and during that time he lodged with Abu Ayyub. But when Sawdah’s house was nearly ready he sent Zayd to bring her to Medina, and with her, Umm Kulthum and Fatimah; and Abu Bakr sent word to his son ‘Abd Allah to bring Umm Ruman, Asma’ and ‘A’ishah. At the same time Zayd brought his own wife Umm Ayman and their small son Usamah. Talhah also travelled with them, having disposed of all his immovable property, and making now his Hijrah. Not long after the arrival of the party, Abu Bakr gave Asma’ in marriage to Zubayr, who with his mother Safiyyah had already been some months in Medina. Abu Bakr’s sister Quraybah remained in Mecca to take care of their father, Abu Quhafah, who was old and blind. Unlike Quraybah, he had not yet entered Islam.

The Prophet now decided that in addition to Umm Ayman Zayd should have a second wife, one nearer his own age, and he asked his cousin ‘Abd Allah, the son of Jahsh, for the hand of his beautiful sister Zaynab. At first Zaynab was unwilling, and she had reason to be so, as events were to disclose. The reason she gave, namely that she was a woman of Quraysh, was not convincing. Her mother, Umaymah, of pure Quraysh stock on both sides, had married a man of Asad; and quite apart from Zayd’s adoption into Quraysh, it could not be said that the tribes of his parents, the Bani Kalb and the Bani Tayy, were inferior to the Bani Asad. When she, saw that it was the Prophet’s desire that she should marry Zayd, she consented, and the marriage took place. About the same time her sister Hamnah was given in marriage to Mus’ab. Not long afterwards Umaymah came to Medina and pledged allegiance to the Prophet.

The Prophet and his daughters now went to live with Sawdah in her new, house; and after a month or two it was decided that ‘A’ishah’s wedding should take place. She was then only nine years old, a child of remarkable beauty, as might have been expected from her parentage. Quraysh had given her father the name of ‘Atiq, and some said that this was on account of his fine face. Of her mother the Prophet: had said: “Whoso would behold a woman of the wide-eyed Huris of Paradise, let him look on Umm Ruman.” To ‘A’ishah the Prophet had long been very near and very dear, and she had been accustomed to see him every day, except during those few months when he and her father had already emigrated and she and her mother were still in Mecca. From her earliest years she had seen her father and mother treat him with such love and reverence as they gave to no one else. Nor had they failed to impress upon her the reasons for this: she knew well that he was the Messenger of God, that he had regular converse with the Angel Gabriel, and that he was unique amongst living men in that he had ascended to Heaven and returned from thence to earth. His very presence told of that ascent, and communicated something of the joy of Paradise. In his miraculous touch this joy was even tangible. When others were overcome by the heat, his hand would be “cooler than snow and more fragrant than musk”. He seemed, moreover, ageless, like an immortal. His eyes had lost nothing of their lustre, his black hair and beard had still the sheen of youth and his body had the grace of a man whose age was only the half of those fifty-three years which had passed since the Year of the Elephant.

Small preparations were made for the wedding – not enough, at any rate for ‘A’ishah to have had the sense of a great and solemn occasion, and shortly before they were due to leave the house she had slipped out into the courtyard to play with a passing friend. In her own words: “I was playing on a see-saw… They came and took me from my play and made me ready.”

Abu Bakr had bought some fine red-striped cloth from Bahrain and it had been made into a wedding-dress for her. In this they now clothed her. Then her mother took her to the newly built house where some women of the Helpers (natives of the city of Madina) were waiting for her outside the door. They greeted her with the words “For good and for happiness – may all be well!” and led her into the presence of the Prophet. He stood there smiling while they combed her hair and decked her with ornaments. Unlike his other marriages, at this there was no wedding feast. The occasion was as simple as possible. A bowl of milk was brought and having drunk from it himself, he offered it to her. She shyly declined it, but when he pressed her to drink she did so, and offered the bowl to her sister Asma’ who was sitting beside her. Others also drank of it; then they all went their ways, and the bridegroom and bride were left together.

For the last three years scarcely a day had passed without one or more of ‘A’ishah’s friends coming to play with her in the courtyard adjoining her father’s house. Her removal to the Prophet’s house changed nothing in this respect. Friends now came every day to visit her in her own apartment – new friends made since her arrival in Medina and also some of the old ones whose parents, like hers, had emigrated. “I would be playing with my dolls,” she said, “with the girls who were my friends, and the Prophet would come in and they would steal out of the house and he would go out after them and bring them back, for he was pleased for my sake to have them there.’ Sometimes he would say “Stay where ye are”‘ before they had time to move. He would also join in their games sometimes, for he loved children and had often played with his own daughters. The dolls or puppets had many different roles. “One day,” said ‘A’ishah, “the Prophet came in when I was playing with the dolls and he said: ‘0 ‘A’ishah, whatever game is this?’ I said: ‘It is Solomon’s horses’, and he laughed.” But sometimes as he came in he would simply screen himself with his cloak so as not to disturb them.

‘A’ishah’s life had also its more serious side. Yathrib (Madina) was well known throughout Arabia as a place where at certain seasons there was a great danger of fever, especially for those who were not native to the oasis. The Prophet himself escaped the fever, but it severely attacked many of his Companions including Abu Bakr and his two freedmen ‘Amir and Bilal, who were at that time living with him. One morning A’ishah went to visit her father, and was dismayed to find the three men lying prostrate in an extremity of weakness. “How dost thou, my father?” she said, but he was too ill to adjust his reply to a girl of nine, and he answered her with two lines of poetry:

“Each man each morn his kindred greet good day,
And death is nearer than his sandal’s thong.”

She thought he did not know what he was saying and turned to ‘Amir, who also answered her in verse, to the effect that without actually dying he had been near enough to death to know what it was like. Meantime the fever had left Bilal, though he was still too weak to do anything but lie in the courtyard of the house. But his voice had enough strength in it for him to chant:

“Ah, shall I ever sleep the night again
Midst thyme and nard that outside Mecca grow,
And shall I drink the waters of Majannah (a place near Mecca), And see before me Shamah and Tafil (two hills in Mecca)?”

‘A’ishah returned home deeply troubled. “They are raving,” she said, “out of their minds, through the heat of the fever.” But the Prophet was somewhat reassured when with the retentive memory of a child she repeated almost word for word the lines which they had uttered and which she had not fully understood. It was on that occasion that he prayed: “O God, make Medina as dear unto us as thou hast made Mecca, or even dearer. And bless for us its waters and its grain, and carry away from it its fever as far as Mahya’ah, (a place some distance from Madina)” And God answered his prayer.