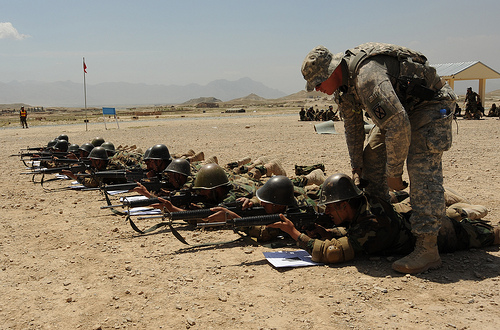 For Pentagon Chief Leon Panetta, a recent wave of “green-on-blue” (or insider attacks) on US and NATO troops – ie the Afghan version of friendly fire – are just the “last gasp” of a bunch of frustrated Taliban.

That does remind one of Don Rumsfeld’s “remnants” of Saddam’s regime, who duly morphed into hardcore Sunni Iraqi guerrillas and gave hell to the US occupation.

Back to reality, even US Chairman of the Joint Chiefs of Staff General Martin Dempsey had to admit, “something has to change”. Only in 2012, Afghan security forces killed 51 NATO soldiers – and counting.

That may not be much compared to scores of civilian victims, aka “collateral damage”, of the shadowy CIA drone war against the Pakistani tribal areas. Not to mention the recent US raid that killed eight Afghan women and girls who were engaged in an extremely subversive plot to collect firewood.

Anyway, something did change. NATO’s new spin on “green-on-blue” is right up the scale down alley. From now on, joint patrols or any “interaction” with Afghans will only go on at least at battalion level (which group 500 or even 800 members).

It was – surprise! – a unilateral Pentagon decision. No NATO partners or even the Afghans themselves were consulted.

So here’s the instant spinless translation – if any was needed.

That’s the abject failure of all elaborate Western plans to set up an Afghan fighting force by embedding them with Americans and Europeans – and then have them handle security by themselves. Even as it stands, very few Afghan units can independently engage in tactical operations.

That’s the solemn erection of a far from figurative Wall of Mistrust between “us” and “them”.

That’s the end of a massive PR campaign – sold to Western public opinion – that even boasted its own Dari slogan; shohna ba shohna (“shoulder by shoulder”), as in “good” Westerners side by side with Afghans fighting the “evil” Taliban.

Moreover, what this implies is there’s no soft exit strategy for the US and NATO. Sooner rather than later – in this case December 2014 – a Saigon moment looms in the Hindu Kush.

Take the rifle and run

Predictably, tough guy NATO Secretary-General Anders Fogh Rasmussen said the deadline towards total Afghan responsibility for national security by the end of 2014 remains; the scaling down is “prudent and temporary”.

In terms of losing face, Rasmussen and NATO could not possibly accept ignominious defeat and rush for the exits. Especially after Taliban supremo Mullah Omar had stated over a month ago that the Taliban “cleverly infiltrated the ranks of the enemy according to the plan given to them last year”.

Even without rampant Taliban infiltration, NATO would have never been able to vet all 352,000 members of Afghanistan’s army and police forces anyway. Most are Tajiks, some are Hazaras and Uzbeks, but there are Pashtuns as well, who may or may not be Taliban sympathisers, and are simply enlisting because they can earn a steady paycheque.

As for the Afghan police, it is widely despised as a bunch only good enough to set up roadblocks, search vehicles and extort cash.

The 11-year-old Afghan war is now virtually invisible in the US, even during a drawdown of 33,000 US troops ordered by President Obama by the end of the month (still 68,000 will remain). A majority of Americans want the war over by… yesterday – as in proclaim victory, cut our losses, and leave.

Now, with the new NATO dispensation, it’s fair to assume most of the 150,000 Western troops – and fat cat contractors – will get out of Dodge by the end of next year.

As for the Pentagon’s obsession in keeping Special Forces on the ground until at least 2024 – as a useful tool in monitoring both Russia and China – it depends on a Status of Force Agreement (SOFA) that the Pentagon must convince Hamid Karzai’s government to sign.

Ten years ago, in Paris, I asked Hamid Karzai in person how could an Afghan army be configured with a sectarian bent – mostly Tajiks and not including the Pashtun majority. He cut me off – insisting it would be a success. Now Mullah Omar has answered my question.

After robbing the country blind for over a decade, along with his deceased brother Ahmed Wali, the most probable outcome is that Karzai has already booked his Saigon-style helicopter exit from a roof in Bagram base.

Or he might pull a Nouri al-Maliki in Iraq, not sign the SOFA, and thus pack the US and NATO bags home for good. As Karzai is no more than a US puppet, that’s unlikely.

In Iraq – as part of a Machiavellian plan devised by Iranian Quds Force commander Qassem Suleimani – Maliki had the Pentagon believe it would enjoy a SOFA similar to South Korea’s. But then, at the eleventh hour, Maliki added a clause to the treaty; US troops/contractors would have to abide by Iraqi law. The deal collapsed.

Without a SOFA, there’s also the question of what to do with all the hardware. The US alone holds at least 100,000 containers in Afghanistan. A lot of the hardware will be sold – or “donated” – to allies. That unimpeachable democrat, Uzbekistan’s dictator Islam Karimov, for instance, would love to lay his hands on most of the loot for his military.

Meet me at the graveyard

When Washington cannot even trust the “natives” it is leaving behind to cover the exit – and that’s not even counting the extended families of the women and children who became “collateral damage” to US/NATO air strikes – all conditions are in place for a Saigon remix.

Until recently the debate was whether the Taliban would agree not to attack US/NATO troops if a deadline for a total retreat was set in stone. Now the Taliban don’t even need an agreement.

As historical ironies go, few beat Russia moving into the US/NATO vacuum – light years after the USSR retreated from Afghanistan along that fateful bridge over the Amu Darya river in February 1989.

Afghanistan won’t be back to a murderous civil war as in the first part of the 1990s – before Islamabad unleashed its secret weapon, the Taliban. This time, the most probable outcome is a partition of the country between the Taliban and local warlords, with Pakistan, Iran, India and Russia positioning themselves as the ultimate arbiters.

There will always remain the dodgy angle of the West’s latest Afghan adventure being all about heroin – which implies private banking’s humongous money laundering profits. Talk about a bulky Western army providing security for global drug lords. Precedents abound – as in the Opium Wars.

But whatever angle is examined, the fact is the overwhelming majority of Afghans – no matter their ethnicity – just want the foreign invaders to leave. Their hearts and minds were never conquered in the first place; after all, the invaders have not even managed to speak Pashto or Dari.

“A war begun for no wise purpose, carried on with a strange mixture of rashness and timidity, brought to a close after suffering and disaster, without much glory attached either to the government which directed, or the great body of troops which waged it. Not one benefit, political or military, was acquired with this war. Our eventual evacuation of the country resembled the retreat of an army defeated.”

Talk about the graveyard of empires.