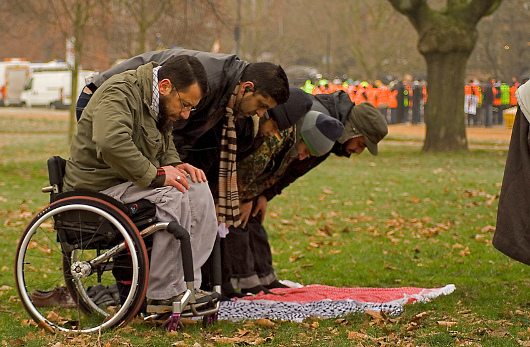 MANAMA, Bahrain—Scores of people in Bahrain have converted to Islam this year. Twenty-two people from all walks of life have already gone through the process and others have also declared their intention to take the life-changing step, according to Discover Islam.

“We receive people from various countries and backgrounds who have several questions about Islam and Muslims,” said a Discover Islam spokesman.

“We have been bombarded with calls and e-mails from non-Muslims, who are willing to convert, but are afraid to announce it to their families.

By the grace of Allah, hundreds of people have reverted in the last few years, and we are confident many more will come forward.”

This year’s converts celebrated Eid after successfully negotiating their first Ramadan—despite concern among a few friends and family members about the path they have chosen.

The 42-year-old who converted last week says she “is proud to have chosen the right religion after carefully researching the decision.”

“I am happy about the path I chose for myself, and I am ready to die now as I have selected the right religion,” said the Al Azouzi Trading and Contracting company saleswoman.

“I was impressed when I saw Muslim women praying, wearing hijab and covering their body.

My friend, who is also a convert, gave me books on Islam and invited me to attend events organized by Discover Islam.

I read the Koran and other books, and realized this was my new way of life.”

Indian student Shaan Lopez Singh—now called Abdul Malik—converted to Islam after being inspired by a lecture given by renowned orator Dr. Zakir Naik in March.

“I was born into a family with mixed faiths, my mother is a Christian, while my father follows the teachings of Hinduism,” said the Global Institute for Management Science O-level student.

“Earlier, I followed both religions—Hinduism and Christianity. I was born in Bahrain but went back to India and just recently returned to the island.

“All my life, I researched on various religions and faiths, trying to find the right one for myself.”

The 21-year-old says he feels more blessed and is happier since he took the life-changing decision, despite his father refusing to talk to him.

“Converting to Islam made me lose all my fears and become a better man,” he told the Gulf Daily News.

“Earlier my views about Islam and Muslims were influenced by fictional portrayals, but now after conversion, I believe deeply in the religion.”

Damas worker Anirudh Dhanak converted to Islam in the presence of Dr. Naik during his visit to Bahrain in March.

“I feel comfortable now after accepting Islam as the religion and Dr. Naik was my source of inspiration,” said the 27-year-old Indian.

“My mother and younger brother were initially shocked, but they seem to have accepted my decision.

My mother was aware of my inclination as I used to ask her and other relatives several questions about Islam and Muslims.

And being in Bahrain for six years, I developed an insight into the religion. I learned how to practice it with the help of Discover Islam volunteers.

I am happy and would like to thank them for all their support and help,” Dhanak said.

Kenyan Silas Nyakundi says his journey toward Islam was fraught with challenges and his wife was unaware of his decision.

“I converted to Islam two months ago,” said the 33-year-old.

“The only person who has any clue about my conversion is my elder sister, who lives in the United States.

Some days ago when she fell sick, I told her that I would pray for her in a mosque. But she never believed it.

I am a totally changed person now and have no words to express the feelings in me.”

The Muharraq Health Centre security officer, who is now called Omar, said his admiration for the way Muslims practice their faith persuaded him to convert to Islam.

He now hopes to persuade his wife, a Christian, to follow in his footsteps.

“Honestly, I didn’t tell my wife that I have converted to Islam, but I am sure I will be able to convince her,” he said.

Italian Giada Ciresola embraced Islam in the beginning of this year after reading books about the religion.

“When my husband approached me for a relationship, I accepted, although I knew he was a Muslim,” she said.

“We got married a year ago, and that’s when I started discovering his religion.

I was not a devout Christian and there was something inside me that urged me to learn more about Islam.

In the beginning I wasn’t really interested in Islam but gradually developed a liking for it.

I was inspired after watching my husband pray five times a day, practicing the religion with great devotion. That’s when I took the big decision.”

Mrs. Ciresola said the decision had been a positive force in her life.

“Everything has changed and I would like to thank the people who supported me,” she said.

“After I decided to revert, I saw a dream in which I was wearing an abaya and hijab and I was surprised.

The next morning, I went to Discover Islam and converted to Islam.

My mother is happy as she knows my husband well. But my father is stubborn and is angry with me, while my younger sister is also showing interest in Islam.”

Filipino Mildred Borja—now known as Majidah—has also embraced Islam, despite the fact that it has lead to her divorce.

“I was brought up as a Catholic and got married to a Catholic in the Philippines a year ago. However, I didn’t feel comfortable,” said the 32-year-old.

My heart was with all my Muslim friends and when I came back to Bahrain, my sponsor spoke to me and gave me Islamic literature to read.

I had so many questions and when I read these books, I found all the answers.”

“I am grateful to my sponsor who took me to Discover Islam when I informed him about my decision to convert,” she said.

“I have started wearing abaya and hijab and I feel comfortable as people seem to respect me more today.

I have separated from my husband as he didn’t accept me as a Muslim.

I would advise others to read about Islam as it teaches us so much about life and religion.”