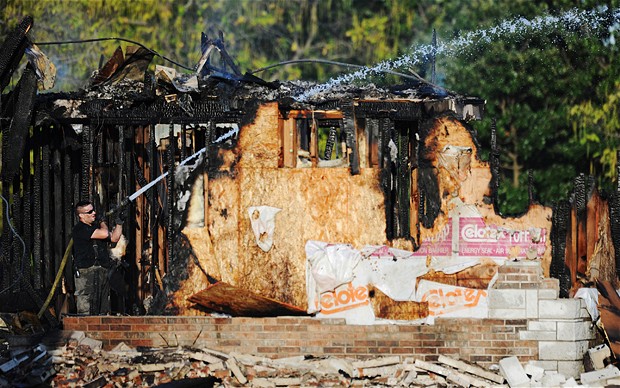 A firefighter works to extinguish the smoldering remains of the Islamic Center in Joplin, Missouri. Photo: AP

An Islamic community center in Joplin, Missouri burned to the ground early Monday morning. It was the second fire the center had faced in about a month.

It follows a July 4 arson at the Islamic Society of Joplin that caused only minor damage, but sparked an FBI investigation – and a $15,000 reward for tips leading to charges relating to the blaze.

The fire that destroyed the mosque and community center was reported at about 3:30 am local time Monday, the Jasper County Sheriff’s Office said.

The center’s imam was in the building until late Sunday night, and told Yahoo! News that he was “sad and shocked” about the fire that destroyed his place of work and worship.

“Nothing can be saved,” Imam Lahmuddin said Monday. “But since we are people of faith, we just can remember that this is a thing that happened because God let it happen, and we have to be patient, particularly in the month of Ramadan, control our emotions, our anger.”

No injuries were reported in the fire, and no charges have been filed. The FBI has opened an investigation, and will try to determine whether it was caused by arson, according to bureau spokeswoman Bridgett Patton.

The FBI had also investigated a 2008 incident in which the center’s sign was set on fire. As with the July arson, that investigation also hit a dead end. And though last month’s failed attempt to burn the building down was caught on camera, a spokesperson for the sheriff’s office said the center’s security cameras were destroyed in the Monday fire.

Meanwhile, the Council on American­ Islamic Relations is calling for increased police protection at houses of worship across the country following the Joplin fire and the deadly attack on a Sikh temple in Wisconsin the day before. The Washington-based advocacy group has also put up $10,000 for information leading to the arrest and conviction of whoever set the Joplin fire.

The Islamic Society of Joplin opened in 2007 as a mosque and community center, and boasts a membership of about 50 families. According to Lahmuddin, the center’s members are integral members of the Joplin community, many of them working as doctors at local hospitals.

On Sunday, a Sikh temple in a suburb of Milwaukee, Wisconsin came under siege when a gunman opened fire in the parking lot, then took hostages once inside the building. Some reports speculate that alleged neo-Nazi Wade Michael Page, the gunman in the Wisconsin attack, had confused the Sikhs for Muslims.

“I heard that yesterday, and this morning we see this happen in our place,” Imam Lahmuddin said. “We are more fortunate that no one here got hurt.”