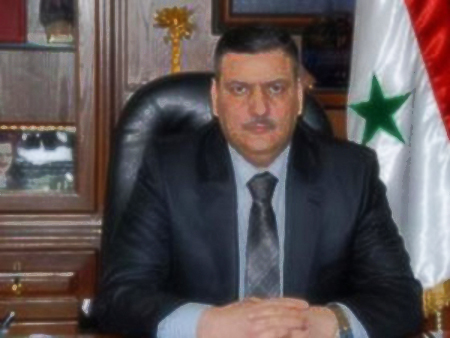 “I announce today my defection from the killing and terrorist regime and I announce that I have joined the ranks of the freedom and dignity revolution,” Hijab said in a statement read in his name on Al Jazeera television.

A spokesman, Mohammed Otri, later told journalists that Hijab had been planning his defection for a long time. He said the defection did not occur on the spur of the moment, but that it had been planned for several months in coordination with the rebel Free Syrian Army.
Opposition activists say Hijab and his family were smuggled out of Syria by rebel fighters.

Syrian state media said Hijab had been “relieved of his duties” and that his deputy, Omar Ghalawanji, was replacing him in a “caretaker” capacity.

Hilal Khashan, who teaches political science at the American University of Beirut, said the high-level defection shows that Assad’s regime is crumbling.

“[Hijab] was just appointed by the president,” he said. “This means that the president can no longer trust anybody around him, especially Sunnis. This means that he will have difficulty finding somebody to work under his umbrella. The Syrian leadership is disintegrating from within.”

As the fighting continued in Syria’s largest city of Aleppo for an 18th day, videos posted on the Internet showed people trying to pull victims from the rubble of buildings allegedly bombed by government warplanes.

Witnesses say a number of buildings in Aleppo’s Sakhour district were leveled.

The opposition Syrian Observatory for Human Rights says the army is shelling several neighborhoods in Aleppo and that nationwide nearly 30 civilians had been killed.

Earlier Monday, an explosion tore through the third floor offices of Syrian state TV in Damascus, causing a number of casualties. The station broadcast video of employees running through smoke-filled corridors as wires and ceiling tiles dangled in the air.

Government and opposition claims in Syria are difficult to verify because journalists do not have a freedom of movement.

Aleppo, the country’s biggest city, has become a key battleground in the nearly year and a half uprising against Assad’s rule.

The Syrian Observatory for Human Rights reported that more than 40 Syrians, including 25 civilians, were confirmed as killed Sunday across the country. The British-based group said more than 24 others were killed a day earlier.

Iran says the victims were religious pilgrims, but a brigade commander with the Free Syrian Army describes them as elite Iranian Revolutionary Guards.

Iran backs the Syrian government, while Turkey and Qatar support the Syrian opposition.

Former Iranian President Abolhasan Bani Sadr told VOA that the captured Iranians were not armed or wearing Revolutionary Guard uniforms. He said Iran is definitely helping Assad and that the stakes are very high for his country.

He said the fall of the Assad government not only would be a heavy blow to Iranian prestige and influence in the region, but it also would reinforce U.S. policy of containing Iran. He said Tehran views any toppling of Assad as signifying that Iran’s turn could be next.

In a joint opinion piece published late Sunday by The Washington Post, they say the U.S. is jeopardizing its national security, as well as its moral standing in the world, by remaining on the sidelines.

The senators said inaction would haunt the nation “for years to come.”