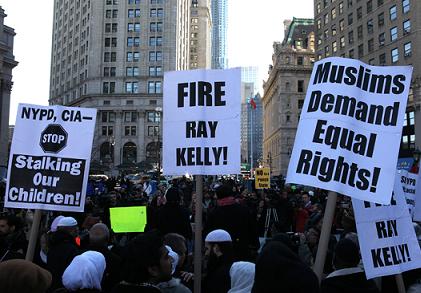 An investigation has found further proof that the New York Police Department (NYPD) has been spying on citizens just based on their religion, Islam, and without any apparent evidence of criminal activity.

Back in August, The Associated Press first revealed that the NYPD, with the help of the CIA, developed one of the biggest domestic intelligence agencies in the country.

It targetted US citizens based solely on their religion or ethnicity.

Undercover officers nicknamed “rakers” were assigned to go into neighbourhoods and monitor the population.

Police built databases showing where Muslims live, where they buy groceries, what Internet cafes they use and where they watch sport.

Informants, whom they called “mosque crawlers”, were used to attend religious services and then report back.

The Associated Press obtained the secret NYPD demographics reports that compiled information on people and places and activity at different locations.

There are many similar maps of a neighbourhood in Newark, where a range of halal grocery stores as well as mosques and madrasahs, or schools of Islamic learning, are clearly marked.

In addition to specific profiles of individual US citizens, there are also descriptions of activity at many locations.

Meanwhile, Muslim groups, rights organisations and some US politicans have complained that civil liberties have been abused and they have called on the US government to investigate.

Now The Associated Press has revealed Muslim students at 16 universities across the northeastern US were also monitored.

Police looked at websites used by Muslim students, and even sent an undercover agent on a student trip.

There were new revelations that the NYPD also spied on Muslims in New Jersey. The governor there called the findings disturbing and there have been calls for an investigation.

Throughout the controversy, the mayor of New York, Michael Bloomberg, and the city’s police commissioner have maintained that no lines were crossed and that the steps were taken to protect the city.

“Law enforcement must be done in accordance with the constitution, that means just snooping and spying on people where there’s no factual basis to believe that they’re involved in any kind of criminal activity just because of what their religion is, is disturbing to me. The NYPD crossed a moral line… whether they crossed a legal one is yet to be determined.

“The basic theme of our constitution is that if you’re not doing anything wrong, government is supposed to leave you alone. But if somebody… a Muslim, Christian, Jew, Hindu or anyone is doing something that looks like it’s going to break the law, or is dangerous or harmful to others, then it is in fact the job of law enforcement to stop that.”

So has the NYPD violated civil liberties by spying on Muslims? Should the US government investigate what has taken place?

To discuss this with presenter Lisa Fletcher on Inside Story Americas are: Sahar Aziz, a law professor at the Texas Wesleyan University School of Law and a former advisor for Civil Rights and Civil Liberties at the US Department of Homeland Security; Sebastian Gorka, a national security analyst at the Foundation for Defense of Democracies; and Haroon Moghul from the online magazine Religion Dispatches who has been working with Muslim groups in New York since these revelations were published.

We also invited representatives of the NYPD, the office of Michael Bloomberg, the New York mayor, and the US Department of Justice to appear on Al Jazeera, but they either declined or did not return our calls.