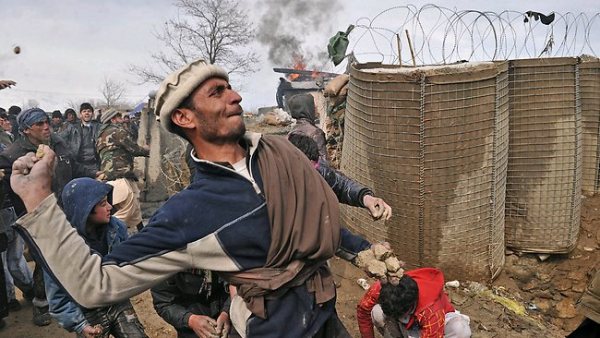 U.S. helicopters fired flares to disperse hundreds of angry Afghans who massed outside the main U.S. military base in Afghanistan after hearing staff there had burned copies of the Koran.

U.S. Defense Secretary Leon Panetta issued an apology for “inappropriate treatment” of Islam’s holy book at the base to try to contain fury over the incident – a public relations disaster for Washington as it tries to pacify the country ahead of the withdrawal of foreign troops in 2014.

White House spokesman Jay Carney later echoed his remarks, telling a briefing, “We apologize to the Afghan people and disapprove of such conduct in the strongest possible terms.”

Protesters started to gather after Afghan labourers found charred remains of copies of the Koran as they collected rubbish from Bagram air base, the provincial governor’s office said in a statement.

As many as 2,000 Afghans massed outside several gates to the base, the main centre for NATO-led forces just north of the capital Kabul, chanting anti-foreigner slogans and throwing stones, said Reuters reporters at the scene.

Afghan President Hamid Karzai and the Taliban in Afghanistan condemned the incident, both of them saying the values of Islam had been “degraded”.

Winning the hearts and minds of Afghans is critical to U.S. efforts to defeating the Taliban, but critics say Western forces often fail to grasp Afghanistan’s religious and cultural sensitivities.

A senior U.S. official, speaking to Reuters on condition of anonymity, said staff at Bagram had decided to remove “extremist literature” and other materials left in a library in the base’s detention block.

“They (the materials) were taken out of the library for good reason but they were being disposed of in a bad way,” the official said.

“There was a breakdown in judgment in this matter but there was no breakdown in our respect for Islam,” the official added.

In a statement issued by the Pentagon, Panetta said NATO had ordered an investigation into the “deeply unfortunate” incident.

NATO’s top general in Afghanistan, General John Allen, apologised for “actions” at the base and said a new order had been given to all coalition forces in Afghanistan to take part in training in the proper handling of religious materials.

“This was not intentional in any way,” said Allen, the head of Afghanistan’s International Security Assistance Force (ISAF).

The apologies did little to ease the anger.

“We want them out of our country now,” said Zmari, 30, a protester who has a shop near Bagram.

“We Afghans don’t want these Christians and infidels, they are the enemy of our soil, our honor and our Koran,” said Haji Shirin, one of the protesters at the heavily fortified compound, which is home to 30,000 foreign troops and civilians.

“I urge all Muslims to sacrifice themselves in order to pull out these troops from this soil.”

President Karzai’s office condemned the incident and said the president had appointed a delegation of senior clerics to investigate how it occurred.

“Based on initial reports, four copies of the holy Koran have been burned and the holiest values (of Islam) been degraded,” a statement from Karzai’s office said.

“Since the invasion of Afghanistan by the animal Americans, this is almost the 10th time that they have degraded the holiest values of Muslims,” said Taliban spokesman Zabihullah Mujahid in an emailed statement.

Bagram houses a prison for Afghans detained by American forces. The centre has caused resentment among Afghans because of reports of torture and ill-treatment of suspected Taliban prisoners.

Protests raged for three days across Afghanistan in April last year after a U.S. pastor burned a Koran in Florida. (Additional reporting by Mirwais Harooni and Hamid Shalizi in Kabul; Writing by Michael Georgy and Rob Taylor; Editing by Andrew Heavens and Mohammad Zargham)