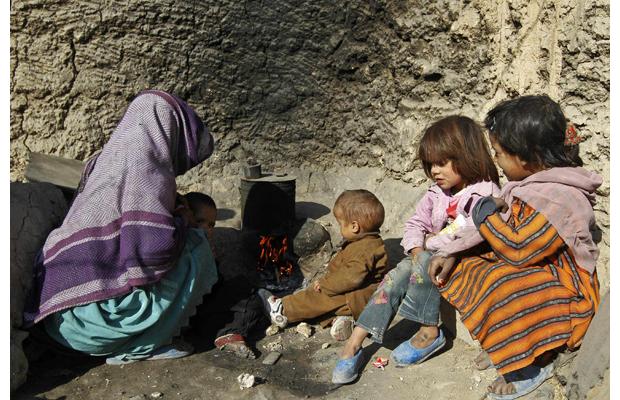 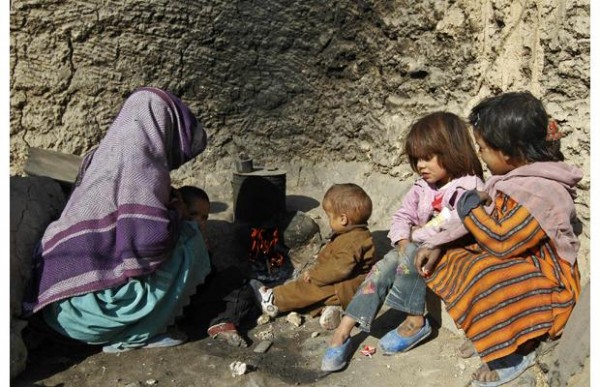 Leila is watching her baby intently, as his mouth moves trying to swallow the small blob of yellow peanut paste Dr Tayab has spooned gently into his mouth.

She sits on the floor of her one-room mud house and rocks his tiny, malnourished body on her lap. After a tense pause, the baby’s neck strains and he’s sick into a cloth the doctor holds up to his chin.

Leila holds her bundled son, Mohammed, to her face and begins to cry. Her voice is desperate. “Every time he has food he is sick. I’m so scared he’s going to die.”

She hides her face in the blankets wrapped around her son’s body, as Dr Tayab calmly prepares the next spoon of therapeutic food and begins the process again.

Leila’s fear is well-founded. Last winter, she and her husband lost their last baby – she says because the winter was so cold. The year before, her other son fell ill with pneumonia and died within a few days.

Her story is one you hear repeated across Afghanistan. More than half of the country’s families here live in extreme poverty, and this year a severe drought and high food prices have made it even harder for parents to afford enough food to feed their children properly.

The destruction is shockingly visible. Driving through Balkh province in the north, frozen rocky ground has replaced last year’s cotton and wheat fields. In the homes, most families have little to give their children except for bread and tea. For as with Leila’s husband, any chance of finding work has disappeared with the crops.

Food prices have also rocketed. The cost of wheat – the basic staple for most families – has increased by 60% since last year. Vegetables, pulses, milk or meat – foods that would give children the nutrients they need – are way out of reach for most.

Huge progress has been made in Afghanistan over the past ten years, as the international community has pumped aid into the country. Child mortality has halved, with one in ten children now dying before the age of five, compared to one in five in 2001. Maternal mortality has also plummeted, from one mum in 11 dying from issues relating to pregnancy or childbirth, to one in 50.

But these successes are under threat from the damage caused by malnutrition. More than 30,000 children already die every year in Afghanistan because they don’t get the nutritious food they need to survive. Weakened by relentless hunger, their immune systems collapse and they are unable to survive the basic diseases that finally kill them, like pneumonia or diarrhoea.

Thankfully many malnourished children will survive – and get healthy again – especially if they’ve been able to get help from local health workers and doctors.

But there is a crucial window to get help. If a child is malnourished before the age of two or in the womb – a result of pregnant women not eating enough nutritious food – the resulting damage is likely to last their whole lives. Their bodies and brains won’t develop properly, resulting in a condition called stunting. This leaves children physically shorter, with lower IQs, more likely to drop out of school early, and more likely to die. In Afghanistan, this is the case for a staggering three million children.

According to Save the Children, nearly half a billion children’s lives will be blighted by malnutrition over the next 15 years if world leaders don’t act to tackle hunger. The good news, it says, is that the solutions are known, proven, and not expensive. Basic things like fortifying food – as we do routinely in rich countries, and making sure mums are breastfeeding properly, will save millions of lives. Now we need the political will to make it happen.

Here in Afghanistan, much of the hope comes with a growing army of volunteer health workers, who are teaching mums the importance of breastfeeding, nutrition, family planning and safe childbirth.

The challenges could seem overwhelming in a place where food is so scarce. But enter a smoky mud room in Balkh, and all that changes. Around the edge of the room sit 20 women and their children, listening to Masuri, an exuberant health worker trained by Save the Children, talk to them about cooking. Individually, each woman struggles to feed her family. But here each has brought one ingredient – carrots, rice, potatoes, egg, oil or salt – to the shared pot.

In this village, under the beady eye of Masuri, the mums are able to cook regular, nutritious meals for themselves and their kids. One look at the chubby cheeks of their children and the possibility for Afghanistan’s future is clear.