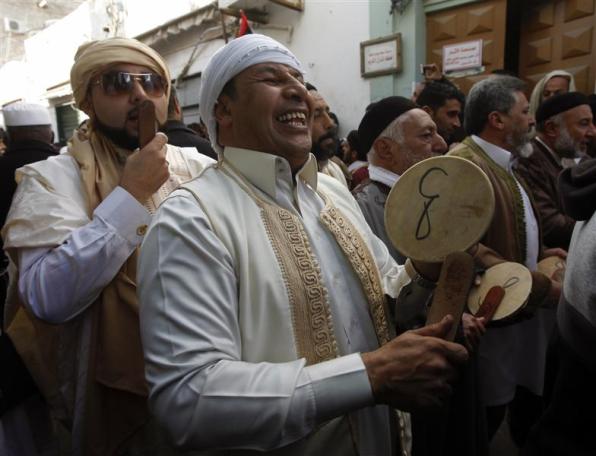 Libyan Sufis staged a joyous parade through the heart of Tripoli on Saturday to mark the Prophet Mohammad’s birthday, defying radical Salafi Muslims pressuring them to scrap the centuries-old tradition.

Chanting hymns to the beat of drums and cymbals, marchers choked the narrow alleys of the walled old town to celebrate the feast of Mawlid, a favorite event for the pious Sufis whose spirituality is an integral part of North African Islam.

The celebrations were the first since the fall last August of Muammar Gaddafi, who kept religion under firm control during his 42-year dictatorship, and went ahead despite concerns that hardliners might attack the marchers as heretics.

The tension between the traditional Sufis and the Salafis, a group influenced by Saudi Wahhabis and other ultra-conservative foreign Islamists, has become a key divide in Libyan politics as parties begin to form to contest free elections in June.

“We fought the tyrant (Gaddafi) because he was a dictator and we don’t want anyone like him to govern us again,” said biology teacher Mohammad Aref. “We are the majority.”

Emhemed Elashhab, the sheikh (Islamic scholar) at one Islamic school where marchers assembled, said there were fewer than 2,000 violent Islamists in Libya. “All normal people are against their ideas,” he said.

EITHER BATS OR THIEVES

Sufism, a mystical strain among both Sunnis and Shi’ites, dates back to Islam’s early days. Apart from the standard prayers, Sufi devotions include singing hymns, chanting the names of God or dancing to heighten awareness of the divine.

Sufis also build shrines to revered holy men and scholars and make pilgrimages to them. Hardline Islamists consider these practices grave sins that must be stopped, by force if needed.

One night last month, extremists bulldozed through a wall of an old cemetery in the eastern city of Benghazi, destroyed its tombs and carried off 29 bodies of respected sages and scholars. They also demolished a nearby Sufi school.

“The extremists have taken advantage of the lack of order,” said Jamel Abdul Muhi, a Sufi in Tripoli. “Those who work in the dark are either bats or thieves. They are cowards.”

In Benghazi, hundreds of Sufis marched to a main square flanked by 30 armed militiamen for security. Jumaa Mohammad Al-Sharif, an Islamic school teacher, said the procession was also a protest against last month’s grave desecrations.

“We caught some people who destroyed the zawiya (Islamic school) and disrespected the graves and handed them over to the authorities, but we were surprised when we later learned they had been released,” he said.

Hisham Krekshi, deputy chairman of the Tripoli Local Council, expressed satisfaction the march was taking place peacefully despite concerns about reprisals from hardliners, who spread pamphlets in recent days urging people to shun the event.

“This has been around for 14 centuries, you can’t stop it,” he said in one of the main souks, where the gold traders and cloth merchants had shut their shops for the day.

Festivities in Tripoli began with Sufi devotions in traditional Islamic schools in the old town. At Zawiya Kabira, the largest one, men chanted rounds of rousing hymns in an incense-filled room while other distributed almond milk and biscuits to those outside.

Boys lit firecrackers as lines of men danced out of the school and down the alleys, with women watching from balconies and doorways as the procession passed.

“Beloved Prophet of God, be the enemy of all His enemies,” was one of the slogans they chanted in Sufi-style repetition.

At one point, marchers spilled out onto Martyrs Square, the old Green Square where Gaddafi used to address his supporters.

Najat Al-Mughrabi, waiting with other women at a corner to watch their sons march by, said she was not afraid of the extremists. “They couldn’t do anything before (under Gaddafi), how can they do anything now?” she asked.

Even if the Mawlid holiday passes without incident, Sufi leaders say they remain concerned because many post-Gaddafi religious officials have Salafi leanings and have been appointing like-minded imams to mosques around the country.

Salafi preaching is also widespread on Libyan television and radio, they say, which raises concerns among Sufis that they are being outflanked by a new and more political form of Islam.