The Middle East has been and continues to produce some fantastic movies that bring so much delight to any of Arabic descent. Backed up by religion and culture denotations, these movies have become the bread and butter of the East. Remember the motion picture beef between the Western Hollywood and the Eastern Muslim Arabic genre of movies? How they are different in cultural dimension and how did the latter got despised by the former and left a sour taste among Arabic movie lovers?

Fortunately, there have been a whole host of movies about Islam that have been made. Movies like Lawrence of Arabia have spectacularly graced TV screens, while Sinbad has a different dimension that has attracted a lot of viewership. The belief system has been cleaned by some of these movies and stereotypes of the society have been shoved off the scene. Below are some of the fantastic Arabic movies that have been voicing the scene.

Of course, several movies about Islam have been made which we talk about in our Muslim Village Media but below is a list of the ones that really stood out. Make sure you find time to check them out when you do find the time! 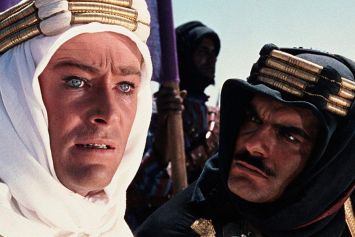 Lawrence of Arabia is an exciting film, and probably one of the successes of the East. It entails an element of tribal descent with Lawrence in the center of things. The Bedouin tribes which are native in the movie lay the base and propel the plot ahead. Lawrence is British, T.E Lawrence to be exact. His character becomes more and more interesting considering his military post of being a lieutenant.

Now, this is the whole plot; Lawrence is sent as a messenger to tip-off Prince Faisal of a possible and projected turmoil between the Arab/British against the Turks. Ali, who holds a sheriff’s post, assists Lawrence to fight off the rebels. The journey becomes interesting as the duo makes way through the desert using camels. The Turkish port becomes the center of activity in what becomes the biggest attack of the whole movie. His liaison move makes him one of the main focuses in a movie bearing an English and Muslim dimension.

We go back to the middle ages, a period where Balian becomes the major plot. Balian is a man who has an unfortunate turn of events as he losses his family. It is all religious rage in what is known as a Muslim uprising. Superb drama is on offer in what comes to be the day-to-day happenings.

Check out how the pageantry and how ancient history shapes the destiny of Balian. His final destination gets to be influenced from start to end. The entrance of Godfrey Ibelin on the scene is one important twist to the story, showing his absolute knighthood. Just make a date with the Kingdom of Heaven to experience a whole lot.

Starring Franklin Hopkins, he perfectly relates his riding ability with the Hidalgo. One of the best horse racing journeys across the desert. It is a fine combination of spiritualism and how Hidalgo sails through the harsh scene of the desert. You can catch it on Amazon Prime to get a whole lot of experience.

There is a biblical element to the whole movie because viewers have a chance to see the angel Gabriel and how the angel enlightens followers of Muslim descent to follow Mecca, the city of light. A movement to Mecca will be a rush away from oppression. Mecca is the home of Allah, the supreme being of Muslim culture.The movie is based on the 7th-century timeline. Gabriel advises people to go to Medina before taking a trip to Mecca. What a splendid way to interact with a biblical piece.

The movie bears a lot of World War series events that include Mussolini and the great General Rodolfo Graziani. You will not miss the fun when troops end up defeated by the great war leader Omar Mukhtar. Just like Lawrence of Arabia, the Bedouins tribe appears in these scenes but this time, they are led into battle with Mukhtar who goes to envisage the greatest annihilation in the whole of Arab.

Man slaughtering is at the center of things. Every age is put on the ax. The fact that it has a lot of Benito Mussolini influence makes it both an Arabic and European special because Italians can actually relate. The Fascist Party has a lot of influence in the movie that has set the pace in all walks of life.

If you are looking to learn more about the Islamic culture, as well as get entertained, then we suggest that you watch the movies above. Most importantly, these are movies that you can watch with the whole family!

May 21, 2019
Biggest Differencies Between Men And Women According To Islam
4 min read

Biggest Differencies Between Men And Women According To Islam