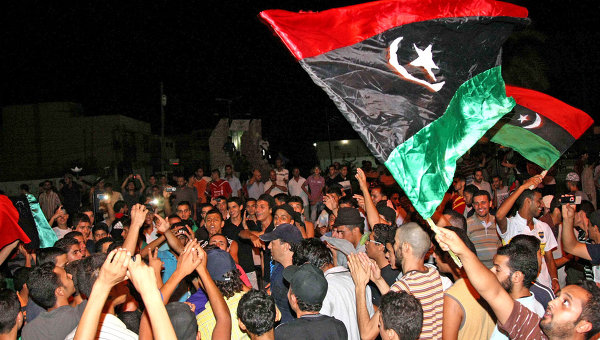 With the Gaddafi regime now consigned to the dustbin of history, and amid the triumphalism that is already starting to emanate from Washington, Paris and London over the fact, it is worth reminding ourselves that regime change was the objective from the very start of this sordid business; in fact from the moment Sarkozy gave official recognition to the Libyan opposition in advance of the no fly zone that was implemented back in March with the stated objective of ‘protecting civilian life’, rubber stamped by a UN resolution.

What is clear by now is that since the emergence and spread of the free market around the globe the concept of a state enjoying economic sovereignty has been rendered a redundant concept. Equally by now it is also the case, particularly for those nations of the developing world, that national and political sovereignty has likewise been rendered redundant, and in the last analysis a matter for the White House and its European satraps.

The unravelling of the patchwork of autocratic dictatorships, one-party states and unpopular regimes that hitherto predominated throughout the Middle East is a symptom of the global crisis of capitalism. This has either been from pressure within as in the cases of Tunisia, Egypt and still quite possibly Yemen and even Syria, where the Assad regime is coming under increasing pressure, or from without, as in the case of Iraq under Saddam and now Libya under Gaddafi. It is the result of global economic geopolitical factors exacerbating already deep contradictions in a region scarred by a century of colonialism and western intervention. These contradictions have burst asunder into political and social fissures on the ground.

Above all perhaps, the key lesson of the Arab Spring is how adept the western powers have become over their long experience in the business of exerting control over the resource rich developing world at adapting their approach according to shifting conditions on the ground. The notion of London, Paris or Washington being concerned with the protection of innocent human life and upholding the human and democratic rights of the people of the Arab world should by now have been so comprehensively refuted by their actions since the end of the First World War that only those drawing their arguments from a deep well of mendacity or ignorance would dare suggest otherwise.

Even during the course of this short period of Arab revolution and turmoil the hypocrisy and naked opportunism of the dominant powers has been laid bare. Former and recent economic partners and strategic allies such as Ben Ali in Tunisia, Mubarak in Egypt, and now Gaddafi in Libya, have or are being sacrificed upon the altar of realpolitik – in other words because of their inability to continue to rule in the old way and control their own people in the interests of the West. Here Orwell’s statement is apropos. Colonialism, he said, is like a policeman holding a man down while a thief rifles his pockets. The difference between colonalism and imperialism is in form not content. Under the former nations were controlled and administered from afar, while the latter involves the use of a local dictator or western controlled oppressive regime to effect the same result: namely the theft of the subject nation’s natural resources.

The hypocrisy during the course of the Arab Spring on the part of the western powers has been striking. At the same time as our leading politicians beat their chests as champions of freedon and democracy in the region, they continue to support the most oppressive and retrograde of all, the Saudis.

Wherever he is currently holed up, Gaddafi will be entitled to feel more than a little aggrieved at the way he’s been so unceremoniously removed from power. After all, in recent years he had gone out of his way to appease the West, opening Libya up for business, which meant signing away billions of dollars worth of Libyan oil to western oil companies. He has just learned the hard way the same lesson that Saddam Hussein, Hosni Mubarak and a host of dictators around the world learned before him. Any regime in the developing world that has the fortune, or misfortune as is the case, to sit on a sea of oil and other natural resources, is sitting on a political timebomb, its fortunes resting on the fluctuating state of the hyper economies of the West.

With NATO so crucial to the toppling of Gaddafi, the question now becomes what next? Hopefully the collective brains in Washington, London and Paris have given the state of a post-Gaddafi Libya some thought. If not, if they have failed to learn from the disaster that was Iraq, rather than bring an end to the suffering of the Libyan people, the removal of Gaddafi may well mark its beginning.

Tags: Libya what's next for libya