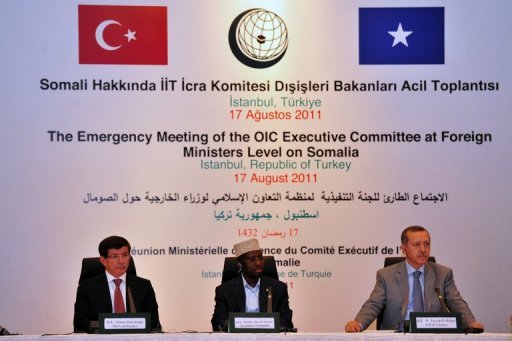 ISTANBUL — Representatives from member countries of the Organisation of Islamic Cooperation (OIC) convened in an emergency meeting in Istanbul on Wednesday on the drought and famine ravaging the Horn of Africa.

The organisation, which groups 57 Muslim countries and is currently chaired by a Turk, Ekmeleddin Ihsanoglu, is discussing how to boost aid to the countries worst affected.

“There is a fire in Somalia and what’s urgent is to extinguish that fire,” Prime Minister Recep Tayyip Erdogan said in opening remarks, inviting Muslim countries as well as strong economies of the world to extend a helping hand to the people of Somalia.

“This is a test not only for Somalia but for humanity,” he added.

“While many countries are hesitating to take action out of security concerns, Turkey is one of few countries aiding directly on the ground,” he said.

On Wednesday, Turkey sent a cargo plane carrying a field hospital and 30 tonnes of aid to Somalia.

President Abdullah Gul met his counterpart from Somalia, Sharif Ahmed, on the sidelines of the OIC meeting, called at Turkey’s request to draw attention to the tragedy in Somalia.

Erdogan is due to leave for the Somali capital Mogadishu on Thursday evening, with his wife and daughter, as well as Foreign Minister Ahmet Davutoglu and three other cabinet members and deputies from his ruling party, also accompanied by their families.

They are to oversee on Friday the distribution of Turkish aid in refugee camps.

Turkey has already sent three planes carrying dozens of tonnes of food and medical supplies for Somalis during Ramadan.

Turkish television channels have been screening footage of the catastrophe unfolding in Africa to help drum up aid.

Since the arrival in power of the ruling Justice and Development Party (AKP), an moderate offshoot of a banned Islamist movement, Turkey has taken an increasing interest in Africa.

Ankara has been playing the role of regional leader and opened several embassies across the continent with the aim of finding new markets for products from the world’s 17th biggest economy.

As a result of these initiatives, Turkey, Islam’s main representative within the North Atlantic Treaty Organisation, also secured a seat as non-permanent member on the United Nations Security Council in 2009-2010.

Somalia is the country hardest hit by a drought that has affected people around the Horn of Africa region.

UN officials have said some 12 million people are in danger of starvation.