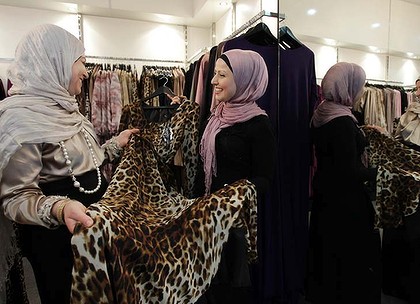 Boutique owner and Islamic fashion designer Aida Zein knows just what is needed to mark the end of Ramadan in style.

”Something funky and hot, you know,” she said, gesturing at the long dresses around her store.

Retail trade might be down elsewhere in Sydney but business is booming at Centro Bankstown as the Muslim community gears up for Eid al-Fitr, the three-day celebration that marks the end of Ramadan and traditionally a time to splash out on new outfits.

Mrs Zein, whose Divine Choice boutique specialises in modest contemporary women’s fashion, said she usually brings out two different designs a month. During Ramadan she bumps it up to 10.

Such is the seasonal sales increase that Centro Bankstown has extended opening hours during the Islamic month of fasting – believed to be the first major shopping centre to do so.

Its doors will be open an hour later tonight and on select days until August 30, with most of its 310 stores expected to take part.

The centre’s marketing manager, John Klein, said Ramadan had become such a key time for fashion sales that the centre launched its new spring-summer season to coincide with it.

”Next week our catalogue comes out on Wednesday, which is perfect timing when everyone is thinking of buying their new outfits,” he said.

According to the 2006 census, 15 per cent of those in the Bankstown local government area are Muslim, making Islam the second largest religion there.

Mr Klein said the centre had been watching the growth in Ramadan trade, but it was approached by business owners keen to capitalise on demand by keeping their doors open for longer.

However, it is not just the specialist Islamic fashion retailers that stand to benefit. George Turjman, owner of Jon Kell Menwear – a 33-year veteran of the centre – said the religious season marked a 25 per cent rise in trade.

”For Christmas they like to spend on electricals for the kids. This one here, they dress up,” he said.

Sisters Howayda Moussa and Hanadi Chehab opened Integrity Boutique weeks ago, just in time to capitalise on the Ramadan rush.