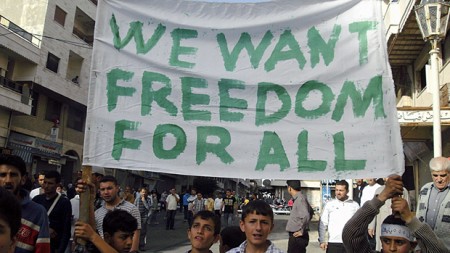 Syria’s government has passed a law to lift the country’s decades-old state of emergency as protests against the rule of President Bashar al-Assad continue.

The state security court, which handled the trials of political prisoners, has been abolished while a new law allowing peaceful protests has been approved.

The repeal of the emergency law was a key demand of protesters.

Correspondents say the legal changes will be remarkable to most Syrians after decades of one-party rule, but it is unclear how much difference they will really make, and they may not be enough to satisfy the protesters.

Anti-government demonstrations are reported to have begun in the north-western city of Baniyas after the emergency law was passed.

Several hundred people were also reported to be rallying on the streets of Damascus.

The new law must now be signed by President Bashar al-Assad before it comes into effect.

Under the legal changes, permission from the interior ministry will be needed to demonstrate in Syria.

But the country’s interior minister has nonetheless urged people to refrain from taking part in any rallies in the interests of safety and stability.

Mohammed Ibrahim al-Shaar told people “to refrain from taking part in all marches, demonstrations or sit-ins under any banner whatsoever”, in remarks carried by the official news agency, Sana.

He warned that if demonstrations were held, “the laws in force in Syria will be applied in the interest of the safety of the people and the stability of the country”.

The BBC’s Lina Sinjab in Damascus says Syrians received the news that parliament had lifted the state of emergency with a sense of caution, waiting to see if the changes are implemented on the ground.

There is still concern over the role of security apparatus in Syria, which is immune to any legal system, our correspondent says.

Activists say about 200 Syrians have died in weeks of unrest challenging the rule of President Assad.

Witnesses in Homs, the country’s third-largest city, said security forces had opened fire early on Tuesday to disperse a mass anti-government protest there.

At least 5,000 demonstrators occupied Clock Square in Homs on Monday after mass funerals for about 12 protesters reportedly killed by security forces at the weekend.

Security forces swarmed into the main square before dawn. Witnesses said security forces told them through loudhailers to leave, before firing tear gas, then live ammunition.

A protester called Omar told BBC Arabic that he had seen one person shot dead.

“Listen to the shooting,” he said. “Can you hear it? It’s hammering on us like rain.

Another demonstrator in Homs told the Associated Press news agency by telephone: “I saw people on the ground, some shot in their feet, some in the stomach.”

On Saturday, Mr Assad promised an imminent end to the state of emergency, which has been in place for 48 years. The authorities have also been freeing political prisoners – another key demand of the protesters.

But Syria’s unprecedented wave of unrest shows no sign of abating.

The government has said an “armed insurrection” by Salafist groups is taking place in Homs and further north in Baniyas.

Salafism is a strict form of Sunni Islam which many Arab governments equate with militant groups like al-Qaeda.

Sana news agency has also been reporting on events in Homs.

It said three army officers, including a brigadier general, together with his two sons and a nephew, were killed on Sunday by “armed criminal gangs” which then mutilated the bodies.

Demonstrations against Mr Assad’s ruling Baath Party spread after breaking out in the southern city of Deraa in mid-March.

The unrest poses the gravest threat to his rule since he succeeded his father Hafez al-Assad 11 years ago.

History of the Emergency law

Syria’s emergency law, which effectively suspended most constitutional protections, had been in place since the Baath Party came to power in a military coup.

Syrian governments previously justified the imposition of the law by the state of war that continues to exist with Israel, and by threats posed by militant groups.

Syria’s emergency law designated the prime minister as the martial law governor of the country and the interior minister as his deputy, and gave them extraordinary powers.

These included the ability to place restrictions on freedoms of individuals with respect to meetings, residence, travel and passage in specific places or at particular times; to preventatively arrest anyone suspected of endangering public security and order; to authorise investigation of persons and places; and to delegate any person to perform any of these tasks.

The Syrian Human Rights Committee described the emergency law as “the most repressive law [affecting] the rights and freedoms of all Syrian citizens without exception”. It is believed to have led directly to thousands of violations of human rights.