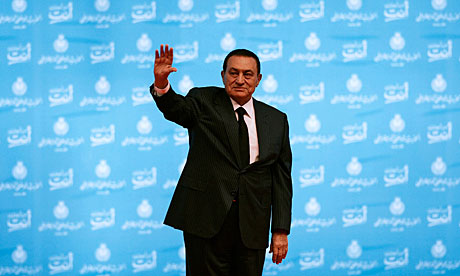 Ousted president Hosni Mubarak ran Egypt as his own private estate, carving up its resources and siphoning off its capital into offshore accounts. But he didn’t do it alone: he had help from his family and a few trusted friends.

“The Mubaraks treated this country like it was their own fiefdom,” says Amir Marghany, a corporate lawyer investigating the Mubarak regime’s corruption trail. “The family was crazy about luxury and prime real estate… and used the top financial brains in the country to create rules to make them richer.”

Mubarak was forced to step down on Feb. 11 after nearly three weeks of nationwide demonstrations calling for his removal. The 82-year-old former dictator is reported to be under guard in an Egyptian military hospital after complaining of heart problems that began as anti-corruption investigators began to interrogate him.

Prosecutors have accused Mubarak of amassing billions of dollars during his 30 years in power through kickback schemes and corrupt business dealings. His vast wealth is believed to be tied up in secret bank accounts, gold bullion, and ritzy villas and hotels in the United States and Europe.

“Mubarak’s wealth is in the billions in a country where over 40 percent of the population live in poverty,” says Ahmed Sakr Ashour, a professor of business administration at Alexandria University. “The huge contrast shows that the president abused the authority of his position to enrich himself.”

Egypt’s interim government has launched the largest corruption probe in the nation’s history to identify, sequester and – it is hoped – recover Mubarak’s illicit fortune. Investigators are working with local corruption watchdogs to follow the money trail, while foreign governments have been asked to freeze the former ruling family’s overseas assets.

“You can’t imagine the number of people stepping forward with information,” says Marghany, who recently joined the Egyptian Legal Group for Redemption of the People’s Wealth (ELGRPW), an ad hoc group of lawyers and jurists seeking restitution of Mubarak’s ill-gotten gains.

ELGRPW is appealing to whistleblowers and using its worldwide network of professional associates to help investigators untangle the complex web of shell companies, anonymous trusts and offshore bank accounts. The group claims to have renowned corruption investigators and “the high priests of corporate law” on its ticket.

Investigations have revealed that Mubarak, a former air force commander, sat at the top of a pyramid of corruption that extended all the way down to the lowest civil servant. But it was the privileged few – family and friends in the top tiers – who benefitted most from their proximity to the “Pharaoh,” as he was often called.

“To operate any successful business in Egypt required taking on the Mubaraks or one of their proxies as a partner,” a Cairo-based financial expert told IPS. “If you cooperated, you were given a virtual monopoly over your domain; if you refused you were run out of business, or worse.”

While relatively little is known about how Mubarak accumulated his personal fortune, a clearer picture has emerged about the illicit dealings of his family.

“The real shock is not the wealth of Mubarak himself, but what his two sons have been able to accumulate over the last 25 years,” says Ashour. “From the time they graduated they entered into shady business dealings and exceeded their father in terms of corruption.”

Alaa Mubarak, 49, and his younger brother Gamal, 47, are currently being held for investigation in a high-security prison south of Cairo.

According to Ashour, Alaa was the first to wade into business, taking shares and kickbacks in high- profile transport, construction and real estate projects. But his “mafia-style” dealings were soon overshadowed by those of his more financially savvy brother, Gamal, who after working as an investment banker in London, returned to Egypt in the late 1990s to begin a meteoric rise up the political ranks.

In Feb. 2000, Mubarak appointed Gamal and a number of his business associates to the general secretariat of his ruling National Democratic Party (NDP). Gamal was later promoted to head the NDP’s powerful Policies Secretariat, fuelling assumptions that Mubarak was grooming his son as his successor – a charge the family has long denied.

Prosecutors have accused Gamal of leveraging his growing political power to introduce new economic policies and financial regulations that allowed him and his associates to plunder Egypt’s public assets. Vast sums made through stock market manipulation and kickbacks from the sale of undervalued state assets were funneled into offshore bank accounts.

“It was a marriage of politics and money,” says Marghany. “The schemes and the way they covered their tracks became more sophisticated over time.”

The Mubarak family made a fortune on Egypt’s stock market through Bullion, a Cyprus-registered securities fund with nearly 1 billion dollars under its management. Gamal holds a 50-percent stake in the fund, while Alaa owns an undisclosed stake and sits on its board.

Investigators are also keying in on dozens of controversial land deals in which coveted state properties were awarded to Mubarak’s cronies without competitive tenders and at prices far below valuation. One of the most controversial deals involves the sale of prime residential land to Sixth of October Development and Investment Company (SODIC), a developer owned by Alaa’s father-in-law, Magdi Rasekh.

Meanwhile, a loophole in Egyptian company law may have helped the Mubarak family launder their kickbacks.

In order to establish a joint stock or limited liability company all shareholders are required to deposit their share of the capital into a bank account. Yet there is no mechanism to confirm who is providing the money.

“Some guy can just show up with a suitcase full of cash, or wire transfer it from anywhere in the world,” Marghany explains. “This way you get your kickback in the form of free shares in the company, and on paper you’ve paid for your shares and are a legitimate business.”

Over the last decade, hundreds of conglomerates were formed and divvied up by a small group of Mubarak associates, and in which Gamal and Alaa were assumed to be silent partners. The original shareholders would usually wait a year or two to collect dividends, then exit with a put option on their shares – making enormous sums in the process.

Egyptian prosecutors are also putting together a case against Mubarak’s wife, 69-year-old Suzanne – whose reputation for extravagance and haute fashion have earned her tabloid comparisons to Marie Antoinette.

Anti-corruption investigators recently discovered that the former first lady maintained a secret account at the National Bank of Egypt with over 147 million dollars in donations from European countries intended for the Bibliotheca Alexandrina. The library’s administrators claim they were unaware of the existence of the account, for which Suzanne had sole signatory power.

The discovery appeared to confirm long-held suspicions that the former first lady’s involvement in various NGOs and charities was merely a front for capturing foreign donations. Investigators are now examining her other pet projects, including literacy campaigns, a peace movement, and a children’s cancer hospital.

Mubarak vehemently denied the corruption allegations leveled against him and his family in a pre- recorded television speech broadcast on Apr. 10. The deposed president’s defiant tone and threats angered many Egyptians and appear to have precipitated the legal action against him.

Now, as government agencies and groups like ELGRPW attempt to trace and recover the Mubarak family’s illicit wealth, they are also drawing up plans on how it should be used to develop the country. Marghany says it is important to demonstrate to countries whose economies could be impacted by the restitution of these assets that Egyptians are worthy of receiving them.