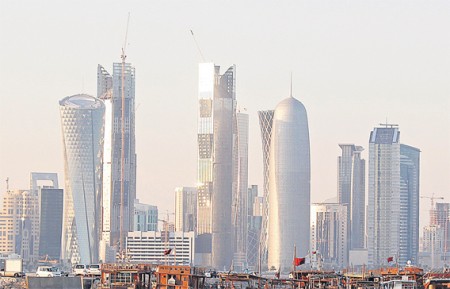 Islamic finance has been given the boost it needed in the Gulf by a Qatari ban on conventional banks offering sharia-compliant services.

Qatar’s move last month draws a line in the sand between Islamic banks and their conventional peers, which control 83 percent of the region’s banking assets.

Even before Qatar’s shock decision, the Islamic finance industry was expected to grow by between 15 to 20 percent a year, PricewaterhouseCoopers said in a report in November.

If Qatar’s move to separate conventional and sharia-compliant operations is mirrored by other central banks eager to prove their commitment to the nearly $1 trillion Islamic finance industry, this will be higher.

“I wouldn’t be surprised if market share in the UAE were to double from 25 percent to 50 percent in the next five years. Given this move in Qatar, I think it is even more likely,” Humayon Dar, chief executive of consultant BMBIslamic said.

Islamic banks have suffered from Western banks in the region offering sharia-compliant products, eating into their market share during 2010.

Now Islamic institutions will no longer have to compete with them for loans and deposits and would potentially be able to buy their Islamic portfolios at favorable terms, Goldman Sachs analyst Waleed Mohsin said in a research note.

There are clear and immediate benefits for firms such as Qatar Islamic Bank QISB.QA, which could add 35 percent to its loan book if it captures even 50 percent of the Islamic assets expected to flood the market following the Qatari central bank’s decision, Jaap Meijer, an analyst at AlembicHC, said.

That type of gain could easily be seen in other Islamic banks in the region if other countries follow Qatar’s move.

Aside from the redistribution of assets immediately following the ban, Islamic finance will benefit most from cutting its ties to conventional finance, which can influence business transactions.

“There is always a tug-of-war between an Islamic branch which wants to follow the spirit of sharia and the conventional bank that is looking at transactions purely through a financial lens,” a UAE-based Islamic banker said.

And the move may spur the creation of rules and regulations, ultimately driving product innovation, after being criticized for too closely mirroring conventional finance.

“This may help Islamic finance to start innovating rather than being a shadow of conventional finance,” the banker said.

Qatar’s central bank has already said it will launch new capital adequacy rules for Islamic banks, which Islamic bankers say could be based on the guidelines set by Malaysia’s standard-setting body Islamic Financial Services Board.

The IFSB includes rules relating to exposures in investments made under profit-sharing modes and credit risk exposure in Islamic financing in connection with accounts receivable in “murabaha” contracts and counterparty risk in contracts for deferred delivery known as “salam” contracts..

Murabaha is a cost-plus financing in which an Islamic bank purchases and takes title to the necessary equipment or goods from a third party. It then sells on the equipment or goods to its customer at cost plus a reasonable profit.

While a move toward more regulation and autonomy may benefit the industry, some warn that the industry should not be too hasty in supporting a full separation just yet.

Some transactions, such as hedging, require the back office expertise and support of conventional institutions, one sharia scholar who asked not to be named, told Reuters.

“It’s too early in the industry’s development to separate completely from the big boys. Let the baby grow a little bit before you let them loose on the highway in a Corvette,” he said.

The industry is largely run by bankers and lawyers who have been trained in conventional finance. And while they rely on Islamic scholars to help guide them in matters of sharia, they have the business acumen to run the banks properly.

It is not only on capital adequacy that Malaysia, with its well-established and thriving Islamic finance industry, is expected to provide a model for the Gulf.

It would alleviate concerns about mixing assets or worries that Islamic money could fund conventional transactions.

It would also prompt a greater accountability from directors, who would be forced to scrutinize accounts and operations of Islamic banks more closely to ensure compliance.

“This will have a positive impact because there will be a lot of putting the house in order,” Ashar Nazim, director of Islamic financial services at Ernst & Young, said.

“Right now the biggest threat to Islamic banking is the credibility of the existing system.”