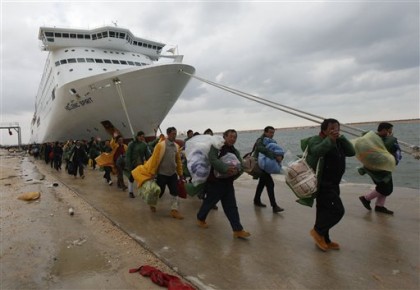 Chaos in Libya reveals power lines that cut across the corrupt, complacent structures of the old Arab dictators.

Of all the unexpected events in the Middle East, none underlines the sense of a changing world order more clearly than the arrival of a Chinese warship in the Mediterranean. The 4,000-ton missile frigate Xuzhou is protecting an enormous programme of evacuation that has already moved 20,000 Chinese nationals out of Libya. Beijing is sending 15 aircraft a day for the next two weeks to fly them home from Malta, Crete and other locations.

The Xuzhou is heavily armed with missiles and, more worryingly, nicely positioned to eavesdrop on Nato powers. But no one can argue that China does not have an interest in the region; it has tens of thousands of workers in the Middle East and hundreds of thousands in Africa. Moreover, the price of oil is a matter of vital importance to a country intimately tied in to the global economy. If a fuel crisis sends the world economy into recession, the stability of China will be threatened; therefore Beijing is behaving as if it were part of the Middle East.

And, in a sense, it is. Until recently, the West has thought about globalisation chiefly in economic terms: specifically, the replacement of geographical trade networks by technological ones. Now we are seeing just how profoundly globalisation has changed geopolitical relationships. Chaos in Libya reveals power lines that cut across the corrupt, complacent structures of the old Arab dictators. China’s super-efficient evacuation of its people will reinforce its status in the region; likewise, the faltering performance of some Western powers – including Britain – displays their relative weakness, while the inability of sub-Saharan nations to rescue their workers highlights their economic helplessness.

Meanwhile, it comes as no surprise that non-Arab Iran has plunged into the middle of these Arab convulsions. Tehran has greeted what it calls the “Islamic awakening” – but is also using the crisis to sell more of its crude oil. Last week two Iranian navy ships passed through the Suez Canal en route to Syria, the first to do so since 1979. Given Iran’s links to Hezbollah, Israel is understandably alarmed.

Like China, with whom it has just signed a major oil deal, Iran worries about scenes of North African unrest and is blocking internet access. But both Beijing and Tehran are quietly satisfied by the way events in the Arab world have wrong-footed the West. America and Europe find themselves praising democratic movements in countries whose dictators they have been propping up. Their embarrassment is a gift to ruthless states that have never paid more than lip service to democracy and now sense a chance to reconfigure the Arab world in their own interests.