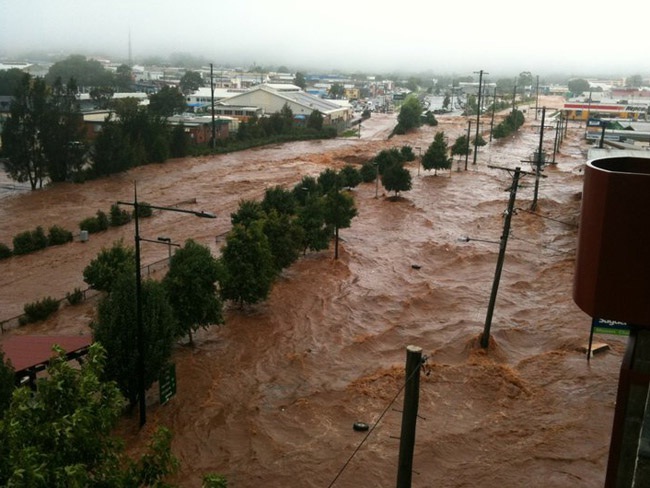 The death toll from south-east Queensland’s flood crisis has risen to 10, as Brisbane and Ipswich prepare for unprecedented flooding over the next two days.

Heavy rain, releases from the giant Wivenhoe Dam and high tides are set to combine to cause major flood peaks in the cities.

The number of missing people has been revised upwards to 78, and there are serious concerns for 18 of those people.

The weather bureau has lifted a severe weather warning for the region but the bureau’s Brett Harrison says the general flood threat remains the same.

“All of the flood predictions were related to the water that was already on the ground,” he said.

Authorities say thousands of properties could be flooded as the Bremer and Brisbane rivers hit record levels over the next two days.

The Brisbane River is set rise to 4.5 metres on Wednesday and could go higher than the 1974 floods that reached 5.45 metres.

The Bremer River at Ipswich is now expected to reach 22 metres on Wednesday morning – 1.5 metres above the 1974 levels.

Large parts of Brisbane are already affected by flooding. A number of shops in the CBD have been evacuated and the State Library has closed because of the extreme weather conditions.

A steady stream of debris is floating down the swollen Brisbane River, including boats ripped from their moorings by the force of the current, and a whole ferry pontoon.

Queensland Premier Anna Bligh says the scale of the looming disaster is constantly being reassessed.

“If we see these sorts of levels in the Brisbane River we would expect to see somewhere above 9,000 properties affected significantly and more than 30,000 other properties having some impact,” she said.

Ms Bligh has urged people not to panic.

“We are facing one of our toughest ever tests, we will only pass this test if we are calm,” she said.

“Now is not a time for panic, it is a time for us to stick together.”

“Stay calm but act wisely and if you’re in doubt, evacuate to friends or evacuate, don’t take any unnecessary risks,” he said.

The death toll from the wild flooding has risen to 10.

The latest victim was a four-year-old boy who drowned while being moved to safety at Marburg, near Ipswich.

Ipswich Mayor Paul Pisasale said the boy, who was wearing a flotation jacket, fell out of a rescue boat and was swept away in floodwaters.

Mr Pisasale says Ipswich is preparing as best it can.

“If you think I’m panicking, yeah I am, but I want everyone to stay calm because we’re going to resolve this together,” he said.

Preparations are being made for around 1,000 at the main Brisbane evacuation centre at the RNA Showgrounds.

Pallavi Datar and her husband arrived around 5:00pm (AEST) on Tuesday.

Ms Datar says they are grateful for the speedy response by authorities.

“When we left the home we didn’t know where to go, but we were hoping that there would be some arrangement made by the city council,” she said.

“We are really really appreciating the situation that the city council was so prompt in setting up a evacuation centre for people like us, because otherwise there would have been really nowhere to go.”

Around 800 Ipswich residents have sought shelter at evacuation centres in the city.

Greg Goebel, the executive director of the Australian Red Cross, says the Ipswich residents are distressed but coping well.

“There’s been no panic but there’s obviously been an influx of people as the day and night has gone on, but people are generally well behaved,” he said.

“They realise the gravity of the situation and they also realise that they need to take action now to move to safety.”

Residents in flood-affected south-east Queensland are being urged to conserve their drinking water over the next 48 hours.

Barry Dennien from SEQ Water says some of the organisation’s treatment equipment has been damaged by the floods.

He says it is important the treated supply is preserved for the next couple of days.

“We’d like people to just be a touch conservative with the water they are using. It’s safe to drink. It’s perfectly OK,” he said.

“But if they could just be atouch conservative. That way we can maintain them full and get them through the next coming days which is critical.”

Prime Minister Julia Gillard says it will take many months for communities to recover from the devastating floods.

She says the Federal Government is doing all it can to help people affected by the flooding.

“We’ve already processed more than 10,000 claims and paid more than $13 million and this is just the start – there will be more payments and support for people in recovery and then all of the rebuilding to do.”

Lifeline is appealing for donations to help its crisis hotline field calls from those affected by floods.

The organisation is dealing with large phone bills as they provide counselling from call centres across the country.

Lifeline’s Chris Wagner says they are providing support around the clock for people looking for someone to talk to about the disaster.

“Nationally our centres are all heavily manning the 131114 24-hour crisis telephone service,” he said.

Residents in Brisbane’s CBD and Ipswich could be plunged into darkness as authorities cut off power supplies as floodwater levels rise.

Energex says the outages will impact hundreds of thousands of customers.

Supply will be cut to Ipswich on Tuesday night and Brisbane from 7:00am (AEST) on Wednesday.

The company says the restoration of supplies will depend on floodwaters receding and the amount of damage caused to its substations and network.

Meanwhile, Deputy Police Commissioner Ian Stewart says police are daunted by the scale of the disaster in the Lockyer Valley.

A raging torrent of water swept through Toowoomba and the Lockyer Valley on Monday, and heavy rain yesterday again pushed creeks to major flood levels.

“Certainly Grantham is one of the focus, but the other one is the Murphy’s Creek and Withcott area,” he said.

“That’s the other area we’re having difficulty getting into, and it’s going to take us a long time today to get to every one of those areas.

“I mean, the sheer scale of this operation is quite daunting when you look at the number of places and creeks that have been affected.”

Many towns were either badly damaged or wiped out by the flash flooding. Homes were knocked from their footings and cars were washed away.

Where the water has dropped slightly, there has been tonnes of mud and debris left behind.

A telephone hotline – 1300 993 191 – has been set up for people seeking information on friends and relatives caught up in the flooding disaster.