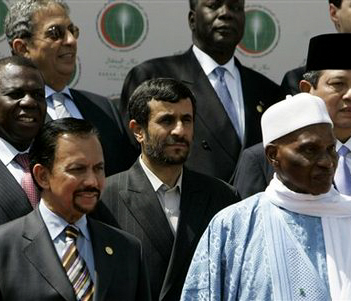 The organization representing the world’s biggest grouping of Muslim majority nations is seeking to attract more overseas investment by offering the first Shariah compliant stock index from its 57 members.

The Organization of the Islamic Conference based in Jeddah hired Standard & Poor’s to start an index of about 50 of the most traded stocks in the first quarter of 2011, Huseyin Erkan, the Istanbul Stock Exchange’s chief executive officer and coordinator of the initiative, said on November 8.

The index, which will track listed equities that comply with Islam’s ban on alcohol, gaming and tobacco, aims to target exchange traded funds, he said.

“Governments of Islamic countries want us to cooperate in capital markets to facilitate cross-border trading,” Erkan said in an interview in Abu Dhabi. “One of the easiest and most efficient ways to improve trading is to build indexes and exchanged-traded funds.”

The OIC, which includes the United Arab Emirates, Indonesia and Pakistan and is the second largest grouping of countries after the United Nations, is seeking to speed up the establishment of a free trade area and an Islamic economic union for its more than 1.4 billion people, according to its Website.

Assets held by Shariah compliant funds is estimated at $52.3 billion, Ernst & Young said in its Islamic Funds & Investment Report in May, and companies and governments in the Middle East and Asia have introduced Shariah compliant stock indices and funds to attract inflows.

Templeton Asset Management Ltd.’s Mark Mobius said he’s a “big fan” of Islamic funds and the “potential assets that are available to the Islamic asset management industry” is more than $480 billion.

“The equity side is where we are going to see big growth going forward,” Mobius, who oversees about $34 billion as executive chairman of San Mateo, California based Templeton’s emerging markets group, said at a conference in Manama yesterday. “The potential is very, very great.”

News Corp.’s Dow Jones & Co and MSCI Inc. currently offer Islamic indexes that track the performance of companies in the US, Singapore, Japan, Europe and Malaysia that meet Shariah principles.

The S&P 100 Pan Islamic Market index tracks 100 companies from the six nation Gulf Cooperation Council and Asia, according to data compiled by Bloomberg.

Bursa Malaysia, the stock exchange manager in Kuala Lumpur, and FTSE Group offer Islamic equity indexes including the FTSE Bursa Malaysia EMAS Shariah index, which tracks 271 large and mid-cap stocks, according to data on its Website.

“The more indexes covering Islamic equities the better,” Shehzad Janab, head of asset management at Dubai based Daman Investments said on November 24. “It’s a virtuous circle. More indexes mean more people following them, better awareness and it will force companies within the indexes to be more transparent.”

The Dow Jones Islamic Market World Index, which tracks global shares that meet Islamic investment guidelines and has a market capitalization of $12.8 trillion, climbed 7 per cent this year, while the Dow Jones Global Index gained 6.4 per cent in the same period. Shariah compliant bonds returned 11.4 per cent so far this year, according to the HSBC/NASDAQ Dubai US Dollar Sukuk Index.

Matturri said in a November 5 Interview in Abu Dhabi: “The rationale behind this move is that it attracts attention from both local and off shore investors who want to bring flows in, the tradable version could ideally be used for launching exchanged traded funds.”

ETFs may help OIC countries attract some of the $79.9 billion of inflows into emerging markets this year, which is set to exceed 2009’s record $83.3 billion, according to EPFR Global. ETFs are index-based investment products that allow investors to buy and sell shares of entire portfolios of stock in a single security.

“You’re targeting global Shariah players, and not just regional players,” Azzi said in a Nov. 23 interview in Dubai. “They will be able to invest in Islamic markets which are outside the jurisdiction of the GCC or Europe. You have got all of the Islamic markets come under one umbrella.”

Malaysia’s 3.928 per cent Islamic note due in June 2015 fell, pushing the yield up 2 basis points, to 2.89 per cent, according to prices provided by Royal Bank of Scotland Group.

The extra yield investors demand to hold Dubai’s government sukuk rather than Malaysia’s narrowed 2 basis points to 381 basis points today, according to data compiled by Bloomberg.

The difference between the average yield for emerging market sukuk and the London interbank offered rate widened 4 basis points to 344 yesterday.

Sajjad Anwar, who helps manage the equivalent of $160 million of Islamic and non-Islamic funds at NBP Fullerton Asset Management Ltd, said he will invest in funds tracking companies in OIC member states.

“This is feasible and viable as it will provide a common platform to investors in the Islamic world,” Anwar said in a phone interview from Karachi on November 24. “The move is likely to promote the Islamic finance industry.”