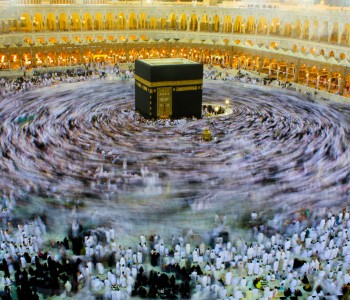 Abu Uthman al-Sabani al-Shafi’i (d 449) in his book Kitab ul Maitain narrates Prophet Muhammad as saying, “towards the end of the time, four main groups of people will flock around the Ka’ba to perform Hajj: The powerful rulers to have fun or to enjoy the occasion, the rich people to promote their businesses, the poor to seek financial support and the reciters (or scholars) to demonstrate their skills.”

Al-Sabuni was not an ordinary scholar. He narrated the Hadith after ensuring that the matan or text and isnad or chains are sound. He once said “I never narrated a Hadith nor a non-Prophetic report in a gathering except if I possessed its chain of transmission; nor did I ever enter the library except in a state of ritual purity; nor did I ever narrate Hadith, nor hold a gathering, nor teach, except in a state of ritual purity.”

Are we living in that period that was predicted by the Prophet? Has Hajj really become a type of ritual devoid of any meaning? Is Hajj an individual ibada (worship) that requires a believer to spend time and resources to get closer to an Omni-potent and Omni-present God? Has the Hajj become a business in our times? Or has it become a vacation?

There was a time when people would spend months and months preparing themselves financially and spiritually to live the real meaning of Hajj. However now a days Hajj is offered as a holiday package. Many Hajj agencies all over the world offer value packages with super programs, deluxe programs and short executive program. These programs offer the best and closest accommodation in Makkah and Medinah, best available food and best possible position in the House of Allah. Depending how much you pay, you can get the finest place in Makkah and Medinah. If you happen to be the guest of royalty, then probably, no one can ever compete with your placement in the two mosques. When the Prophet performed his only Hajj, the only provision that he had with him was no more than four dirham as narrated in several books of ahadith.

Hajj was meant to teach the pilgrims endurance and perseverance for higher causes, yet it has been turned into an exercise in convenience. Hajj was meant to express the utmost humility in the presence of the rest of humanity by declaring that “Here I am, Here I am, I will not make anyone Allah’s partner. Allah is the one who is in control of everything and He alone is the one who is the source of all blessings and praise.”

Hajj is an institution that is supposed to reassure the people that ethnic, cultural, linguistic, geographical, wealth-based, race and colour differences that humans have imposed upon themselves have no reality in the presence of God. All are one and the purpose of all is to follow the divine guidance to create a universal humanity to the wellbeing of everyone. Hajj is meant to be a pledge to live example of Hajj beyond the Hajj. It is an occasion to create a personality without a dimension and space.

Yet, through social engineering and manipulation of resources, Hajj is rapidly adapting social elements that distinguish the rich from the poor, the very institution that it is supposed to demolish. Divisions among Hujjaj on the basis of their ethnicity and money are visible throughout the Hajj journey.

The Quran describes Ka’ba as a centre of guidance to humanity. “Indeed the first House of Worship open to all was established in the Noble Makkah. Indeed this House is the centre of guidance to all humanity.” (3:96) The place was not only a place for bringing together all the people but it is a centre for promoting peace. (2:145). It was a place that was meant to help humanity realize its universality rather than divisions (5:97)

For this great purpose of helping humanity realize its dream of removing all the differences and divisions among themselves the institution Hajj come up with the clear example of making us understand and observe that unity of humanity is possible. For this the Quran asked Prophet Ibrahim to invite people to Hajj, so that they may witness the beauty and magnificence of the guidance of Allah.

Hajj is like a united nations in its real sense without five elitist powers. With no hidden agenda and security council privileges, each nation and community comes to Makkah with the single purpose of serving God and reiterating their covenant with Him. Hajj provides the opportunity to everyone to witness the common bonds among people regardless of their differences. Hajj promotes the idea of dignity of human beings, male or female, young or old and rich and poor.

Hajj also creates space for intellectual ideas among people so that they could all remain focused on their main agenda of serving humanity through following the guidance of God.

It is this spirit of Hajj that was prevalent at the time of the Prophet and his trusted companions. It is this spirit of Hajj is now being challenged by the modern business-dominated society and hierarchy of rich and poor culture. However, among all this razzmatazz, still there are people who come to the Hajj to take the inspiration to transform themselves for a better future both for them and for others. They are the ones who do not care about big hotels or better facilities. They are the ones who spend their days and nights in Mina, Arafat, Muzdalifa, Makkah and Medina. Here they remember the covenant that Allah made with Prophet Abraham, the builder of Ka’ba. Prophet Abraham was told by God, Almighty, “I am making you the source of balance and inspiration (The Quran uses the word Imam, that literally means the instrument that a construction worker uses to level the construction) for all people,” (2:124). Encouraged by this honour, the Prophet asked: “Is this covenant for my progeny too,” No” said Allah, “Those who deviate from my path would not qualify for this honour,” (2:124)

In these simple words thus was described the real intent and purpose of the Hajj and all other faith based institutions. The dignity and honour does not come with buying this or that package. It comes through dedication and commitment to the divine values and living up to them.

Someday, the Hajj will be restored to its originally intent by those un-known and un-recognized faces who come from all over the world quietly without any fanfare and who spend every moment of their presence in the noble sanctuaries and the pilgrimage path with the determination to follow their real leaders: Prophets Ibrahim, Prophet Ismail and Prophet Muhammad, peace be upon them, in every aspect of this great institution.