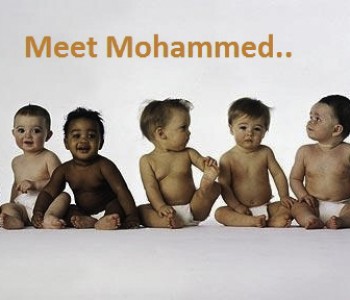 Last year’s most popular name for baby boys in England has been knocked off — by Mohammed.

That’s not immediately obvious from data put out this week by the Office of National Statistics, which declared Wednesday that Oliver was the single most popular name for boys born in 2009.

But a CNN analysis of the top 4,500 boy’s names shows that, when the 12 different spellings of the Arabic name are lumped together, Mohammed is No. 1.

The United Kingdom is about 4.6 per cent Muslim, with just under 2.9 million Muslims according to the Pew Forum on Religion & Public Life.

And Muslims have a strong tendency to name their sons Mohammed.

“The first reason why people keep the children’s name Mohammed is because of their love of the prophet Mohammed, because they want to emulate him,” said Imam Abdullah al-Hasan of the East London Mosque.

“They want to copy him not just through his behaviour and conduct, but also his name,” said the imam, who is thinking about naming his own newborn son after the founder of Islam.

The Muslim population has risen rapidly in Western Europe in the past 20 years, according to the Pew Forum on Religion & Public Life.

From under 10 million in 1990, it’s gone up to about 17 million today, the think tank said in a report last month.

That has been accompanied by tensions ranging from racial violence in parts of England to legal restrictions like banning the burqa in France and banning minarets in Switzerland.

But al-Hasan says Britain has nothing to fear.