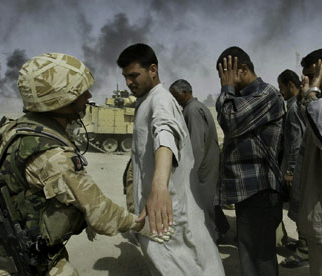 A specialist team appointed by the government to investigate claims of abuse by British troops in Iraq has received 90 complaints involving 128 Iraqi civilians. The files, relating to allegations between March 2003 and July 2009, have been sent to Geoff White, a former head of Staffordshire CID, who heads the Iraq historic allegations team.

The unit, the creation of which was announced in March, comprises 80 staff including military investigators and former Scotland Yard homicide detectives. A Ministry of Defence spokesman said: “The team is investigating all alleged cases of abuse by UK service personnel in Iraq and will identify any action that needs to be taken. We anticipate this should take around two years.”

White has met Phil Shiner, of Public Interest Lawyers, who will begin a case in the high court on Friday on behalf of 142 Iraqis who claim they were abused by British troops in the aftermath of the war to topple Saddam Hussein.

This week’s high court case, coming just one week after the release of thousands of classified Iraq war documents on the whistleblower website WikiLeaks, will determine whether a public inquiry should be ordered to disclose the scale of alleged abuse of Iraqis detained by British troops. MoD insiders hope White’s inquiries will stem demands for a public inquiry. Critics counter that only a wide-ranging and transparent inquiry will guarantee that the true scale of the abuse comes to light.

The high court will hear claims that the alleged ill-treatment of Iraqis by British troops was systemic and was not conducted at the whim of rogue soldiers. The case involves multiple claims of ill-treatment contrary to human rights law, including hooding or blindfolding, allegations of being forced into prolonged stress positions in solitary confinement, and deprivation of sleep, water and food.

The lead claimant in the hearing is Ali Zaki Mousa, from Basra, who says he suffered months of beatings and other abuse during 12 months in the custody of British soldiers after being arrested in November 2006.

Mousa alleges in a witness statement that he was asleep at his home in Khamsemil in Basra, southern Iraq, when a door was blown in at about 2am and British troops rushed in to arrest him.

He claims the soldiers forced him into a stress position in which they stood on his knees and back and hit him with rifle butts. His 11-month-old son’s arm was stamped on and broken. He says he was taken to the brigade processing facility at Basra air station’s contingency operating base, where he was initially hooded and earmuffed, then goggled. He was then transported to another base where, on arrival, he was goggled and earmuffed, forced to undress in public and examined by a medic while naked.

Shiner said: “Nakedness is a big issue for us – the enforced nakedness, keeping them naked until they co-operate. You do not need to strip people naked to medically examine them, it cannot be justified.”

Mousa alleges he spent 36 days in solitary confinement in a tiny freezing cell with restricted bedding, food and water. Soldiers twice had sexual intercourse in front of him while pornographic movies were played loudly and pornographic magazines left in sight. Soldiers, he claims, exposed themselves, groped each other and masturbated in front of him.

Mousa was released in November 2007 and claims he has received no explanation for his detention.

The allegations coincide with the ongoing Baha Mousa inquiry, named after the 26-year-old from Basra who died after suffering 93 separate injuries while held in British custody in 2003.