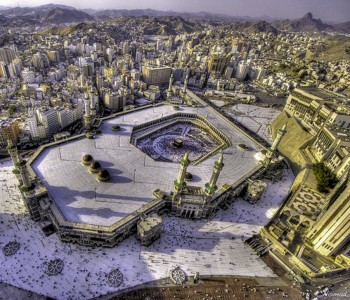 Home to Islam’s holiest cities of Mecca and Medina, Saudi Arabia regards itself as the guardian of Islam and is often closed off to foreigners. Even though it receives more than five million Muslim pilgrims a year, they are not allowed to travel within the country. Tourist visas are rarely issued and come with many restrictions but this is due to change as Saudi Arabia adopts a new strategy to tap into a niche market of conservative tourism.

Sunshine all year round, a medley of multi-coloured coral reefs beyond its sandy shores and the remains of an ancient desert city make an enticing tourist destination. But don’t pull out your bikini yet.

In Saudi Arabia there are no shorts, no mixing of unrelated men and women, and most significantly, no easy access into the country.

Home to Islam’s holiest cities of Mecca and Medina, Saudi Arabia regards itself as the guardian of Islam and is often closed off to foreigners. Even though it receives more than five million Muslim pilgrims a year, they are not allowed to travel within the country.

Tourist visas are rarely issued and come with many restrictions but this is due to change as Saudi Arabia adopts a new strategy to tap into a niche market of conservative tourism.

“It is about the kind of people that come to Saudi Arabia. It is an Islamic country that is home to Islam’s holiest sites so most people who come here come for Umra and Haj (pilgrimage),” said Abdulla al-Jehani, an official at the Saudi Commission for tourism and Antiquities.

For the past six years the tourism authorities focused their efforts on attracting more locals and Gulf nationals, who are allowed entry to Saudi Arabia without a visa.

“We are working on a new program… called “Umra Plus”, which means “Umra Plus tourism”,” Jehani said, adding that visiting pilgrims will be allowed to extend their stay in the kingdom to visit certain areas that were previously inaccessible to them.

With sites such as the ancient Nabatean city in Madaen Saleh; a 300-year old village of Rijal Alma; and the remains of a famous railway linking the Levant with the holy city of Medina, Saudi Arabia has a lot to offer.

The leading oil exporter says it hopes to raise its tourism contribution to non-oil GDP to 11 per cent within the next 20 years from its current 6.5 per cent as it seeks to diversify away from oil and provide jobs for its 18 million local population.

Perched on the edge of one of Saudi Arabia’s mountains in the Western region, 1,800 kilometres above sea level, the Taif water park resort has become a hub for conservative Gulf tourists who want to have a little fun in the sun while still adhering to their religious principles.

Wearing “Islamic” swimming trunks that cover the area from his belly button to his shins, Mishaal al-Azmi and his family merge well with their surroundings at the water park resort. His wife, clad in black and veiled, sits by his side.

“Abroad they bother us. They look at us with discrimination …because of our Islamic dress. Here we feel like we are free, no one bothers us. Everyone has the same values and traditions,” he said.

Taif, along with other mountaintop destinations in Saudi Arabia, have become alluring summer hot spots for conservative families from the Gulf who are looking to enjoy a holiday in keeping with Islamic values and traditions.

Saudi Arabia follows an austere version of Sunni Islam and religious police patrol the streets to ensure adherence to Islamic Sharia, including a ban on alcohol and often music.

Men must dress modestly and women cover their figures with a loose black garment, called the abaya, while restaurants segregate single men and families into separate sections.

“Saudi Arabia is a conservative country that has its values and principles, making it different than other places, and that may attract some people,” Jehani said.

“Among the principles for the tourism vision for Saudi Arabia is that the country is and will remain conservative, having its own values and principles, and no one will change that,” he added.

Many Saudis choose to travel abroad for a change of scenery and cooler weather, but nearly 1.4 million residents of other Gulf countries visit the kingdom during summer, Jehani said.

One Kuwaiti woman, shopping for herbs in an Al Taif bazaar, said she felt safe in Saudi Arabia, free from what she considered vulgar images seen when travelling abroad.

In order for Saudi Arabia to expand its tourism industry as it aims to capitalise on pilgrim visitors it must first attract investors to build more hotels and facilities which tend to be overcrowded during peak summer times.

Tourism’s development is hampered, however, by lack of interest among investors worried about weak returns, causing a shortage of hotels and other facilities.

“We do not find ourselves in a position to reach out more in terms of leisure tourism. We are not yet ready because of the standard of the industry in terms of the services, the ease of transport between cities in the kingdom. This all needs improvement,” Jehani said.

Even though Taif is one of the most popular summer destinations in the country, it only has 24 hotels and 450 serviced apartments while it receives about 2 million tourists a year, said Ahmad Aljuaid, a local tour guide.

Investors’ main concern is also to have a steady stream of tourist all year long, not just in the summer when more people pour into the country, said Abdulhamid al-Amry, member of the Saudi Economic Association.

Prices of lodging more than double during the summer and some hotels are only open for a few months a year.

Jehani believes that the “Umra Plus” program will be one solution that will help increase demand for tourism throughout the year, and contribute to eliminating the seasonality problem.