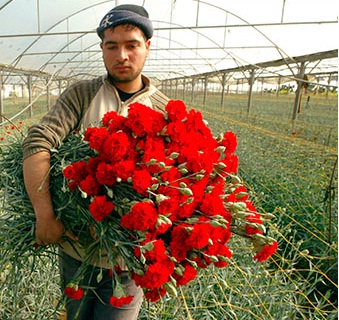 GAZA CITY – As the many colours of the fish and flowers slowly disappear from the Gaza landscape, the already grim prospects of the besieged residents begins to look even bleaker.

Fishing was a profession that used to keep thousands of fishermen and their families fed, but with Israel restricting the movements of fishermen, the catches are diminishing.

The same fate has overtaken the local flower farmers whose carnations were the delight of lovers and loved ones across Europe. Gaza used to export 75 million flowers to the EU duty free, before Israel embargoed all export.

There is little movement on the harbour during the day. Only a few fishing boats line the piers of the Gaza Strip.

“The fish are waiting, but the fishermen are being kept away,” says Zaki Al- Habeel, 33- year-old, father of seven. But just before sunset, he is ready to go fishing.

Al-Habeel is not allowed to go as far out as he used to. The fishermen have been set a limit of three miles. “But it is not really three full miles,” he says.

Often he is only a mile-and-a-half out before the Israeli navy fires at him. Al-Habeel and his brothers who are all fishermen risk injuries and damage to equipment every time they sail out.

Over the last decade, the Israeli navy has increasingly restricted Palestinian access to fishing zones along the Gaza beach, a UN report revealed last month.

The United Nations Office for the Coordination of Humanitarian Affairs (UNOCHA) compiled the report in cooperation with the World Food Programme (WFP).

The report said Palestinian fishermen have been barred from 85 percent of the naval territory to which they are entitled under the Oslo Agreement of 1993 between Israel and the PLO.

The report also focused on the buffer zone between Israel and Gaza where farmers are shot at for tilling their own lands. The report mentions 22 Palestinians killed and 146 wounded in such incidents since January 2009.

Yet the farmers and fishermen continue to access these prohibited areas, risking their life and limb.

As Al-Habeel says, he and his brothers “have to feed our families”. The last time, the Israeli navy shot out the fuel lines that are connected to his boat. Al-Habeel was just relieved they did not hit the small fuel tank, which is expensive and hard to find.

Last month, a 22-year-old fisherman was hospitalised with gunshot injuries, when he was perhaps a little more than two miles from the shore, other fishermen said.

The plight of the flower growers is just as wretched. Gaza-grown carnations, marketed under the brand name Coral, were popular all over Europe. But the situation has been going downhill for a while. In 2008, IPS had interviewed the carnation farmer Majed Hadaeid when his situation was quite desperate.

He had owned a 130-dunam (32-acre) farm yielding 16-17 million carnations a year in 30 different varieties and colours. This year he has lost his entire four-million-dollar business, and is burdened with debts amounting to 1.5 million dollars.

There is a faint hope though. The European Campaign to Break the Siege on Gaza announced in July that more than 9,000 delegates have applied to take a ‘freedom flotilla’ to Gaza. They are raising 100,000 euros to send an Irish ship this autumn.

Hadaeid hopes these aid boats from Europe will help the other farmers to survive. “We need the flotillas to keep up continuous pressure on Israel,” he said.

The fishermen nostalgically remember that day in August 2008 when the first flotilla arrived and members of the Free Gaza Movement joined them on their boats.

Al-Habeel says, “We were then able to get as far as six miles to fish.”

Everyone cheers the news of another flotilla. Fatima Subhi, a 49-year-old, schoolteacher said, “I welcome such delegations.”

The news has not all been positive though. In May this year, Israelis attacked the Turkish aid boat Mavi Marmara killing many people on board, including a Turkish-American passenger.

Turkish flags are seen at almost every street corner. A dish-seller is wearing a Turkish flag as a T-shirt. “They shed their blood for us, so we wear their flag over our hearts,” he says.

This summer, quite a few Turkish names have appeared on shop fronts. There is the Marmara Restaurant, the Istanbul Café and a ladies cosmetics shop simply called Istanbul.

Samir Al-Ejjel, who owns a shop selling carnations, has designed a bouquet he calls Erdogan in honour of the Turkish Prime Minister and has a Turkish flag flying outside his shop.

There was a report in the Israeli daily Maariv last week that thousands of activists from Western nations, as well as from Arab countries and even Israeli citizens, were preparing to send a flotilla of 30 ships.

Al-Habeel likes to think that the many different people who came by land or sea were just like the wide varieties of fish he used to catch.

As he waits hopefully for the flotillas to return, a younger fisherman talks about the “beautiful ladies” who were on board. “The Israelis do not dare to shoot at (European) women,” he says with a smile.

“Those flotillas gave us hope that rights can be protected — even under gunfire,” he added.

In the past, the fishermen and flower farmers have appealed to the EU for support. But with governments turning a deaf ear, they call on humanitarian activists from around the world. They hold on to the hope that by Christmas there will be more varieties of fish on the table here, and colourful Gaza carnations in the markets of Europe.