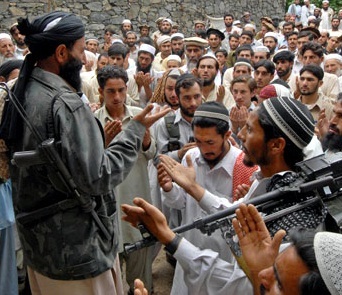 ISLAMABAD – United States President Barack Obama has pledged to begin withdrawing troops from Afghanistan in July 2011, and as a part of the initial outlines of this exit strategy the Taliban are for the first time in serious negotiations with the US.

The Pakistan military and Saudi Arabia are acting as go-betweens to facilitate the talks, a top Pakistani security official directly involved in the negotiation process has told Asia Times Online.

According to the official, the Pakistan army has already been in contact with top Taliban commanders, including Sirajuddin Haqqani. Information is then passed onto the Saudis, who in turn liaise with the Americans.

At this stage, no direct contact has been made with Taliban leader Mullah Omar, although he characteristically does not involve himself personally in such talks; they are handled by close associates.

The security official indicated, however, that unlike in the past nine years since the ouster of the Taliban and the US-led anti-insurgency operations in Afghanistan, Mullah Omar has shown a positive and flexible attitude.

The Taliban have previously insisted that all foreign troops – currently numbered at 150,000 – leave Afghanistan before any peace talks could begin. Separately, Afghan President Hamid Karzai has set up a High Peace Council to facilitate talks with Taliban leaders.

The initial talks have covered two main areas – the issue of about 60 Pakistanis in the US’s Guantanamo detention facility, and al-Qaeda.

Another element touched on in the talks is the American demand that it maintain a military presence in northern Afghanistan, while agreeing to give control of the south to the Taliban. The Taliban do not agree with this – they want a complete US withdrawal. This remains a point of major disagreement.

A key problem remains al-Qaeda – the US has no interest in any deals with the group and wants to specifically separate the Taliban from al-Qaeda.

The US has always insisted that any future Taliban government would have to expel al-Qaeda from Afghanistan. The Taliban agree on this, but want al-Qaeda to be given “honorable treatment”. It was the presence of Osama bin Laden and his al-Qaeda in Afghanistan that led the US to invade the country in late 2001 in retaliation for the September 11, 2001, attacks on the US.

On its part, al-Qaeda, armed with new allies, has its own agenda regardless of whether the Taliban make peace with Washington or continue their war.

Pakistan’s army chief, General Ashfaq Parvez Kiani, is fully cognizant of the sensitivities of the issue. The army does not want to shove anything under the rug, it aims to address every issue so that when more advanced negotiations begin with the Taliban, all irritants will have been resolved.

The Pakistani military has established a system of backchannel communications in which issues are discussed with Taliban leaders. Notes are then shared with Washington and Riyadh simultaneously. In this process, Saudi Arabia plays a central role.

In view of the al-Qaeda problem – which has the potential to derail any peace efforts – Kiani recently went to Riyadh and spent five days in discussions with King Abdullah, intelligence chief Prince Muqrin bin Abdul Aziz and other officials. The central theme was how to rehabilitate bin Laden and other Saudi citizens, beside arranging refugee status for other al-Qaeda members. Bin Laden was stripped of his Saudi citizenship in the 1990s.

The director general of Pakistan’s Inter-Services Intelligence, Lieutenant General Ahmad Shuja Pasha, was sent to Washington regarding a proposal for al-Qaeda to shift from Afghanistan to Saudi Arabia.

Al-Qaeda’s struggle is entering a decisive phase, one in which it does not necessarily need the protection and support of the Taliban – unlike in 2002, when al-Qaeda was badly beaten as a result of US attacks and reduced to a few thousand members in a rag-tag militia. It had also lost a number of leaders in the “war on terror”, either killed or arrested by Pakistan from 2002 onwards.

Since then, the organization has revived its fortunes, from the Caucasus to the Pakistani tribal areas, from India to Iraq and Somalia.

In Afghanistan, the southwest is controlled by Mullah Omar’s Kandahari clan, while the southeast is completely under the command of pro-al-Qaeda commanders such as Qari Ziaur Rahman and Sirajuddin Haqqani. Their forces include thousands of non-Pashtun linked with the anti-Iran Jundallah and the powerful 313 Brigade of Ilyas Kashmiri. They also draw support from the Laskhar-e-Jhangvi and last but not least the Pashtun Tehrik-e-Taliban Pakistan (Pakistan Taliban).

Recently, al-Qaeda launched Chechen and Uzbek fighters from the Pakistani tribal areas back into the Central Asian republics and Russia. In the latest attack, on Thursday, 18 people were killed and more than a hundred injured in a suicide bombing in the North Ossetian capital of Vladikavkaz.

Under the command structure of Laskhar al-Zil, a shadowy army comprising various al-Qaeda-linked groups, al-Qaeda is reasserting itself in Iraq, Yemen and Somalia, and at the same time planning to open up a new and constant front in India.

According to ATol contacts in the militant camp, al-Qaeda has no objection if the Taliban strike a deal with Washington that paves the way for an American withdrawal from Afghanistan. Al-Qaeda would simply leave Afghanistan and jack up its operations in Pakistan and India. Al-Qaeda has already escalated attacks in Pakistan to create space for itself.

In the past few weeks, al-Qaeda-linked groups like Tariq Afridi have struck deals with local warlord Mangal Bagh to target major cities in restive Khyber Pakhtoonkhwa province, including Kohat and the capital Peshawar.

Commander Badr Mansoor has been tasked to increase activities in cities near the tribal areas, including Dera Ismail Khan, Bannu and Lucky Marwat. Sabir Mehsud of the Lashkar-e-Jhangvi has been asked to escalate attacks in the main urban centers of Islamabad, Lahore, Karachi and Quetta, while commander Bin Yameen has been ordered to mobilize cadre in the Swat Valley.

While the Taliban-Washington dialogue process is in its early stage, al-Qaeda is well on the way to setting up an infrastructure to prove that it – not any state, army or the Taliban – is the real player of the upcoming game.