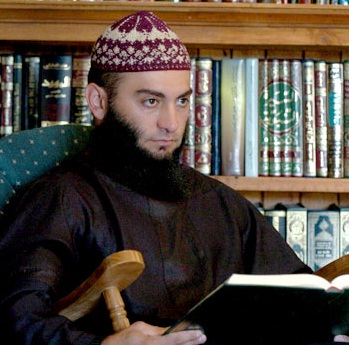 MuslimVillage.com EXCLUSIVE – Sheikh Feiz Mohammad has released a statement in response to media reports claiming that he was calling for the beheading of the Islamophobic Dutch politician Geert Wilders’ labeling them as “sensationalist”, “out of context” and based on “limited knowledge”.

In the press release, exclusively obtained by MuslimVillage.com, Sheikh Feiz defended himself by explaining the context behind his recorded comments and dismissed the media reports as serving “only to further cause division between myself and the community”.

The Sheikh also stated that the recordings were made while he was overseas in 2008 in response to the release of Wilders’ controversial and universally condemned Islamic hate documentary “Fitna’ and not in response to Wilders’ recent appearance on the SBS Dateline program where he labeled Islam as having a “retarded culture”.

In his statement Sheikh Feiz said “these comments were made online to a specific audience whereby I was addressing a religious question regarding treason in Islam and the repercussions under Islamic Shariah law”.

” It must be noted that in the context of this topic, any capital punishment in Islam can only exist when there is a caliphate or a nation run by Islamic Leaders. This was clearly stated in my comments and in the available recording.”

“Although capital punishment still exists in modern western societies such as the USA, it is illegal in Australia. We do not have an Islamic caliphate in Australia and my comments are purely based on previous Islamic history and law”.

Sheikh Feiz also called upon the Australian government to condemn Wilders who is planning to visit Australia in the near future as part of a his desire to establish a global Islamophobic Anti-Islam political movement.

He also pledged his admiration for Australia, stating “Australia and its people are a great nation. The success of multiculturism (sic) in this country is a great example for the world to envy and follow”.

The Sheikh’s release further went on to state that he was against violence of any nature.

“I personally do not condone violence of any sort whether it be physical or in the form of verbal abuse as is the case with Geert Wilders and his violent and divisive opinions”.

As reported by MuslimVillage.com yesterday, leaders of Australia’s Muslim community are deeply concerned about the ramifications and potential social unrest that may arise from a planned visit to Australian by Geert Wilders.

It is understood that once a new government is finally formed, they will seek an urgent meeting with the Federal Attorney General to lobby against granting Wilders entry into Australia.

A full copy of Sheikh Feiz Mohammad’s press release can be read here: