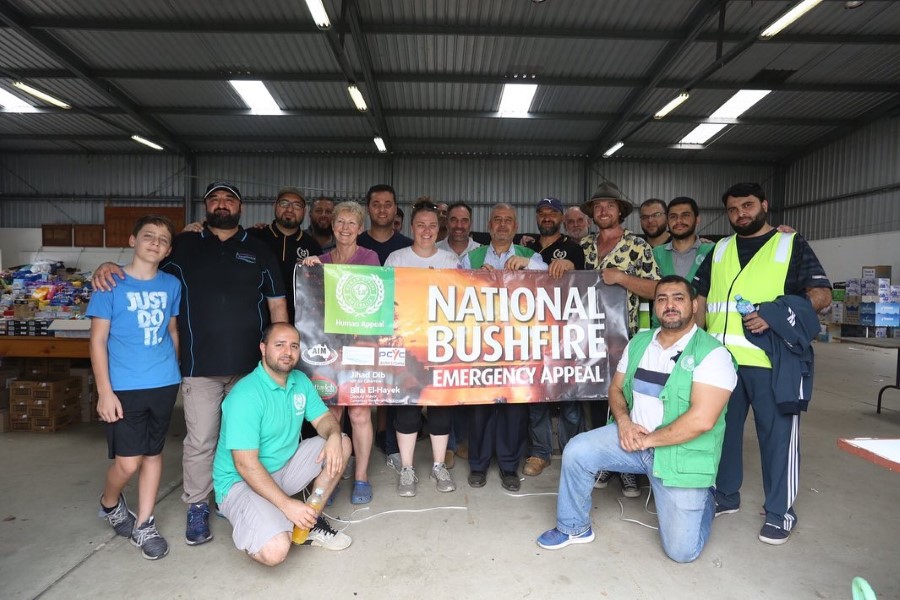 Human Appeal Australia (HAA) through its state offices and along with community organisations has been organising a nationwide bushfire relief since the fires started in November 2019.

Early Saturday morning 4 of January 2020 HAA with the assistance of the Australian Islamic Centre, MFB and community distributed the food and essentials to fire-affected regions in rural Vic. The caravan of five truck filled with donations embarked on its journey. After feeding the firefighters, the volunteers were escorted by the Melbourne Fire Brigade to different areas to offload the items. They travelled, along with other volunteers, more than four hours to distribute the supplies to victims. When they arrived in Johnsonville, the ladies cooked breakfast for 150 firefighters.

“I extend the thanks from the fire affected areas,” Rodney Baylis, a Johnsonville firefighter, is heard telling the group in a video posted on Facebook. “I just been on the phone to the captain down there and he nearly broke into tears when I told him what we are bringing in for them today.”

On Wednesday, 8 of January 2020, three trucks and two vans were delivered to the town’s bushfire relief centres at the Cobargo Showground and Braidwood RFS containing donations for those recovering from the blaze that devastated their region.

Along with these supplies, members of HAA, Jihad Dib, MP, Clr. Bilal El-Hayek – Deputy Mayor of the City of Canterbury Bankstown, Lighthouse Community Support, the Australian Islamic Mission (AIM) and AIM Youth group travelled to the towns to provide support and cook food for people at the evacuation centres. About 35 people from the organisations travelled with supplies and support to Cobargo and Braidwood and had been made to feel very welcomed by locals.

Bashar Al-Jamal HAA’s director noted that these trips are just the beginning as more phases of help will follow, especially for schools and farmers in the affected areas. Meanwhile, Amin El-Bureeny, Head of HAA Community Care thanked the generous donors and community for sending their gifts to aid the Bushfire affected communities.

Omar Al-Jamal from HAA, who also runs AIM Youth group, said his community had been watching what had been occurring on the Far South Coast over the past week so decided they wanted to do something “to stand with our fellow Australians”. He said his community gathered the donations for the trucks according to what they had been told was needed in the area. “Your fellow Australian Muslim brothers and sisters and supporters in Sydney are thinking of you guys and will be supporting you no matter what,” he said.

Australia is being ravaged by the worst wildfires seen in decades. A total of 27 people have died nationwide, and in the state of New South Wales (NSW) alone, more than 2,000 homes have been destroyed or damaged.

HAA is reaching out to our generous community to help ease the suffering of our fellow Australians who are left in evacuation centres after losing their homes to fire.

The most effective and efficient way to help is through cash donations. Clothing, food and other goods are not required. If you haven’t donated, you can still do so today http://bit.ly/2QTHjPd Human Appeal Australia would like to extend warm thanks to the generous community for being with us on the road to goodness.