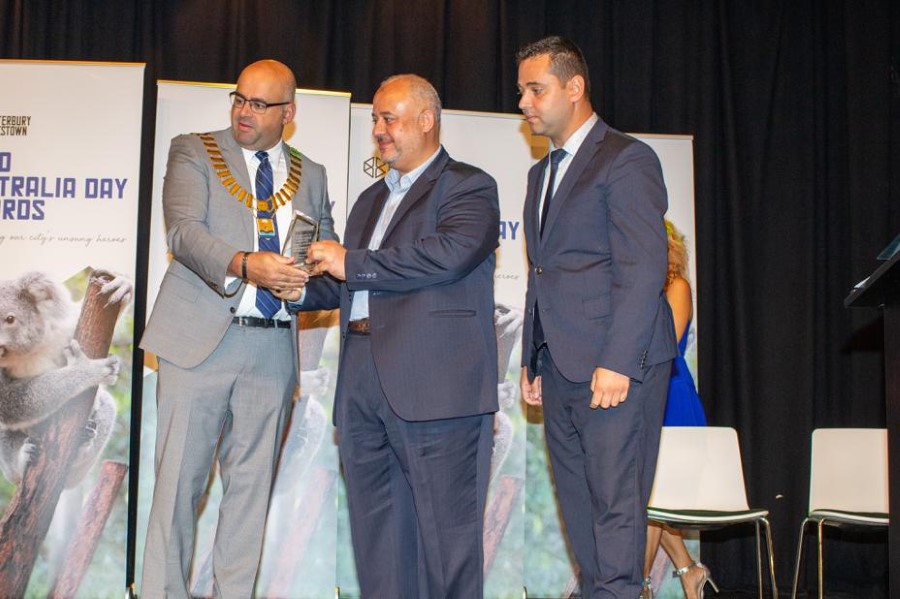 The accomplishments of local individuals and businesses throughout the City of Canterbury-Bankstown were recognised at the Council’s Australia Day Awards Ceremony on Sunday 26 of January 2020.

Every year on Australia Day, the Council recognises outstanding contributions and services to the Canterbury-Bankstown and its local communities and is administered through a nomination program that is assessed by a local committee and Councillors.

Mayor Khal Asfour and Deputy Mayor Bilal El-Hayek presented the Awards as part of the Australia Day celebrations at the Council Chambers at Bankstown.

“The awards are an integral part of our Australia Day celebrations, as we honour and shine a light on the contributions which have helped make Canterbury-Bankstown such a great place to live in, work in, visit and enjoy… These are people who go out of their way to help others and don’t want anything in return. Their determination is inspiring, and they deserve recognition.” said Mayor Khal Asfour in his opening speech. He continued: “The awards are about recognising unsung heroes.”

The Council recognised Human Appeal Australia (HAA) as Organisation of the Year, for their great unwavering mission to strengthen humanity’s fight against poverty and social injustice for the last 28 years, alleviating hardships of the poor and needy across the globe and in Australia.

Through the provision of immediate relief and the establishment of self-sustaining development programs, HAA aims to invest in real, effective solutions. Supporting local community initiatives, like Wise-Up Program, No Excuse for Abuse March, Ramadan iftar Dinners for local schools and organisations, emergency campaigns for the benefit of the farmers stricken by drought and fundraising projects for Bankstown-Lidcombe Hospital.

The Director of the Human Appeal Australia (HAA), Bashar Al-Jamal, was also nominated as finalist Citizen of the Year at the 2020 Canterbury-Bankstown Australia Day Awards, for his remarkable and tireless work for the benefit of those in need, and for his service to the community.

In 1991 Mr Al-Jamal established HAA as Australia’s leading charity organisation as he recognised a fundamental need of Australian Muslims to fulfil their obligations for charity.

Human Appeal Australia rapidly grew from a single office in Sydney, and within 28 years, expanded its presence to Melbourne, Adelaide, Brisbane and Perth, with total donations exceeding $200 million dollars.

By establishing a firm and loyal grassroots relationships with local, national and international partners, Human Appeal Australia is able to access some of the hard to reach places at the most vulnerable of times.