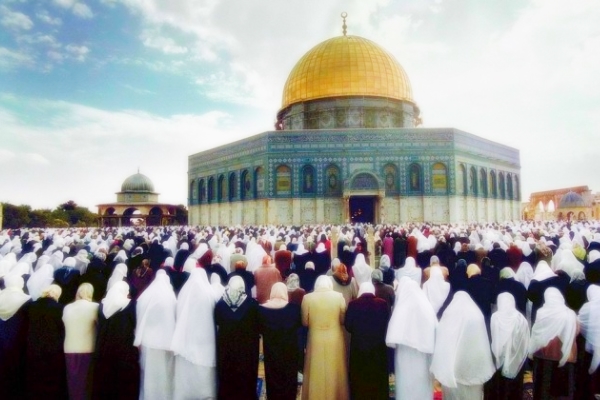 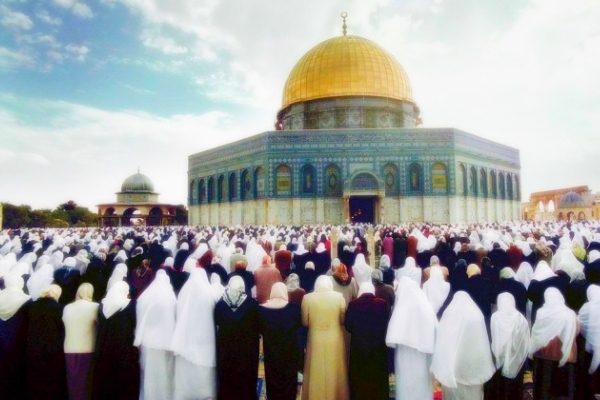 The greatest gift that Allah bestowed on the Muslim Ummah during the Mi’raj, or Ascent of the Prophet Muhammad (salla Allahu alayhi wa sallam) is the 5 daily prayers. It is as if Allah Most High, out of His great generosity, wanted the rest of the Ummah to have their own mi’raj and so made our prayer our mi’raj. ‘The Prayer is the Ascension of the Believer’ is a famous Islamic teaching, attributed to the Prophet Muhammad (peace be upon him). I want to share my thoughts on some of the aspects that make this prayer like the mi’raj. 1) The Ascent of the Messenger of Allah took him to such a nearness to Allah, that the archangel Gabriel, made of light, said that if he accompanied him to that last station he would burn up. Now, this nearness is not in a physical sense, Exalted is Allah above such a thing. The great Imam Ibn Daqiq al-‘Eid, considered the greatest scholar and mujaddid of the Seventh Islamic century, was asked the following question: What is the meaning of the Prophet’s saying, (peace be upon him), ‘Do not say I am better than Jonah son of Amittai’ despite the fact that he (peace be upon him) said, ‘I am the master of the children of Adam.’ He said to his questioners, ‘I will not tell you until you pay off the debt of this friend of mine,’ for he had a friend who had a debt, and they paid it off. So he said,

What is meant by that is: My nearness to Allah (most high) during my ascent to the Tree of the Uttermost End, nay to the Divine Throne, is like the nearness of Jonah when he was in three darknesses, there is no superiority between us in that.

In other words, when Jonah prayed to Allah from within the belly of a whale in the dark depths of the ocean, he was as near to Allah as the Prophet Muhammad (peace be upon him) when he was beyond the Seventh Heaven, where the lights were so powerful that they would burn Gabriel. There is a tradition: that an angel came from above the seven heavens, and one from below the seven earths, an angel from the far west and an angel from the far east, and they all said: ‘I came from where Allah is.’ Thus just as the Ascension took the Messenger (peace be upon him) to the greatest nearness to Allah (most high), so does our Prayer, for the Messenger (peace be upon him) told us, ‘The nearest a servant of Allah comes to his Lord is when he is prostrating himself,’ that is, during the sujood, ‘so make supplications in that state.’ 2) It is said that when the Messenger of Allah ascended into the Divine Presence he said, attahiyyatu lillahi, wassalawatu waltayyibat, ‘Greetings to Allah, and prayers and all good things.’ To this Allah replied, assalamu alayka ayyuhal nabi, wa rahmatullahi wa barakatuhu, ‘Peace be upon you, O Prophet, and the mercy and blessings of Allah’ The Prophet said, assalamu alayna wa ‘ala ibaad Allah as-saliheen, ‘Peace be upon us, and upon Allah’s righteous servants.’ We speak these very words during the time we sit up after every two units of prayer. It is said that the rest was also spoken during the Ascension: that the Messenger of Allah said, “I bear witness that there is no god but Allah” and that Allah Most High replied, “And I bear witness that Muhammad is the Messenger of Allah.” Thus in our own prayer, we repeat the dialogue between Allah and His Messenger during the Ascension. 3) In this ascension of ours, we have our own dialogue with Allah (most high). The Prophet’s companion Abu Hurayra repeated three times that our Prayer is deficient (or not even accepted) if we do not personally say the Fatiha during it, even if the Imam says it, because the Messenger of Allah said,

Thus we have our own dialogue with Allah (most high) during our own Ascension, the Prayer. Now the Qur’an commands us to recite the Qur’an in the form of tarteel, or to pause between the verses, and the great scholar Ahmad ibn Idris emphasizes the importance of doing this during the Fatiha in the Prayer, saying

Stopping at the ends of the verses is for the sake of (bringing to mind) his Lord’s reply, and that is because for the servant to start saying the next part before his Master’s reply to his first speech is ill-mannered.

So when reciting the Fatiha in our Prayer we must be conscious of Allah’s response to what we are saying, and that we are engaging in two-way speech with the Divine. 4) Our ascension, our journey to Allah, begins with the first takbir, when we raise our hands above our shoulders in a movement that many scholars have likened to that of the throwing off of a garb. As if you are saying, Allahu Akbar, God is Greater than this world, which I throw behind me; God is greater than all worries and distractions, which I throw behind me; God is greater than the ego that does not like to obey commands or to prostrate itself, and so I throw it behind me; God is greater than myself, so I leave it behind me. And thus begins your journey, your Ascension in which you get as near as possible to Allah. Then, you return to the world, and you say to those around you, whether human or angel, what every traveler says upon his arrival, you greet them with Assalamu alaykum wa rahmatullahi wa barakatuhu, the Islamic greeting formula: Peace be upon you, and Allah’s mercy and blessings. Thus I end with a translation from The Precious Necklace in Arranging the Jewels of the Teachings of Ahmad ibn Idris:

The Takbirat al-Ihram for the Prayer (The commencement of the Prayer by saying Allahu Akbar): It is that he who is praying forgets everything except Allah and swims in the Kibriya’ (Majestic Exaltedness) and Greatness (of Allah). Then every time he reaches an end of Kibriya, Allah is even greater in exaltedness above that, and so he renews the takbir in the Ruku’ and says: God is Greater, meaning Greater than the end I have reached while swimming in his Kibriya; and it is like that until the middle of prayer. At that point, your inability to swim in a creak from the oceans of his Kibriya is verified, so you return (to the beginning). Then at the end of the prayer you return to Creation and so you say: ‘Peace be upon you and Allah’s mercy,’ for the greeting is not said except by someone returning from a journey. As for someone who has been present, for him to turn to his right and say ‘Peace be upon you’ and then turn to his left and say ‘Peace be upon you,’ that would be considered insanity, because that is not required of him by the law.

Note on the divine name al-Mutakabbir, which is derived from the word Kibriya:

“The Real called himself al-Mutakabbir because He increases in greatness in the heart of His slave bit by bit, every time a veil is removed from him, not because the Real Himself increases in greatness, for He cannot increase or decrease, but the increase and decrease are for the slave, depending on his nearness or distance from the presence of Allah. It it similar to the slave’s witnessing of his shadow with a lamp: the closer he gets to it, the larger that his shadow and the light of the lamp increase in his sight, and the further away he walks from it, the smaller it becomes.”