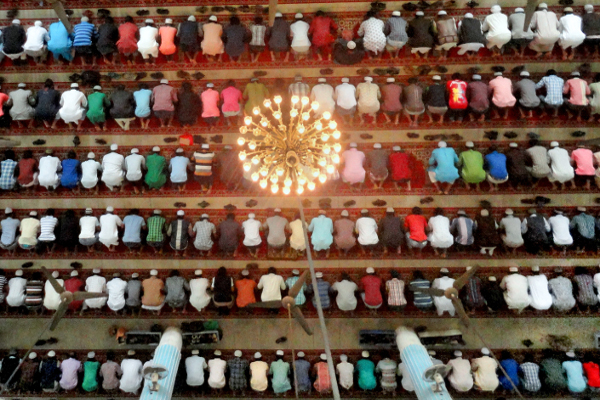 Social training is one of the most important principles of Islam. And the first lesson for the Muslim starts with praying in congregation. This is the most important deed that strengthens the feeling of unity and togetherness within the society of Islam, which is itself based on the oneness of Allah. A place in which the prayer is prayed in congregation is a place in which the spirit and societal structure of Islam has began to be perceived.

Islam commands the believers to live within a community, to help and support each other in all matters, and to struggle as if they are one rank together and united in the path of Allah.

“Allah loves those who fight in His Way in ranks like wellbuilt walls.” (As Saff, 61:4)

The Messenger of Allah (ﷺ) has said:

“…I desire that you be a community and that you avoid separation and division with an intensity. This is because Satan is with those who live on their own. But he stays far from people who live together even if they are only two (people). The person who wishes to be in the midst of Paradise should continue to pray in congregation…” (Tirmidhi, Fiten, 7/2165).

During each cycle of the prayer, we repeat the verse “You alone do we worship and from You alone do we seek help.” (Fatiha, 1:4), thereby demonstrating to our Lord, at least 40 times a day, that we are part of a community.

The first thing that our Prophet did when he entered the cities of Quba and Madina was to build a mosque. He himself helped to build the mosque thereby laying the foundations of the brotherhood of Islam.

Our forefathers followed this practice of the Prophet. When they built cities they first of all built magnificent mosques at the centre and then developed the city around this mosque which acted as a circle of light.

Consequently to perform the prayer in congregation is most suited to the purpose of Islam and is a command of Allah.

The Prophet (ﷺ) has said:

“Allah Most High is as pleased and happy with the Muslim who frequents the mosque for both remembrance and prayer as a family who is away from home would be pleased when their relatives return.” (Ibn-i Majah, Masajid, 19).

“Whoever befriends the mosque, Allah will befriend him.” (Suyuti, II, 143).

“Whoever hears the call for prayer and does not go to the mosque, means that he neither desires good nor has no good been willed for him.” (Bayhaki, AS Sunan al Kubra, III, 57).

Allah’s Messenger (ﷺ) made no concessions for the one who was neglectful of praying in congregation. One day he said:

“Whoever hears the call to prayer and does not go to the mosque even though he has no excuse to prevent him, will not have his solitary prayer accepted (as a perfect prayer). The Blessed Companions asked him:

“(O Messenger of Allah) What is the excuse?”

To abandon praying in congregation will lead to the breaking up of the Islamic community. Almighty Allah condemns the one who splits the community as follows:

“As for those who divide up their religion and form into sects, you have nothing whatsoever to do with them.” (An’am 6:159)