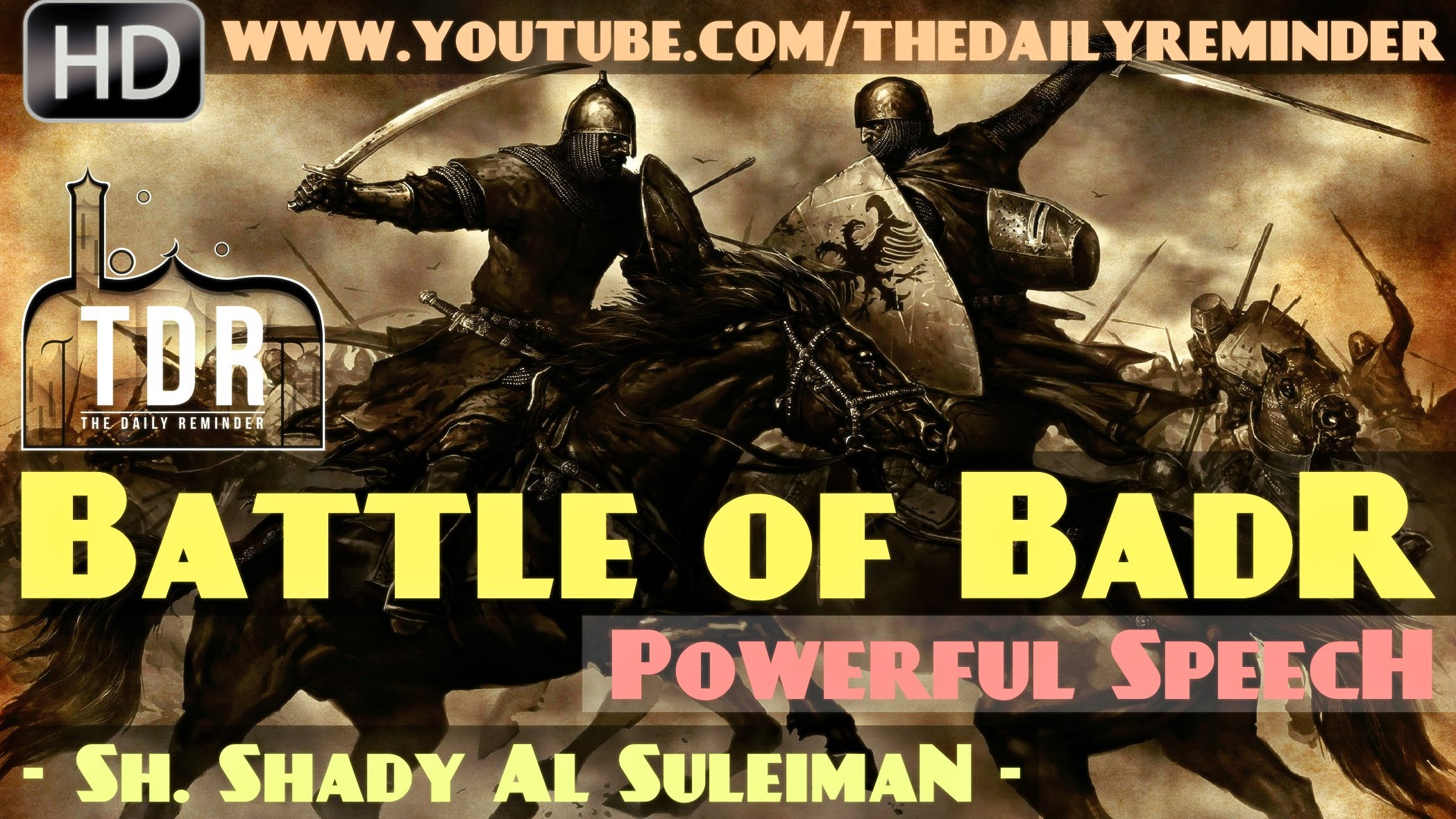 The seventeenth Ramadan (today or tomorrow depending on where you are) is a reminder of the battle of Badr — the first major battle fought against the enemies of Islam. This decisive battle laid the foundation for the Islamic State and made Muslims a force to reckon with in the Arabian Peninsula.  A very important fact for all people to understand is that Islam is the religion of peace and that it is neither imposed nor forced on anyone, as clearly stated in the Holy Quran itself. It is a universal fact that history does not record one single episode in which the Prophet (peace be upon him) compelled any human being to convert to Islam. His character and conduct enticed people towards Islam.

This peaceful attitude of Islam is quite evident in that Muslims were ordered not to fight unless they were attacked, as Allah says: “Fight in the cause of Allah those who fight you but do not transgress limits, for Allah loveth not transgressor”. (Al Baqarah 190).

It is clear from this verse that there is neither compulsion nor transgression in Islam except against the oppressors who harass and fight the Muslims. In other words, Muslims are ordered to fight to defend themselves, but they should not be transgressors, for trans­gressors are hated by Allah. We have seen many so-called international writers taking the verses from the Holy Quran which talks of fighting but intentionally avoid the preceding and the following verses, which give the context of the entire clause.

When talking about the great battles of Islam, we should look deep into them in the light of this fact; namely that Muslims were not transgressors; they only fought against the oppressors.

The Battle of Badr took place on Ramadan 17, in the second year after the emigration of the Prophet (ﷺ) from Makkah to Madinah. The Mus­lims were able to vanquish their enemies in this battle in which Allah separated truth from falsehood and it became known as the Battle of Separation. This established the power of the Muslims.

Badr is the name of the spot at which the battle took place, and is situated in the south-west of Madinah, and was a meeting point between Madinah Road and the road used by the caravans coming from Syria to Makkah. It is a plain that is bordered by hills and mountains and is known for the abundance of date palms and water wells.  The majority of its people now belong to the Harb tribe.

During the Prophet’s time, Badr was a watering station at which the caravans used to get water for their camels, and there used to be a market there once a year.  Historians say the cause of the battle was that when the Quraish of Makkah were returning from Syria, the Prophet (ﷺ) sent two of his companions to get news of them. They reached a place called Alhawra and waited there until Abu Sufyan ibn Harb, leader of the caravan, arrived, after which the two scouts hurried back to Madinah and informed the Prophet (ﷺ).

The Prophet (ﷺ) is reported to have told his followers to go after the caravan, but no one was compelled to do so. He then departed with a contingent of just over 300 men (313-317), and they had between them only two horses and 70 camels.

The man who was left behind in Ma­dinah to lead the prayers was Ibn Umm Maktum, and the army consisted of both immigrants (Muhajirin) numbering 86 and supporters (Ansar) of the Awas and Khaz­raj tribes. The Prophet (ﷺ) divided the army into two detachments: the Muhajirin led by Ali ibn Abi Talib and the supporters under the leadership of Saad ibn Muadh.

The contingent set off from Madinah until they reached a place called Safra, from where the Prophet (ﷺ) sent two of his companions out to scout around and bring him intelligence reports.

Abu Sufyan, the leader of the Quraish trading caravan, changed course and headed for the coast and thence to Makkah which the caravan reached safety. But be­fore that he had already sent a messenger to Makkah to ask for help to rescue the car­avan. The Quraish prepared a contingent of 1,300 warriors, which had 100 horses and an unknown number of camels. Commanding their army was Aba Jahl.

At Juhfa, they received a new message from Abu Sufyan telling them that the car­avan was safe and that they should return to base. But when the men were just about to start the return journey, Abu Jahl, in his ar­rogance, told them not to turn around. He encouraged and exhorted them to war, and except for 300 members of the Bani Zahrah tribe, the rest of the contingent obeyed his command. The 1,000 men marched on, but when the Banu Hashim also wanted to return to Makkah, Abu Jahl refused them permission. The men reached a hillock situated at Upper Adwa, bordering the Badr Val­ley.

The Prophet (ﷺ) learnt that the Quraish army was on its way, and he understood the gravity of the situation. He realized that a confrontation was inevitable. But the important thing was that it all depended on the attitude of the Ansar because they had promised him they would protect him as long as he was in Madinah and there was no reference to any place outside it.

But the Ansar, under the command of Saad ibn Muadh, were men of integrity and loyalty, for, when the Prophet (ﷺ) asked them of their opinion, they made an apt reply and told him that he should fight the nonbelievers and Allah would be with them. Whereupon the Prophet (ﷺ) broke the news that Allah had promised victory for them. Thus, the Muslim army moved and hurried to the well of Badr, to be the first to arrive. When they reached there, Habab ibn Al Mundhir advised the Prophet (ﷺ) that they should fill all the wells except one, near which a trough should be built, and used only by the Muslims for their drinking water. The Prophet (ﷺ) accepted the advice and approved the plan.

The numerically superior legion of the nonbelievers arrived, and when the Prophet (ﷺ) saw the huge army he raised his hands in supplication to Allah and be­seeched His support and salvation. Thereupon, Allah sent him a revelation to the effect that He was with them, and that He would fill the nonbelievers’ hearts with fear and trepidation. Allah made it known to the Prophet (ﷺ) that He was sending down His angels to help him. A few men of the Quraish, among them Hakim ibn Huzam and Utbah ibn Rabiah, thought of returning home, but Abu Jahl, incited the nonbelievers to fight. Then the fighting started, and within a short time it began to intensify.

Three of the Quraish noblemen, Utbah ibn Rabiah, his brother Shaibah, and Al­ Walid ibn Utbah, asked for a sword contest, and suffered defeat at the swords of Hamza, Ali, and Ubaydah ibn Al-Harith. This was a bad omen for the nonbelievers. They attacked the Muslims ferociously, but the Muslims were steadfast and resisted them.

In a narration by Ibn Ishaq, it is said that the Prophet (ﷺ) told Abu Bakr that Archangel Jibreel had taken the reins of his horse and led him. Thereupon, the Prophet (ﷺ) ordered a counter-attack against the nonbelievers. He advised his men that whoever fought sincerely and died in the course of duty would be admitted to Paradise.

The Muslims fought hard and the angels came to their aid, and that was when signs of failure and tension in the ranks of the enemy began to show. Abu Jahl and Umayyah ibn Khalaf were among the first casualties.

Then followed Al-As ibn Al­Mughira, Abu Albahtari ibn Hisham, and others among the Quraish stalwarts — sev­enty in all. Another 70 were taken prisoner by the Muslims, among them Abbas, the Prophet’s uncle (who had gone to the battlefield halfheartedly), Utbah ibn Abi Muit, Nadhar ibn Al-Harith, their standard-bearer.