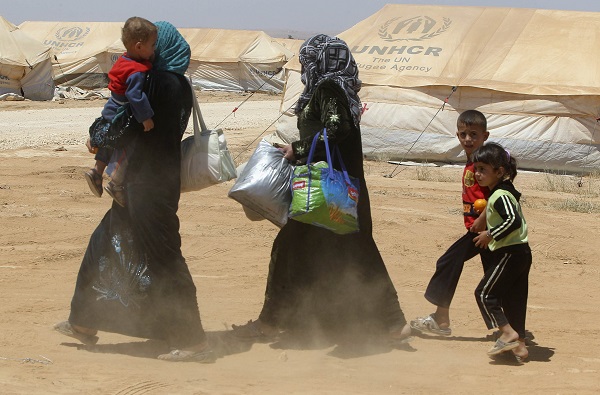 Syrian refugees arrive at the Al Zaatri refugee camp in the Jordanian city of Mafraq, near the border with Syria August 8, 2012. The Al Zaatri camp is one of many set up along the 86 km (53 mile) border between Jordan and Syria under the management of the United Nations refugee agency (UNHCR) and with the help of local charity groups. REUTERS/Ali Jarekji (JORDAN - Tags: POLITICS CIVIL UNREST)

BRUSSELS – The UN has said it will have to “prioritise” aid programmes for the millions of Syrians stricken by war as international donors pledged an estimated $4.4bn in humanitarian assistance for Syria – far short of the $6bn required to meet the basic needs of more than 13 million refugees.

Donors and government officials gathered in Brussels on Wednesday to pledge funds to support more than 5.6 million Syrian refugees and to provide humanitarian support to millions more, but pledges fell $1.5bn short at a conference overshadowed by the growing proxy war in Syria and the US, French and UK’s response earlier this month to a suspected chemical weapons attack.

Mark Lowcock, the UN under-secretary-general for humanitarian affairs told a news conference: “My best guess and my best forecast is that by the end of the day we will have heard pledges for 2018 of $4.4bn. I want particularly to thank the EU, Germany and the United Kingdom who have made exceptionally large pledged.”

Lowcock said the pledges were a “good start” and welcomed a 1bn euro German pledge and an additional £250m from the UK.

But, he admitted that the US had yet to make a pledge for 2018 and that the figure was nearly $2bn lower than at this point at last year’s Syria conference.

He also warned that the shortfall in funding would result in “prioritisation” on the ground, where UN aid workers would have to “focus on the most vulnerable” and cut back on wider services.

This came after the head of the UN relief agency in the Middle East told MEE that warned of a repeat of the 2015 refugee crisis if international donors did not live up to their commitments.

Amid Awad, head of the UN High Commissioner for Refugees (UNHCR) in the Middle East said that any drop in funding would critically impact refugees and could prompt a “repeat of 2015 and more.”

He said that “Idlib is the big new challenge – 2.5 million people… there are women, children, civilians, and this is looming up there”.

More than  6.1 million people are now internally displaced in Syria, more than 5.6 millionhave fled the country and 13 million including six million children are in need of aid, according to the UN.

More than 700,000 people have been forced from their homes since the start of this year, as the Assad government steps up its offensive against rebel forces, intensifying the humanitarian crisis.

Neither the Syrian government nor the official opposition attended the conference.

In a joint statement, a coalition of NGO said the “conference did not go nearly far enough to provide adequate support to the millions of Syrians in need of assistance and who are left facing an uncertain future”.

The joint statement from CARE, IRC, Mercy Corps, NRC, Save the Children, Oxfam and other NGOs, added: “The promises made in Brussels, whilst welcome, will not keep a child from having to work in Lebanon, nor send every child to school in Jordan unless there are robust mechanisms to ensure that commitments are translated to action.”

Earlier the conference heard from Saad Harri, the Lebanese prime minister, who faces election in two weeks. He said the plight of Syrian refugees in the region is getting worse, and will only detotiarion with reduced international funding for aid.

“The bitter truth is that despite all our combined efforts conditions have deteriorated. Lebanon continues to be a big refugee camp,” he said.

The pledges in Brussels came as Syrian NGOs on the sidelines of the conference renewed calls on the UN and EU not to give up on civil society, and called the establishment of a Special Tribunal for war crimes in Syria. They also called for the “protection” of civilians in northern Syria, where fighting in Idlib and Afrin, has created hundreds of thousands of newly displaced people.

Hivin Kako, the executive director of the Bihar Relief Organisation, a Syrian NGO providing aid in northern Syria, called for international donors to work harder to meet the $6bn target, but warned that a lack of discussion of the situation in northern Syria, where Turkish forces are engaged in military action, risked ignoring the reality of the situation on the ground.

She told Middle East Eye: “We cannot separate humanitarian aid from the political track. The geographical advances of the regime show just how much Assad has gained in the north, and that is changing the game.

“That power shift is going to push donors towards development. It’s a tricky situation, but it seems the big donors are just avoiding talking about it.”

The EU, along with many other major donors, refuses to fund serious reconstruction, rather than emergency aid, in Syria until there is a meaningful peace process in Geneva.

Federica Mogherini, the EU’s foreign affairs representative, said it was “not realistic for any international institutions to give money to Assad”.

“We need a political path to try and avoid Syria becoming a black hole”. Mogherini also called on Russia, Iran and Turkey to halt military action in Syria.

Staffan De Mistura, the UN special envoy on Syria, added that while he had not been “expecting a breakthrough” on the political front at the conference, that he was pleased “we did not have confrontation in the room”.