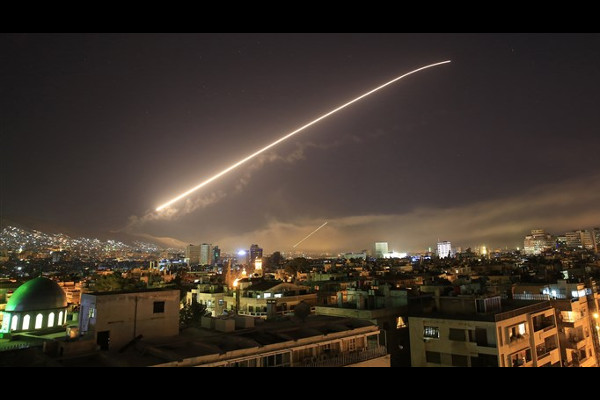 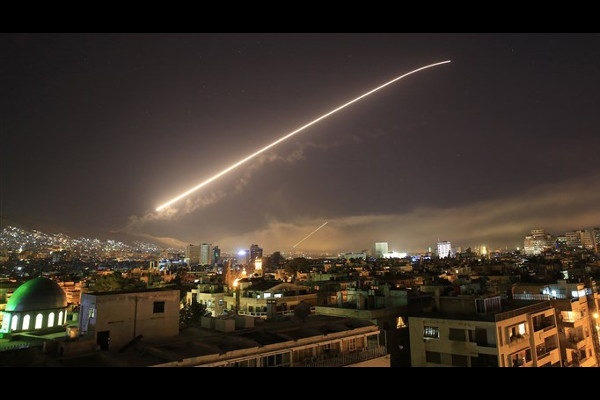 ISTANBUL — On Syrian state TV, President Bashar al-Assad strolls into his office carrying a briefcase around 9 a.m. Saturday, only hours after Western missiles rained down on suspected chemical weapons sites in Damascus and Homs.

They labeled the video on Twitter, “a morning of steadfastness.”

But with the Middle East once again skirting the brink of an all out war between world powers, the region is anything but unwavering, with mounting fears that the attacks could cause dangerous ripple effects.

Analysts are urging restraint, saying the consequences of escalation could be disastrous.

“A large part of the reason that Syria is in ruins today is because nearly all actors have pursued military solutions instead of diplomacy aimed at halting the bloodshed,” said Reza Marashi, the research director at the National Iranian American Council. “An eye for an eye approach will not bring justice or peace to Syria.”

The U.S., Great Britain and France launched the assault in response to alleged chemical attacks against civilians in Syria that killed dozens of people on April 7.

The U.S. said strikes could continue if the Syrian government continues to use chemical weapons, “they will be held accountable.”

Russia — allied with Assad and Iran in Syria — responded by condemning the attacks, but did not repeat threats of retaliation made earlier this week.

“The current escalation around Syria is destructive for the entire system of international relations,” said Russian President Vladimir Putin in a statement. He also called for an emergency U.N. Security Council meeting to discuss the “aggressive actions.”

With nearly every country in the Middle East having a stake in the Syrian conflict, governments across the region are formulating responses to the attack, with some seeing it as a victory for human rights, and others as a war crime.

Saudi Arabia supported the attack wholeheartedly, as it considers Assad a proxy for Iran, its main rival in the region. A Saudi official told Gulf News that the strikes “came as a response to the Syrian regime’s use of chemical weapons against innocent civilians, including women and children.”

Iran roundly condemned the attack, calling it a crime. “The aggression is a flagrant violation of international law and a disregard of Syria’s right to national sovereignty and territorial integrity,” reads a statement by the Iranian Foreign Ministry.

The Iran-backed Lebanese military, Hezbollah, which is fighting rebels and other groups with Assad in Syria,released some of the most vehement condemnation of the attacks. The strikes “represent direct and forthright support to terrorist and criminal gangs” reads a statement on al-Manar, a Hezbollah media company. The statement also said the Western strikes were related to aggression from Israel, Hezbollah’s main enemy.

This once again put Israel on the same side as Saudi Arabia, as Iran and Israel continue to trade accusations and cross border attacks. One Israeli official said on Twitter early Saturday that the strikes sent an “important signal… that using chemical weapons crosses a red line.”

But other Middle East leaders are reacting with more caution, with making careful statements and calling for calm.

Egypt both expressed concern for the escalation and reaffirmed its condemnation of the chemical attacks. The United Nations says it has confirmed at least 34 chemical attacks in Syria since 2013.

The Iraqi Foreign Ministry released a statement calling the attack “a very dangerous development” and saying further destabilization in Syria could increase terrorism in the region. Iraq’s military is both heavily supported by the U.S. and its Western allies, and by Iran, allied with Russia and the Syrian government led by Assad. Last month, Iraqi Prime Minister Haider al-Abadi said he plans to “keep away” from the U.S.-Iran conflict.

Turkey released a statement in support of the strikes, and has offered to mediate between the two sides squaring off on Syria, being allied with both NATO and Russia. Turkish officials have said the attacks were “appropriate” and that they were given advance warning, according to the Reuters news agency.

Arab leaders are meeting in Saudi Arabia on Sunday, and Syria is among the topics they are planning to discuss. Meanwhile, U.S. President Donald Trump is taking a virtual victory lap, tweeting, “Could not have had a better result. Mission Accomplished!”