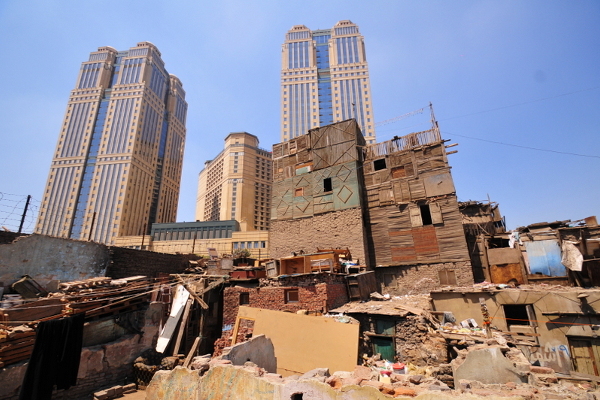 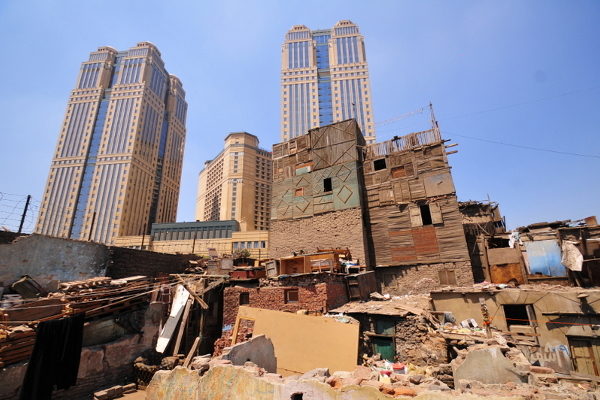 CAIRO – Many Egyptians long for rain, which can be a respite from the hot summer sun, or a chance to quench the thirst of arid land.

Khamis Ramadan is a 34-year-old farmer who works for hire on his neighbours farms, helping them grow onions. Yet the father of three actually despises wet weather and often prays for rain to never come.

“Winter is the worst season for us. The cold is unbearable and the rain is devastating,” he said.

With no roof on his rural home in al-Ayat, around 50km south of Cairo, Ramadan fears flooding.

Thirty eight villages make up the town, where most residents work as farmers or construction workers and subsist under poor living conditions. The majority of houses there do not have roofs, leaving inhabitants vulnerable to harsh weather conditions in winter and summer.

“Rain never treats us well. The house drowns. We escape the house to find shelter anywhere outside,” Ramadan said.

“I send my three children to my relatives’ houses and then I get back to the house with my wife.”

When Ramadan got married in 2011, he started building a house with mud bricks, with the help of a local NGO. According to Ramadan, the NGO provided him with 15,000 EGP ($850), which ran out before he could build a roof. He added that the small NGO has tried its best to help families in the town build houses.

“I cried when a contractor told me that it would cost twenty five thousand. I felt I will never have a roof,” Ramadan said.

There is only a wicker roof covering part of the home, which is neither painted nor properly furnished. A wicker mat and two mattresses are strewn across the floor, and a small ailing oven is the centrepiece.

“The wicker ceiling isn’t a proper roof. It’s completely useless,” he said. It does not protect them from “the rain or the sun”.

The bathroom consists of a hole in the ground that is surrounded with wooden sticks, and washing up and cleaning is done with the use of a metal canister.

According to official statistics issued in 2017, 40,000 families live without proper bathroom facilities.

“We dream of having a roof. Just a roof,” he said.

‘Living as if we are dead’

”No one can understand how we suffer except when spending a night under the sky in a house without a roof,” said Ramadan’s 24-year-old wife, Galela Mahmoud. “The whole house is open to insects, animals, and rain. We are subject to any danger because we have no cover at all.”

Due to the dire living conditions, her three children, seven-year-old Shahenda, six-year-old Yasmine, and three-year-old Ezzat, are always sick.

“Ezzat always suffers from chest problems. We go to the clinic twice a week and the medicines are very expensive,” she wept while looking at her son’s pale, thin body.

The young parents said the government does nothing for them.

“No one asks for us. No one tries to help. We are living as if we are dead,” Galela complained.

Not far from Khamis lives his 27-year-old brother Amr, who is a father to three daughters aged between six months and four years.

Amr is also a farmer who lives in the same extreme conditions as his elder brother.

“I have nothing to say. Many people come and see our situation and promise to help and then they leave and never come back,” he said angrily.

“What comes back to us is the rain and the harsh winds that make us feel like we are naked and have no worth at all,” Amr added.

‘We live in fear’

In the village of Kafr Tarkhan, Salwa Eid, a 30-year-old housewife, explains what she and her family have endured every winter for the past five years.

“We are always afraid. There is no roof. There is no door. Any rain can make us run away after midnight to hide our children at any other house.”

Eid’s husband is also a farmer. They have two sons and one daughter together.

“I just need my children to live in comfort without fear or worry,” she said.

When Eid got married 10 years ago to her cousin Mohamed Abdel Naby, they lived with her husband’s family for five years.

Later on, they got help from a local NGO to add to the sum of money they had borrowed from a friend to build their own house. The total amount of money he collected was 22,000 EGP ($1,246).

The poor family gives their friend 200 EGP ($11) monthly to pay off their debt.

Every night the family huddles together in one room and gets under the only two light blankets they own.

“We all gather on the ground and spread the blankets and sleep. We do our best to get our kids covered first,” said Abdel Naby, who cannot afford to buy beds for his family.

Abdel Naby said that they had tried to borrow some money to build a roof, but the prices of building materials soared with the rising inflation.

Mostafa, eight, the family’s oldest son, lives in fear of insects and uncomfortable winters. “We are afraid to enter the toilet alone. We fear the scorpions in summer and the cold in winter,” he said.

According to residents, scorpions, weasels and mosquitos are quite common in the area.

For 15 years, Ahmed Saeed’s family lived in a normal apartment. But the 40-year-old construction worker was obliged to leave the two-room flat that cost them 100 EGP monthly ($5.60), as the owner needed it for his son who got married in February 2016.

Saeed, his wife, and six children had to divide themselves among their relatives’ homes. “It was a horrible six months. We were shattered,” recalled his wife Hanan Amer.

The family borrowed 20,000 EGP ($1,136) from family and friends with the goal of building a small home to shelter them all. Yet the money was not enough to cover expenses for the roof.

“They were hard days. You can only imagine that the wind blows in from everywhere and the sun is inside the house all day in summer, and the angry sky rains directly on your head,” she added.

However, to their family’s delight, this winter was merciful to them.

El Ekhlas, a local NGO, was able to help them cover expenses to build a roof for their house.

“In two days, everything was done,” Saeed said happily.

“The house is now closed on us. It’s my own kingdom,” the wife said joyfully. “Only now I can sleep without worry. I can close the door of my children’s room and sleep.”

According to Hamada Ghallab, a volunteer at El Ekhlas, there are at least 200 homes without roofs in the poor villages of al-Ayat.

“The problem emerged because poor people here cannot afford to build a complete house. They run out of money when they finish building the walls, so the houses are left open to the sky,” he explained.

The NGO is currently working on funding roofs for these poor families. They depend on charitable donors to fund their project.

“We found out that these people need roofs as a basic need, as they need food and medicines,” said Ghallab, who oversaw the building of Saeed’s roof.

“People get sick or lose their humble belongings when their houses are flooded,” he added.

“We still have at least 200 houses that need roofs. It would be hard to build them all with our limited budget, but we will do out best,” Ghallab said.

Khaled Sedeek, the executive director of the Slums Development Fund (SDF), a government body affiliated with the cabinet, told MEE that building roofs is not enough.

“There are 850,000 people living in insecure slum areas in Egypt, with a total of 215,000 families,” he said. “We don’t agree with those who build roofs. We have plans to develop these areas completely.”

“Our plan is to build new, complete, suitable houses, not only a roof.”

In 2016, Egyptian President Abdel Fattah al-Sisi vowed to move all residents living in unsafe slums to new flats over the next three years in a project expected to cost about 14 billion Egyptian pounds ($1.58 billion). The complete complex is expected to house 100,000 people.

“Our mission is establishing a new life [for people], not painting or restoring a house,” Sedeek said.

While thousands of slum dwellers have benefited from government projects and have moved to new flats in the Tahya Misr (Long Live Egypt) development project in the last couple of years, hundreds of thousands of others have lost all hope.

Asmaa, the mother of three children, who refused to give her full name for safety reasons, said that broken promises are what the government keeps on giving.

“We always hear such sweet words from one time to another. They raise our expectations and leave us dreaming of a better life, but [it is] in vain,” she said.

The 28-year-old mother’s name is on a waiting list to have a roof built by the NGO El Ekhlas.

“Will we die while waiting for a roof?,” she said