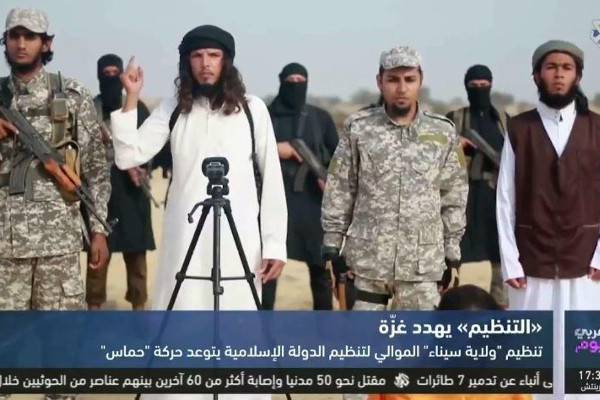 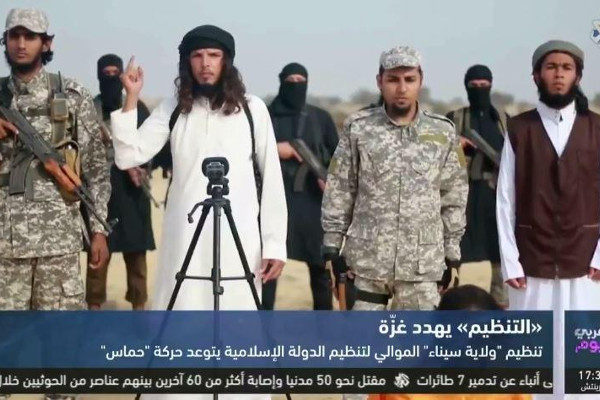 The ISIS terror group has released a new video from its Sinai Peninsula branch, in which it threatens to target rival Hamas in the Gaza Strip.

ISIS is accusing the Palestinian militant group of cracking down on jihadists and not taking a stronger stance against the U.S. decision to recognize Jerusalem as Israel’s capital.

In the 22-minute, undated video, titled “Community of Abraham,” ISIS accuses Hamas of attempting to ease tensions with the West, and encourages its followers to attack Hamas targets across Gaza.

“The apostate Hamas gang group has taken advantage of the grand place of Al Aqsa mosque, which God has placed in the hearts of Muslims to accomplish political gains, even if the blood of Muslims was a price for those worldly gains,” said the video’s unknown narrator, referring to Islam’s third-holiest site, which is in Jerusalem.

“Their struggle changed from jihad to dismiss the Zionists in the land of Muslims to a struggle for the control of Gaza,” the Arabic-speaking narrator says in the video that surfaced Wednesday on the social media site Telegram.

For their part, Hamas leaders downplayed the ISIS threats and dismissed the video as a “Zionist production.”

Hamas spokesperson Salah al-Bardawil on Thursday accused Israeli intelligence of being behind the video in order “distort the resistance.”

“It is naive to engage in the analysis of this issue as an ideological one,” al-Bardawil wrote in a tweet. “It is necessary to quickly deal with it as a security issue linked to the occupation.”

The enmity between ISIS and Hamas is not new.

While both groups are designated as terrorist organizations by the United States and Israel, ISIS sees Hamas as a nationalist movement that does not adhere to the strict interpretation of Islam. It has accused Hamas of trying to moderate itself to work with the U.S.-backed Palestinian faction Fatah, in order to appeal to the West.

The two groups are also at odds over the role of Iran and the Lebanese Shiite group Hezbollah in the conflict between Israel and the Palestinians.

Hamas in the past has publicly announced it was receiving weapons and money from Tehran. ISIS, which has been engaged in a fierce battle against the Iranian-backed Shiite militias in Iraq and Syria, sees this as a betrayal of the Sunni sect.

The ISIS video begins with a clip of U.S. President Donald Trump’s announcement last month that the U.S. will recognize Jerusalem as Israel’s capital. ISIS claims Hamas’ attempts “to disband Islamic law” enabled the U.S. to make such a decision.

“They have betrayed the entirety of Muslims,” the narrator says.

The video goes on to criticize Hamas’ new manifesto released in May, saying Hamas watered down its anti-Semitic language and offered to moderate its position toward Israel, distancing itself from Islamist groups in a bid for international recognition.

“We have been informed that the group of unbelievers in Gaza has declared war on God and turned its sword against those who order the rule of God,” a black-clad ISIS member, referred to as Abu Kazem al-Maqdisi, said in the video.

He accused Hamas of cooperating with Israel to crack down on jihadists sympathetic to ISIS in Gaza and work with the Egyptian government to obstruct the activities of ISIS branch in neighboring Egypt.

“They attempt to besiege the jihadists on the land of Sinai through direct security cooperation with [the Egyptian President Abdel-Fattah] el-Sissi’s intelligence forces,” al-Maqdisi added.

The Islamic State branch in Sinai surfaced in November 2014 after the militant group Ansar Bait al-Maqdis pledged allegiance to ISIS leader Abu Bakr al-Baghdadi. Since then, the group has overpowered smaller militant factions close to al-Qaida and has become the most brutal jihadist group in Egypt.

The group is responsible for the death of hundreds of Egyptian civilians and security personnel in the country’s northeast and has claimed responsibility for bringing down a Russian plane in October 2015, killing all 224 people on board.