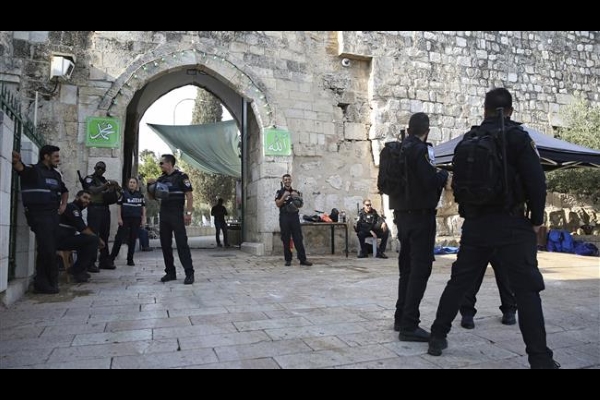 Palestinians have vowed to continue protests and confrontations with Israeli forces in occupied East Jerusalem and the West Bank, in rejection of new surveillance cameras installed at the gates to al-Aqsa Mosque compound.

“Above all else, this is an issue of control and power. It is as if they are saying that they don’t want to deal with the Awqaf, so they’re going to take matters into their own hands and monitor Palestinians through the cameras,” Mohammad Abu al-Hommos, a Palestinian activist in Jerusalem’s Old City, told Al Jazeera.

“I want to go in and out of al-Aqsa as I please – who are they to surveil me?” he added. “I am entering a house of worship. It violates the individual’s personal space. Palestinians will continue to resist because we reject these measures. It is our right to reject.”

After a security cabinet meeting late on Monday, a statement from Israeli Prime Minister Benjamin Netanyahu confirmed that the cabinet “accepted the recommendation of all of the security bodies to incorporate security measures based on advanced technologies … and other measures instead of metal detectors”.

Israel said the “plan” would be implemented within the next six months, with a budget of 100 million shekels ($28m). Some of the proposed alternatives to the metal detectors include cameras with thermal systems that can detect weapons and a facial recognition feature.

Despite the removal of the metal detectors, experts and lawyers say the cameras are an even bigger threat to Palestinians, presenting yet another violation of international law.

“These cameras will be able to detect faces and identities. This means that Israel is imposing complete control over the al-Haram al-Sharif area. The Jordanian role is being sidelined and the presence of Palestinian guards becomes null, because the real players are going to be those behind the screens watching the cameras,” Khalil Shaheen, a Ramallah-based political analyst, told Al Jazeera.

“There are large numbers of Palestinians who refuse to pay Israeli taxes in Jerusalem, and many from the West Bank who enter Jerusalem on Fridays without permits [illegal under Israeli law], as well as activists and others. For Israel to know who these people are is very dangerous and could harm these Palestinians,” he added. “This is a new form of surveillance and control … Palestinians must reject such measures, because these cameras are more dangerous than the metal detectors.”

For more than a week, Palestinians have refused to enter al-Aqsa Mosque compound and resorted to praying outside, after metal detectors were installed following an attack on July 14 that killed two Israeli police officers.

The attack, carried out by three Palestinian citizens of Israel who were shot dead, came in the context of what has been termed the “Jerusalem Intifada (uprising)”, which began in October 2015. Since the uprising began, some 285 Palestinians have died in alleged attacks, protests and raids. Simultaneously, 47 Israelis have been killed by Palestinians in car-ramming and knife attacks.

The installation of metal detectors caused civil disobedience and spurred protests by Palestinians, who viewed the new measures as Israel’s attempt to impose further control on the holy site.

Israel, which illegally annexed East Jerusalem in 1967, imposes control throughout the Old City through the presence of its forces and more than 400 cameras lining the alleyways of the World Heritage site. Plans to install similar cameras on the gates to al-Aqsa have been floated by the Israeli government over the years, but were rejected by Palestinian leaders and locals.

“The Israeli government has announced the presence of a large number of security forces, along with the cameras, for the coming six months to secure the site … These measures are neither necessary nor proportional to their purpose,” Yara Jalajel, a Palestine researcher at the Cairo Institute for Human Rights Studies, told Al Jazeera. “They exceed what Israel, the occupying power, is allowed to do to ensure safety and public order. These measures seem to aim to ensure control and impose a de facto sovereignty over the site, which Israel does not have under the law.”

Usama Halabi, a lawyer and writer on Israeli surveillance practices, said that surveillance of Palestinians is already the status quo in the Old City.

“I don’t understand the issue surrounding the cameras. It is definitely an intensification of the surveillance through more technically advanced cameras, but they can already see who goes in and out of al-Aqsa and the Old City,” Halabi told Al Jazeera.

“The camera feeds into their computer systems and they can find out everything about me already. They can extract my whole family tree in minutes,” he added. “On a daily basis, I see tens of young men in court who they bring in after a week or two of seeing them on the surveillance cameras, and accuse them of throwing stones and they present the video proof. Some of the soldiers and guards in the Old City have built-in cameras in their headgear, and every group of soldiers that is stationed in the Old City has a handheld camera with them to film confrontations.”

Still, for Palestinians, the issue of installing cameras on the entrances to the al-Aqsa Mosque compound is yet another manifestation of Israeli control over the holy site.

“Agreeing to the new measures means agreeing to Israeli control over al-Haram al-Sharif and over Palestinians even more,” Shaheen said. “What matters to us is that Israel is sticking its fingers into the eyes and throats of Palestinians, and we must reject it.”